I downloaded the owners manual for the Dominion voting machines. There is a flow chart that outlines how the process works. If you look closely you will see that two folders of scanned ballot files are created as images. These files should immediately be subpoenaed as evidence in all questionable counties. If fabricated ballots were entered or same ballots scanned multiple times, the proof would be here. If the files were destroyed, even more evidence of a conspiracy. 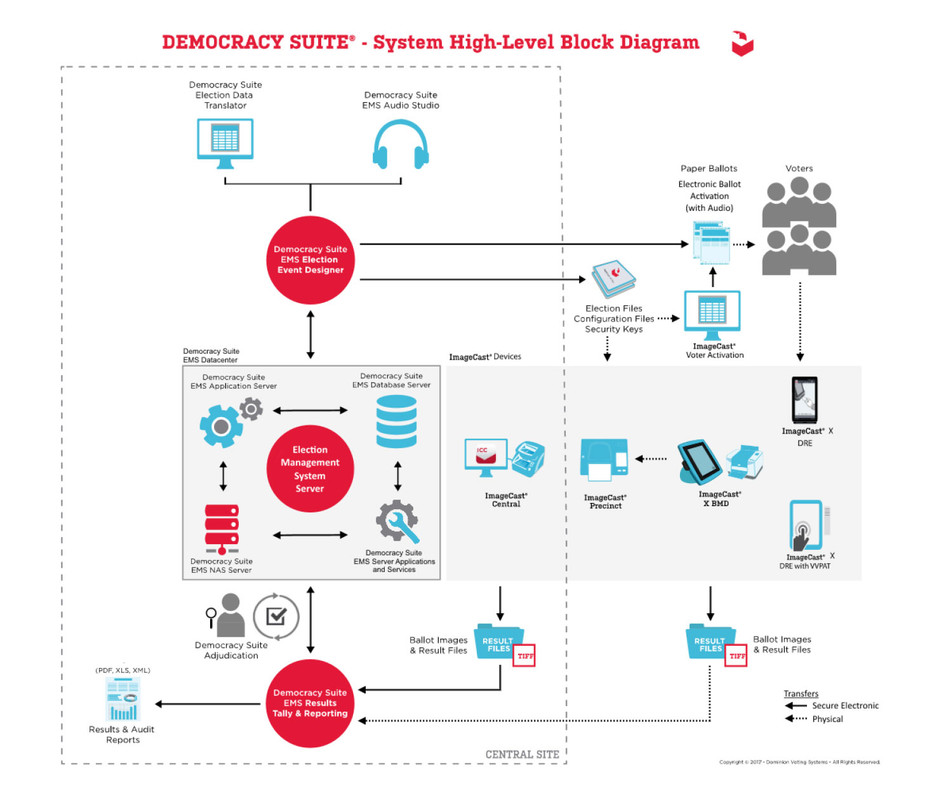 Trump’s win was an enormous landslide w/ at least 80 million votes......so many, many more votes than the fraudsters
had previously calculated, that they had to resort to on-the-spot engineering to get a rough alignment between
(A) the fraudulent paper ballots pouring in, and, (B) the in-place software fraud.
Let’s get the word out——the USSC does NOT have to overturn an election. Donald won enormously from the get-go.

The USSC has only to rule on (A) the fraudulent Biden ballots, and, (B) the software fraud.

As in Bush/Gore, the USSC ruled voters were denied “equal protection”....since some voters were giving privileges other voters did not.

ACTION NOW-—Contact your US Senate reps.
You can fax free from here: https://faxzero.com/fax_senate.php

You can get phone numbers here: https://contactsenators.com/party.php?party=republican

TALKING POINTS
<><> We will not be silent in the face of a coordinated coup attempt by high-level Democrats to fix the election for Biden.
<><> We demand a special, emergency investigation of the Dominion Voting machine systems and affiliates infecting our election system.

It would be particularly interesting to see the scans of those 140,000 ballots at 6 AM, 100% all for Biden, and possibly not even voted downballot.

Start at 8 minutes in. (Before that, he’s talking about getting Kyle R. sprung from jail in time for Thanksgiving.)

Our votes went to 3 other companies. In Frankfurt and Barcelona our votes were manipulated by Smartmatic. (They are Amazon servers.)

The servers are run by another company called Scytl. That is where the manipulation is undertaken. The Scytl servers report out to another company called Clarity. Clarity did the real-time reporting that you saw on TV. That’s why so many people caught instances on TV where you had 560 votes disappearing from the Republicans and 560 being added to the Democrats. That was when they did the vote flipping.

But what happened to them was they had to institute massive fraud on the paper ballot portion of the fraud because Trump won by such a huge margin on the same day in-person election day, that they had to stop the count in several key states, so they could bring in truckloads of false, fake mail ballots, 100 thousand in Detroit for example, all of them for Biden, no votes down ticket, many of them in pristine conditions, like I’ve seen in Georgia.

[Then Lin Wood talks about the Electoral College, and how Trump can still win despite the massive multi-level theft of this election.]

According to Lin Wood, the plan was to have Biden be announced President Elect by the media, and then set up a shadow-govt to create confusion about who is running the country.

I transcribed/paraphrased as well as I could, please listen to it all at the link. There is a lot more!

7 posted on 11/21/2020 7:42:24 AM PST by Travis McGee (EnemiesForeignAndDomestic.com)
[ Post Reply | Private Reply | To 1 | View Replies]
To: RBW in PA
These files should immediately be subpoenaed as evidence

But who has the ability and the will to do that? The FIB? DHS?

I’m a software architect. I’m horrified that our elections have been handed over to companies that could do anything they want. This architecture, even IF there were true intent on maintaining integrity, is riddled with security attack vectors.

This thing is a security nightmare. Anybody familiar with penetration testing and doing a Threat Analysis and Risk Assessment would look at that diagram and just shake their head.

...and that is IF the goal was to maintain election integrity. The opposite is far more likely. I can only conclude that anyone in a position to buy this system is either incredibly naive or knows exactly what they’re getting.

This must stop NOW.

I’m sure those images have been “accidentally purged” by now.

As I have said since election night, the Democrat fraudsters were the gang that could not shoot straight. They were very well organized on process but disorganized on implementation. They lost control and did not cover the down ballots on paper or electronically. It’s pretty bad thievery.

I work in IT, and that was my first thought as well.

Like Democrats usually are. They are, for the most part, emotional creatures who don’t think through things.

...I belong to PUNJABI Sikh American family, and most of my friends are in Trucking business, as owners and drivers.

All of them from California, and every single one of them voted for President TRUMP.

One of the reasons given in Texas for not certifying the devices was that those images were often not clear and legible, for unknown reasons.

The setup and staffing is far less than that, and the worst part of it is, I have been long convinced it was designed exactly like that for a reason. I hate thinking that, but there it is.

By the way, great Freepname! Brought a smile to my face...

My dad, a 30 year Navy guy, was an inveterate smoker of the Pall Mall brand. Washed them down with about ten cups of strong coffee a day. Classic Navy man.

And he always had a cup of black coffee in one hand, and an unfiltered Pall Mall in the other.

I admit, I was fascinated watching his ritual. As I watched, he would tap that red package with the white writing a few times to coax a butt out of the pack. He would deftly snatch a Pall Mall and stick it in his mouth.

He would pull out his Zippo lighter (which was always so fully filled that when he lit it, the big yellow flame would be about three inches high and an inch or two wide, it seemed) and hold the flame in front of his face.

Then, with a practiced tilt of his head to the side to avoid burning his eyebrows or hair (when he had it) he thrust his face towards the flame and stopped with the tip of the cigarette just in the flame, and, with narrowed eyes, ignite the cigarette.

Eyes still narrowed, he would draw on that cigarette, then after a second, would emit a billowing cloud of smoke as the butt dangled from his lips.

Hahahaha...he’s been gone twenty years now nearly to the day, and it made my eyes misty to imagine that scene I must have watched ten thousand times or more. Heh, he was a three pack a day guy, and I was ardent “Dad watcher”...I tried to emulate everything he did. The way he walked. The way he wrote. I sure do miss him, but...I cannot think of him now with anything approaching sadness. I have a big grin even as I write...:)

LOL, that said...I never DID take up smoking, even though I have begun smoking a pipe a few years back.

Anyway, back to the burning present and the ho-hum Constitutional Crisis we are experiencing!

Did they legalize marijuana where you live, and can I have some of what you are smoking? :)

Your world is a lot more fun than the real world we live in where people stupidly voted for Joe Biden because they were told they had to hate Donald Trump.

My FreepName came about from various sources, mostly from the famous street in London, which coincidentally the cigarette brand is named after.

I really don't know what will happen. The least I want is for Dominion to go down in flames -- their name right now is mud, or should be at this point. They should be the Milli Vanilli of software companies, and I hope Biden-Harris become the Rosie Ruiz's of politics.