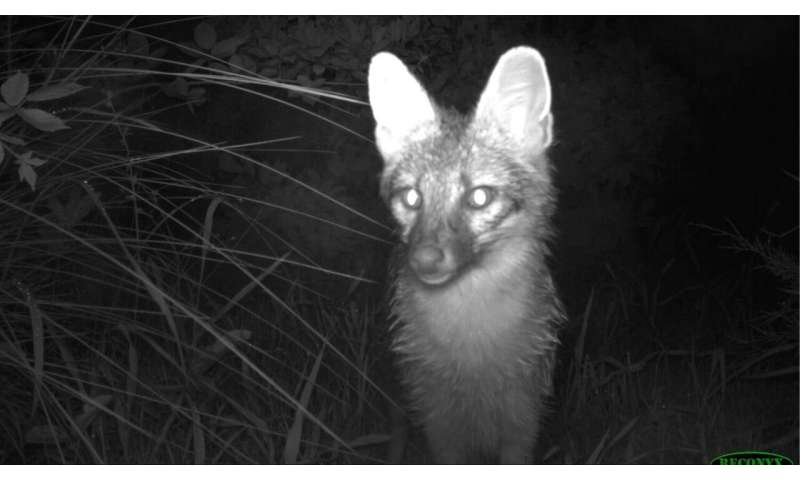 A new study used camera traps to study what might be drawing wildlife to people's backyards.

To see wildlife in the Triangle, sometimes you need go no further than your own backyard. A new study helps explain why some animals are sometimes more often found in suburban areas than wild ones: because people are feeding them—sometimes accidentally—and to a lesser degree, providing them with shelter.

The study, published in Frontiers in Ecology and Evolution, was designed to understand what scientists call the "urban wildlife paradox." While scientists know human development generally causes biodiversity loss, they've also found that moderately developed areas can have an abundance and variety of mammals compared with wild areas.

"There's this idea that nature and humans don't coexist well," Kays said. "But what we've been finding is that when it comes to mammals, especially in North America, they actually do pretty well around people. You end up with high abundance. You expect there to be fewer animals, and there's actually more."

Researchers wanted to know why that is. To test whether food and shelter are attracting animals, researchers set up cameras in the backyards of 58 homes near Raleigh, Durham, and outside of Chapel Hill, as well as in nearby forests in rural and urban areas nearby for comparison. The study was conducted in collaboration with scientists at the University of Montana.

"This basically confirmed the urban-wildlife paradox, showing that some species are more abundant in yards," Kays said. "It's not a big surprise if you live in the suburbs—you see the animals. It's the squirrels, raccoons, deer and opossum."

Feeding animals—mainly at birdfeeders—had the strongest impact on the abundance of animals in a yard. Eastern gray squirrels were the most common sight at feeders. They were more common at feeders than in suburban or rural forests. Other common species at feeders were cottontail rabbits, raccoons and opossums.

"This supports the idea that direct human subsidies are a big part of the explanation for the urban-wildlife paradox," Kays said. "It shows that individual decisions by homeowners and private property owners can have a big impact on the wildlife in the backyard and living in the area."

Predators such as coyotes and foxes were slightly more common in yards when other prey animals, such as squirrels or rabbits, were more abundant. However, the effect wasn't strong—the researchers said it would take the number of prey to increase by 713 times to double the number of predators in the yard. They only observed one coyote and one red fox eating compost.

"There was some attraction to prey, but it was a pretty small effect," Kays said.

Kays said the findings raise questions about what homeowners should do, and whether attracting wildlife is good or bad.

"You see widespread recommendations: Don't feed the bears. Where do you draw the line from small birds to squirrels, rabbits and raccoons? When does it become bad to feed the animals, even if you're doing it accidentally?" Kays said. "On one hand many people enjoy having wildlife around and they can help support a healthy local ecosystem; however, they could cause conflict with people."

TOPICS: Outdoors
KEYWORDS: Navigation: use the links below to view more comments.
first 1-20, 21-24 next last
1 posted on 10/27/2020 10:50:18 AM PDT by SJackson
[ Post Reply | Private Reply | View Replies]
To: Iowa Granny; Ladysmith; Diana in Wisconsin; JLO; sergeantdave; damncat; phantomworker; joesnuffy; ..
Outdoors/Rural/wildlife/hunting/hiking/backpacking/National Parks/animals list please FR mail me to be on or off . And ping me is you see articles of interest.

If you feed them they will come.

4 posted on 10/27/2020 10:54:13 AM PDT by Rurudyne (Standup Philosopher)
[ Post Reply | Private Reply | To 1 | View Replies]
To: SJackson
"On one hand many people enjoy having wildlife around and they can help support a healthy local ecosystem; however, they could cause conflict with people."

True dat. When I used to party with my friends in the back yard, occasionally a jackalope would come in and try to convince us to fight each other.

Tell me about it. The black bear population here in PA is exploding. In some areas people have been forced to spring for expensive bear-resistant trash containers.

Any reasonable suburbanite could have told them this. Bambi-lovers feed corn on the cob to deer, who also eat landscaping shrubbery and flowers, enraging neighbors btw. . Squirrels feast on nuts and fruit from trees, dig bulbs planted in gardens, and eat vegetables and berries. Rats gather to eat bird feed which has fallen from bird feeders. Coyotes come to the city to eat rats and mice, runaway cats and probably garbage. Far from “destroying habitat,” the burbs are a lush smorgasbord for wildlife.

I’m just west of Minneapolistan. I can see it from my porch.
There is gobs of wildlife around here everyday.

“The black bear population here in PA is exploding. In some areas people have been forced to spring for expensive bear-resistant trash containers.”

I suppose the leftwads would lose their minds if you turned the bear into meat, jewelry, and a nice robe.

Same goes for the homeless.

Send them to the Black Bear diner. The food there will quickly give them heart attacks (1700 calorie breakfasts and the like) and then the bear problem is solved.

My ‘back yard’ is the Mountains and critters abound up here. Big ones, little ones, crawling ones, slithering ones, and everything in between. I’m the ‘24 hour all you can eat’ go to place for ‘em in winter. When the deer are here and the wild turkeys cruise thru at the same time, their battles are a flat out riot! The turkeys usually run the deer out! Fun to watch!

I have a pet wild 1-ton bull buffalo named Bill who I hand feed, and of course, my pet 1000 pound polar bear named Louis who roams my house. :-)

Does it come with donuts or pastries?

15 posted on 10/27/2020 1:33:43 PM PDT by dakine
[ Post Reply | Private Reply | To 12 | View Replies]
To: SJackson; All
I had a fence company built me this bird feeding station. The uprights are driven 30" into the soil and covered with HD chain-link fencing. There has been evidence of bears climbing on it but they have never breached it. This is in the Eureka Ca city limits 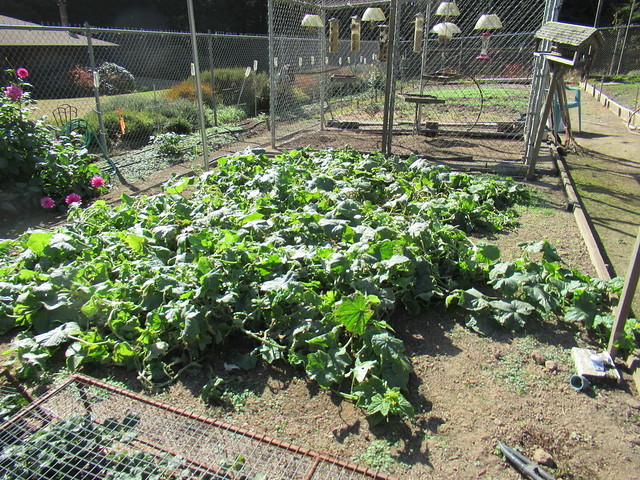 They are extra. But the the salt shakers at the table have very large holes.

Stop turning these animals into Democrats.

They are extra. But the the salt shakers at the table have very large holes.

I’ve seen several white tail deer under my window in my suburban Baltimore apartment. There are no large woods near me either. This one buck was munching on the yew hedge here.