In NYC and other Dem created hotspots - releasing dangerous prisoners "for Covid-19" is an excuse to chip away at the rule of law, President Trump, and our country.
6/30/2020 | vanity

Gosh, I wonder what would happen if you released dangerous criminals and told them to cover their faces to conceal their identity. Wait! Wait! What if you REQUIRED them to wear masks?! 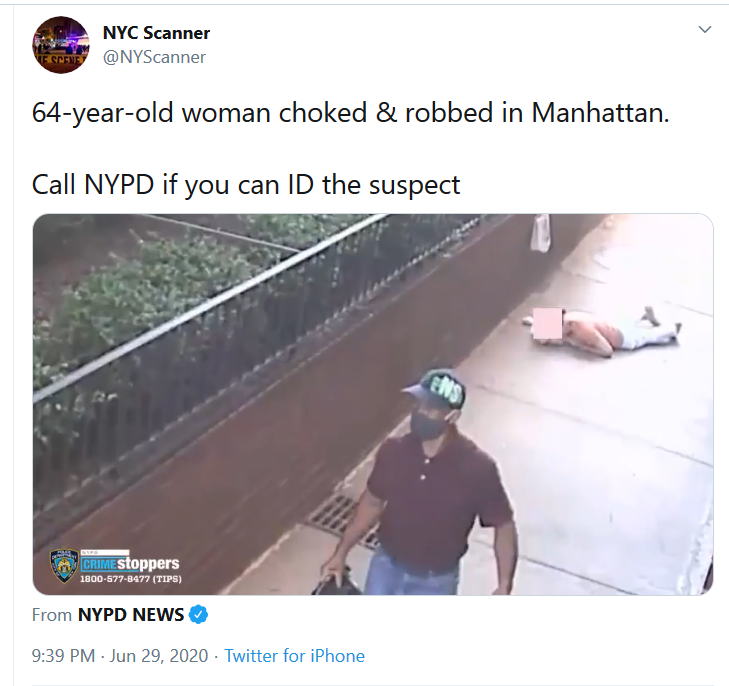 The video is heart shattering. She's defenseless and he's so confident striding around choking out women and taking their handbags while masked.

Twitter link - 64 year old woman choked and robbed in NYC
But WHO would release dangerous criminals like this?

“As an example, when we learned last week that [Brann] was about to use her authority to order an across-the-board release of hundreds of inmates serving city sentences, we were assured that the release would not include those serving time for domestic violence or sex offenses, given the risks to victims,” the letter states. “Unfortunately, we later learned that such individuals were indeed included in the ranks of those to be released.”
"De Blasio said Sunday that more than 650 inmates had been released over coronavirus concerns."

NYPD Brass: We're Arresting Too Many Prisoners on Early COVID Release "Hundreds of prisoners released early from Rikers due to COVID concerns are being enabled to re-offend again and again without consequences, law enforcement leaders say."

But why do this? Why encourage lawlessness and predation? Simple - it's the CIA playbook for toppling a country. They've used this technique world-wide for decades. Here, The Atlantic was proud to share with its readers what is happening to our country and why. Note that I don't agree with The Atlantic's approval of the attempt to collapse our nation.

The Antlantic's Article, titled "The Trump Regime Is Beginning to Topple" provides insight into the riots, disbanding of police, stripping of military

It’s totally clear that this is a planned revolution. Example - eliminate bail requirement. Basically de-criminalize crime. Then bring virus. Then “oh poor widdle cwiminals, let them go free for their health”. Then demonize and defund the police.

The Demsheviks want chaos, violence, and deaths - iow, a reign of terror.

a member of the more radical majority of the Democratic Party, advocating immediate and forceful seizure of power by the proletariat.

a member of the American Communist Party.

a contemptuous term used to refer to an extreme radical or revolutionary.

At this point, all Democrats are Demshevik. It has become the Demshevik party. Now it’s in the open. I saw it somehwere, didn’t make it up myself.