A 21-year-old man was live streaming on Facebook as he and others looted a gas station and restaurant during civil unrest in San Bernardino, Calif., two weeks ago, police said.

The man, Terion Alexander Jr., was arrested on charges of looting, burglary and conspiracy, according to reports.

Looters damaged businesses and set fires in San Bernardino during the night of May 31 and early in the morning of June 1 following an afternoon demonstration and march through the city’s downtown over the death in Minneapolis, Minn. while police custody of a black man, George Floyd, the East Bay Times reported.

In a news release, San Bernardino police spokesman Sgt. John Echevarria said the Facebook Live video “was open to the general public and it showed Alexander and possibly three other subjects proceed” to a Valero gas station.

“Alexander and his associates were seen looting and removing the property from the business,” he said.

Alexander was also seen vandalizing the Wienerschnitzel restaurant across the street from the gas station, Echevarria said.

these a days , everybody’s got a video camera with an uplink to a satellite ( iPhone ). and these are all young stupid morons ( who else with Loot to start with ? ).

So they all filmed themselves ( this moron live-streamed ). and then put it on Instagram

So the police are just sitting there on their computer going “ OK we got this guy!”

Now of course here’s the problem in liberal areas you get DAs that are on the criminal side. Literally.

Fakebook, twatter, instaturd, etc are all tools for law enforcement

You don’t need to do old school police work when the criminals post their crimes to their profile. It is almost too easy. 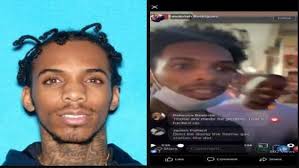 You would think that local Community Colleges might offer an associates degree in looting/pillaging etc. These dweebs keep making the same mistakes.

Takes pride in his appearance.

Yeah the endings of all of these movies are bad.

criminal DA barely slaps them on the wrist.

many probably not even held overnight.

“Looting” is a racist term. It should be called “undocumented shopping” to be politically correct. Sarcasm off.

George Carlin “Picture how stupid the average person is. Now realize half of them are stupider than that.”

Since “PD Live” has been canceled maybe it’ll get replaced with “Criminals Live”.