Democrats Are Using Your Tax Dollars To Silence You and Defeat President Trump in 2020.
05/02/20 | vanity 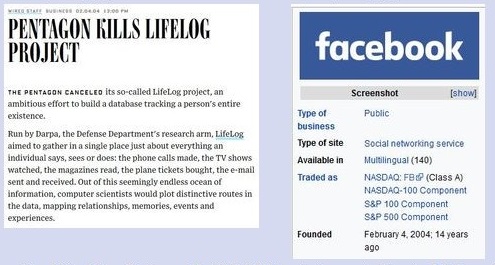 Now, "All your life's experiences are belong to us!" But Hillary lost the 2016 election and President Trump is dismantling the Deep State's grip on American surveillance. The head of DARPA was forced out in 2019, but tools DARPA developed are still around.

Department of Defense DARPA funds, otherwise known as tax payer dollars, helped build Google and many other aspects of social media, AI, and technology. Those "assets" are also being used to attack President Trump and silence Patriots.

Isn't it nice to know that creeps in charge of "innovations" like Google, FaceBook etc. didn't just come up with these ideas in the garage or at college - they were total front men/women for DARPA/DOD. But what Department of Defense's DARPA funded projects are now being used to censor/silence those oposing Deep State narratives. Adam Schiff recently wrote a letter to Youtube and Twitter leaders asking them to tighten up their censorship of Covid-19 discussions and to send those who "accessed" information about content like HCQ to receive the counternarrative to correct their understanding. We've got a Congressman directing the DARPA built technologies just how to propagandize and censor Americans. Who pays for Adam Schiff's congressional salary? Tax Payers? The Dems have NOTHING to offer but are using our tax dollars to defeat conservatives and to fight President Trump.

Today there's an article in SFGate.com bragging about Dem's use of DARPA funded AI to counter conservative support for President Trump approaching the 2020 election.

As described in the article, a 2020 election "initiative" called Defeat Disinfo, run by Curtis Houghland, is using DARPA AI to try to manipulate public opinion approaching the 2020 election - the Dems are desperate as they are losing control of the MSM/Social Media lies/narrative.

Since the public was able to watch the video conference the president gave wherein bleach was mentioned, we rejected Deep State lies claiming President Trump told us to inject bleach into our bodies. Dems and other deep staters are worried about our direct access to information that refutes the MSM lockstep "narrative" so they have amassed a network of 3.4 million digital "influencers" to counter whatever President Trump says or does because we the people shouldn't be allowed to just listen to what President Trump says and decide for ourselves. And of course, DARPA AI will trace those who pro-Trump readers trust as sources of information and "target" them for counter narratives and as Houghland says, some of those 3.4 million "digital influencers" countering pro-Trump sites and users will be paid operatives.

The CIA and Pentagon wallowed in tax payer funds for decades building AI, Google and other surveillance systems to topple governments foreign and domestic while surveilling Americans' lives. Houghland says in the article that the AI he is deploying was originally paid for with DARPA funds to combat, in part, "Islamic Extremism". What gives him, the Dems or the Deep State the right to use Tax payer funds to disrupt the 2020 elections!??

If Americans are ever to be free we need to cut down the federal government the size it was before the World War I.

America got along just fine before the communist welfare state was imposed on by voluntary charity and charitable organizations. The government is stealing from us to control us.

There needs to be a constitutional amendment that abolishes the federal income tax and forbids federal welfare payments for any reason. If any State wants to step up and fill the gaps then fine because we can always vote with our feet move to another State.

That’s why my social media go to is FR, Gab, and BITCHUTE.

Also, since taxpayer dollars were used to set up the other sites such as facebook and google, I do not believe that they should be able to ‘”censor” free speech.

Because of their origin, they are not a truly private company-they should be treated as the “town square”.

Many of the voices kicked off of twitter have switched to Gab.

4 posted on 05/02/2020 2:50:34 PM PDT by greeneyes ( Moderation In Pursuit of Justice is NO Virtue--LET FREEDOM RING)
[ Post Reply | Private Reply | To 1 | View Replies]
To: wildcard_redneck
If Americans are ever to be free we need to cut down the federal government the size it was before the World War I.

I know of few other Freepers other than me to make such a declaration. I say it all the time but feel like it goes unheard, misunderstood, and/or basically ignored.

My theme for many years now has been a constitutionally-based cry for freedom against the tyranny of the federal government which I say is 80+% unconstitutional.

I love Trump but his "Keep America Great" falls way short of what needs to happen.

As my tagline reads, MAGA means restoring our Free Constitutional Republic by dismantling the 80%+ unconstitutional portion of the feds which, as you say, was created since around 1900.

Thanks for posting. Deplatforming YOU? No EXTERMINATING your voice. Next up, your life. Locate X. Eliminate X.

We did not defend the Constitution on Usurpation Day.

Pre-Civil War size would be nice.