'The WHO lied and people died!' Anger at star-studded benefit to raise $150M for group and its under-fire chief who Lady Gaga called a 'superstar' despite claims organization was complicit in Chinese coronavirus cover-up
dm ^ | 4/19/2020 | griffith

A star-studded televised concert featuring music legends and political figures has drawn angry online backlash for raising money for the controversial World Health Organization, amid allegations that the group is beholden to China and badly mishandled the early stages of the coronavirus pandemic.

The two-hour 'One World: Together at Home' event, led by the WHO and non-profit group 'Global Citizen' was broadcast across multiple television channels in the U.S. and overseas on Saturday.

The event's corporate sponsors and other donors have already given $150 million, earmarked for the WHO's COVID-19 Solidarity Response Fund, organizers said.

Earlier this month, President Donald Trump pulled all U.S. funding for the WHO, accounting for about half of the group's budget, pending an investigation into the group's handling of the pandemic, and particularly its relationship with China.

That didn't stop, and perhaps encouraged, the who's-who lineup of stars who joined the One World concert, including Taylor Swift, Paul McCartney, The Rolling Stones, Beyonce, Oprah Winfrey, Idris Elba, Lizzo and Lady Gaga, who gushed that WHO Director-General Tedros Adhanom was a 'superstar.'

TOPICS:
KEYWORDS: bribery; concert; corruption; followdamoney; oneworldtogether; who Navigation: use the links below to view more comments.
first 1-20, 21-40, 41-48 next last 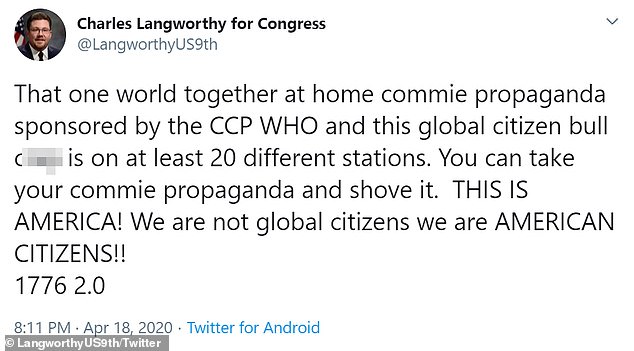 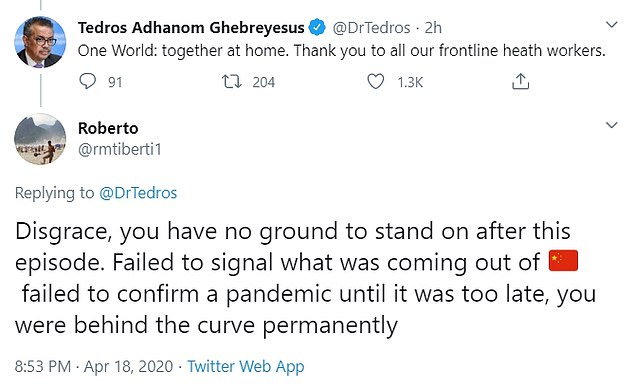 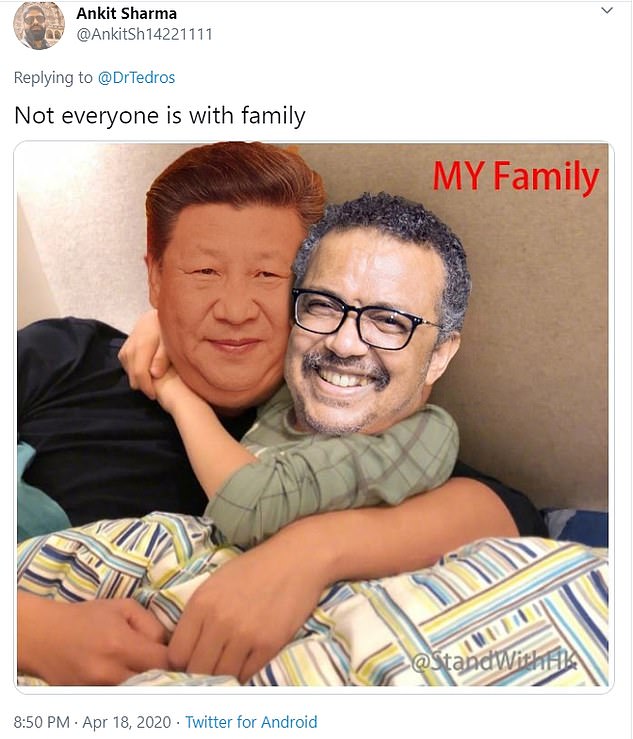 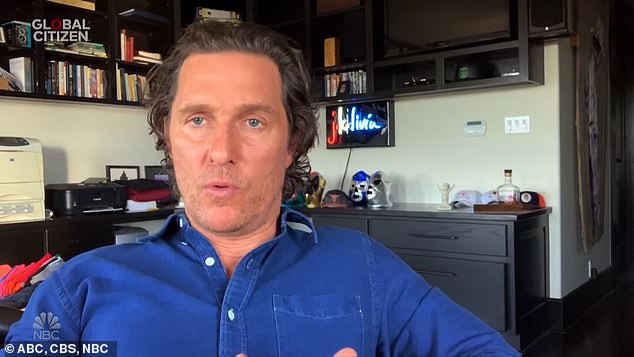 problem with celebrities, they have money, want to relevant, and cameras follow them around.

These Hollywood idiots have embraced the World Health Organization, because :

1. Since Trump cut off funding, they are in meltdown mode over that.

2. They have no clue what the World Health Organization does. But based on the name, and concerns about health around the world with this virus being a worldwide problem, they decided that support of the W.H.O. fits their political agenda.

Hey, if liberals want to donate their own money to WHO, that is fine with me. In fact, they should do it every month to make up for the tax money they are no longer getting. Better that liberals’ disposable income go to WHO than that my tax dollars go there.

She participated in Hillary’s Spirit Cooking.

So she must be spiritual.

Half of ‘em prolly think its the rock band

Yeah I heard shes into that. Very dark stuff indeed. 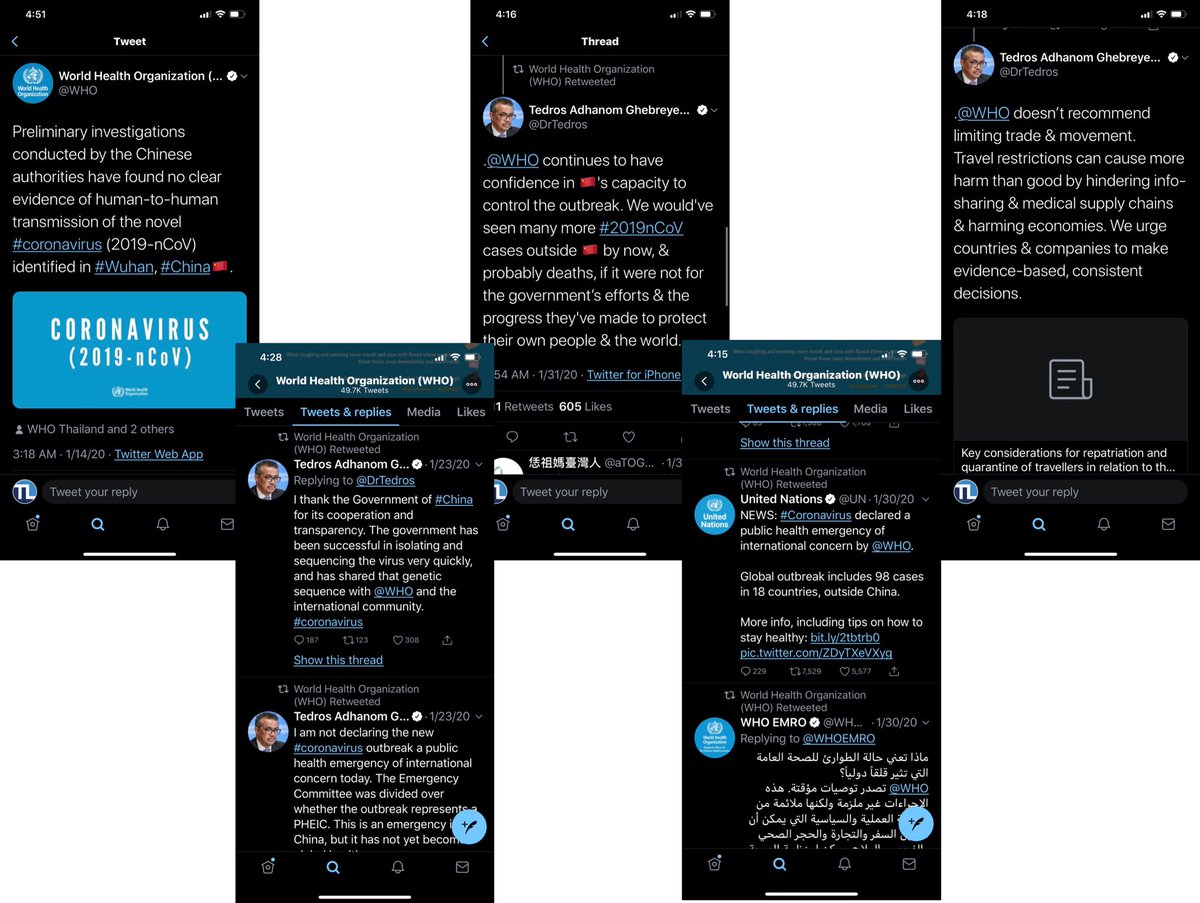 Roger and Pete disagree. Keith and John unavailable for comment.

11 posted on 04/19/2020 9:33:48 AM PDT by Rebelbase
[ Post Reply | Private Reply | To 1 | View Replies]
To: RummyChick
Remember We Are the World back in the 80s? All the singers pleading for help with Africa starvation. When later it was determined that corrupt UNICEF officials were either pocketing funds or giving it to warlords instead of going to the people.

These global organizations need to be shut down, or not be funded by a single dime of taxpayer money.

I for one, am happy for these Hollywood low lives to continue paying for the WHO, so US taxpayers can continue to save themselves over $600 million every year.
What is there not to like?

My wife had it on for awhile and we were cursing at the TV.

It was positively treasonous.

Bill Gates lectured us on the importance of ‘equity’ from his $150M mansion.

Oprah lectured us on the importance of ‘social justice’ from her $80M mansion.

Jennifer Lopez (Jenny from the Bel Air block) lectured from her $40M mansion.

Stephen Colbert was the most sickeningly smug of all the brain-dead talk show hosts, lecturing us on we need to keep the shut down going because experts who are much smarter than us little people, like Dr. Fauci, say so.

All mixed with effusive unmitigated praise for the WHO, and condescedning “aren’t we stars wonderful because we remember the little people?” praise of health care workers.

and what have you done?

you opened the bat cave

Was fine with it, even though I knew it was done in concert with W.H.O.-R.E.

However, Teodros came on camera to extoll the virtues of this event and it became clear this is a P.R. stunt to give cover to the CCP and the organization directed by him to rehabilitate and give cover to these people who have committed crimes against humanity.

Apparantly, their great secret was not good enough to share with the rest of China but, must be some sort of gift for the rest of the world as their asymptomatic carriers of death were permitted to kill untold numbers around the globe.

In fact, Teodros didn’t get around to calling CCP-19 a pandemic until the middle of March 2020.

China and Teodros knew well before then the scope of this disease but, waited until more than 140 countries were afflicted by this horror, unlike SARS which W.H.O declared a pandemic after it spread to 70 countries.

Bottom line, XI, The CCP, Teodorors and the W.HO-R.E. are directly responsible for suppressing information and good science about the CCP-19 are criminals and should be held accountable, which I hope they are once we are on the other side of this disaster

How will we ever know what to do without their insights??

Is the sarcasm tag really needed?

Hollywood is not only stupid but worthless too. My dog has more smarts.

Very Trumpian. With his knowledge of TDS he maneuvers the left into loudly supporting WHO and it’s Chinese puppet chief. Now Trump will produce the evidence of WHO/Chicom complicity in the spread of the pandemic.