VALLETTA (Reuters) - The wreck of a British submarine, which vanished at the height of World War Two, has been discovered lying at the bottom of the sea off Malta, university marine archaeologists said on Thursday. HMS Urge had been based with other submarines in Malta and had carried out several deadly missions when the British navy ordered it and rest of the flotilla to redeploy to Egypt because of a relentless German siege of the Mediterranean island

. Urge set sail on April 27, 1942, carrying a 32-strong crew, 11 other naval personnel and a journalist. However, it failed to reach Alexandria on the agreed rendezvous date of May 6 and its fate has always been a mystery - until now.

A team from the University of Malta, which has spent two decades surveying the local seas, said that at the request of the grandson of Urge’s commander, they combed an area this summer that had once been heavily mined by Nazi forces.

A sonar image revealed a submarine-like shape at a depth of 130 meters (425 ft) some two miles (3 km) off the coast and a subsequent search by an unmanned diving craft revealed the U-Class Submarine, with a large chunk of its bow missing.

A Sonar (sound navigation and ranging) image shows a submarine-like shape at a depth of 130 metres, which marine archaeologists from the University of Malta say is the wreck of British submarine HMS Urge that vanished during the Second World War, lying at the bottom of sea off Malta. University of Malta/Project Spur/RPM Nautical / Handout 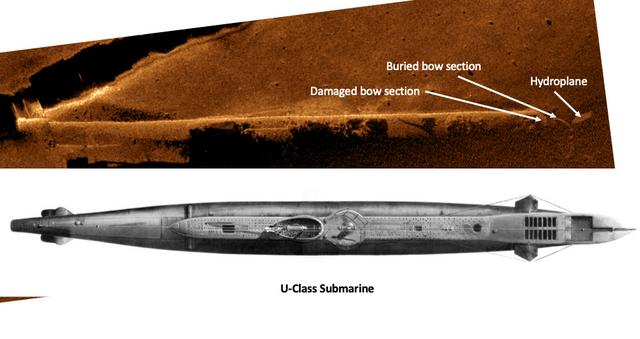 GGG ping. Another discovery of a WWII submarine.

Probably hit a mine. RIP, sailors.

I have claustrophobia. Just thinking about being in one of those things makes me want to walk outside into the night sky.

I went on a tour of a fast attack sub way back in the late 70’s . I’m 6’5”. I ducked often. I had a hard enough time serving on aircraft carriers. They were some brave souls to serve on submarines.

The one at Pearl Harbor a Balao or Gato class was huge compared to the Getman or British subs. I toured it last dec 6th.

Great post. The people that found this deserve great credit for endlessly searching to find what happened to those that made the ultimate sacrifice for the most noble reasons. And God bless those entombed in that wreckage.