FM stations in south GA are still running Stacey Abrams paid radio ads (on black-rap stations - recruiting people who could claim they had "any problems voting" ....

Follow the money and see where it leads. In my opinion, someone should organize investigate teams of retired LEOs and military veterans willing to donate their time to dig out the evidence of fraud and corruption being used by the Marxist Progressives.

Purpose is to maintain black victimhood mentality to keep them on the Demonrat plantation.

She’s a disgrace. We were in Thomasville last night and folks were disgusted by her.

She must admire Winnie Mandella.

Didn’t she say last night that she plans on suing even though she knows Kemp won?

Ambulance-chasing lawyers, hoping to make a buck? Seems like a long shot to me...

More likely DNC agitators, building a database for the endless demonstrations/protests any Republican must face if they should defeat a black candidate.

In any case, might be wise to find out who's doing this and why.


Somebody oughta nail her under Georgia's RICO laws enacted to nail greedy criminal govt officials. She has quite a history I'm told.

(RICO is routinely used to try to prove that a legal business was being used for illegal means, and, in at its inception, RICO was used to prosecute drug traffickers or organized crime members).

In recent years prosecutors have applied RICO to crooked government officials: (1) those accused of using their public offices for personal gain, and, (2) tax-paid officials of govt agencies using public monies to flout the law.

To bring a case under Georgias RICO law, there must be at least two underlying felonies such as fraud, bribery, witness tampering (among other felonies).

RICO allows prosecutors to include multiple defendants charged with various crimes in the blanket indictment, and to charge that govt employees, publicy-funded and publicly-sanctioned entities were allegedly part of an ongoing criminal enterprise.

ITEM---Any public official using tax dollars to flout that law is a lawbreaker.

ITEM-- in cases where govt officials on the public payroll not giving public notice is a violation at the federal level of the 1946 Administrative Procedure Act, which requires notice in the Federal Register. Laws demand that taxpayers have the opportunity to submit views in writing.

ITEM-- If proof is established that RICOed criminal public officials impaired the commercial and economic activity of the region, that could also be prosecutable under the Hobbs Act. 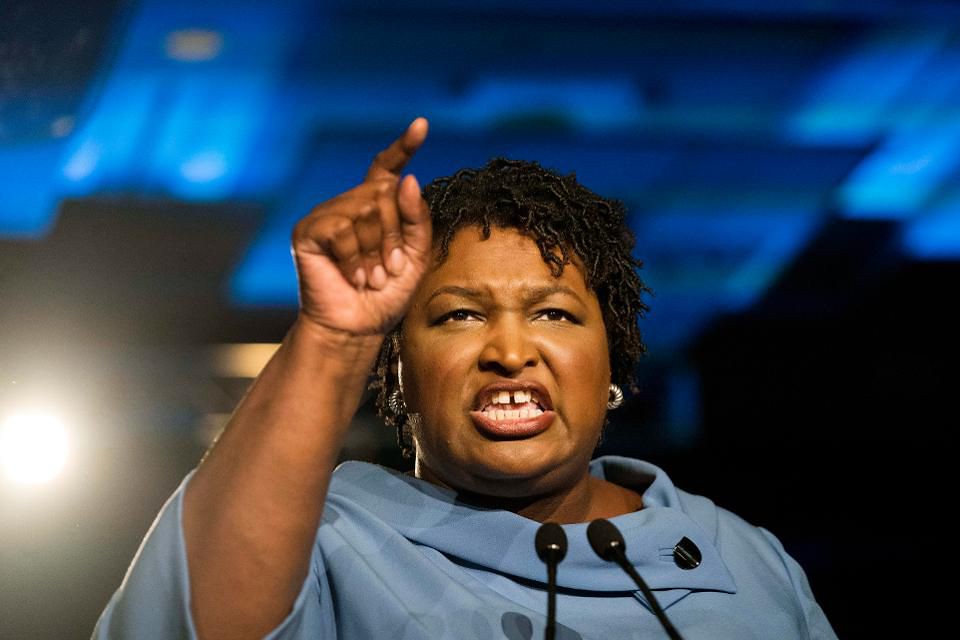 “She must admire Winnie Mandella.”

Understand that Blacks would like to turn the USA into South Africa!

Seeing how they handle it when they lose power, it’s clear how they’ll handle having it.

One of the problems here is that the Democrats are constantly screaming about “voter suppression” but this is not real... it’s a ploy to fight off any reformation of the election system. Truth is that if you want to vote things have been made pretty easy for you to do so.
Problem is, Abrams believes the ploy and is gonna try to prove after the fact the the election was “stolen” through suppression, and problem two is a lot of weak-minded suburban women are going to believe it.

The only difference between us and South Africa is that there they have a black majority.

She needs to write book about coming in second place and travel the world blaming whitey for it.

“The only difference between us and South Africa is that there they have a black majority.”

Give them time! Blacks here are working on their women 24/7 to remedy the problem. Ditto for the Mexicans.

“...problem two is a lot of weak-minded suburban women are going to believe it.”

This is actually our country’s #1 problem. Too many of our women are soft in the head when it comes to politics! Given voting preferences today, our country, sad to say, would be better off if women could not vote! Flame away, but it’s true! Women I know hate Trump because of his “womanizing,” and completely miss the fact that even if that’s true, he’s still the best President we’ve ever had. Even my two daughters hate him.

Of course, these black-rap music stations are going to continue to run these spot announcements. The check cleared, after all....

Voter intimidation is not nearly the problem it was a generation ago, and what goes on now is much more likely to black-on-black kind of suppression, with Black Panthers casually strolling back and forth at the polling station, carrying a baseball bat in their right hands and slapping it occasionally in their cupped left palms, all the while with very grim scowls on their faces.

She is offensive to all good and true Americans

she should be eithER jailed or sent to the kitchen to mix pancake batter......LOL