The French Pacific islands of New Caledonia began voting Sunday on whether to become an independent nation, in a closely-watched test of support for France in one of its many territories scattered around the globe.

Some 18,000 kilometers (11,000 miles) from the French mainland, New Caledonia is home to a quarter of the world’s known supplies of nickel — a vital electronics component — and is a strategic foothold for France in the Pacific.

Voting in New Caledonia’s 284 polling stations opened at 8:00 am local time Sunday (2100 GMT Saturday) and was to end at 6:00 pm, with results expected the same evening. The participation rate was 41.8 percent at midday, compared to 27.3 percent at the same time during local elections in 2014, the High Commission said Sunday.

Some 175,000 people are eligible to vote in the remote islands fringed by spectacular beaches, with opinion polls predicting a large majority in favor of staying French.

But there are fears the referendum could inflame tensions between indigenous Kanak people, who tend to favor independence, and the white population, which boiled over into deadly violence in the 1980s. The quasi-civil war claimed more than 70 lives. It led to the 1998 Noumea Accord. which paved the way for the steady devolution of powers as well as Sunday’s referendum. …

This is where it’s useful to have things like the beloved British Monarchy to unify people under a ‘Commonwealth.’

I know a lot about New Caladonia.
.
.
.
That’s where the guys on McCale’s Navy would always visit for R&R!

Red China has been making significant “fishing” and construction inroads into the western Pacific region, a fact largely ignored by the western/US media.

As I recall, Libya once tried to buy into some of the islands, and Red China, besides having significant influence in Vanatu, has made some overtures or inroads inti strategic Fiji, where a maoist organization was vying for power.

What Americans never read in US history is that the Soviet-directed Communist Party USA made a strong bid to takeover the US colonial island chain known as Hawaii, in the late 1940’s.

CPUSA cadre under the leadership of later Prof. Ewart Guinier (Harvard Un. chairman of African Studies) and his wife, Eugenie, set up “canteens” for American servicemen stationed there. They propagandized for the Soviets to the point that the US Naval Commandant of Hawaii threw them out as subversives.

The Senate Internal Security Subcommittee, Sen. Judiciary Committee, held a series of hearings (with Appendixes) between Feb. 8, 1956 and Sept. 24, 1957, amounting to Volumes 1-90 plus Appendixes to the Hawaii hearing Dec.(3,4) 5-6, 1956. Exposed as a CPUSA/Soviet plot was the CP-dominated newspaper the Honolulu Record, once of whose key writers was Barack Obama’s friend (and often called one of his mentors), Frank Marshall Davis (of CPUSA activities in Chicago, and sent to Hawaii by two Soviet agents/CPUSA leaders, harry Bridges, president of the ILWU (International Longshoremen & Warehouse Workers Union - totally CPUSA controlled out of California, Oregon and Washington State, and Paul Robeson (singer, actor, etc), a longtime Soviet agent (should have been KGB but might have been Soviet military intelligence, the GRU).

All this is documented not only in the SISS hearings but also in Prof. Paul Kengor’s very important book, “The Communist: Frank Marshall Davis: The Untold Story of barck Obama’s Mentor”, Threshold Editiosn/Mercury Ink (a Division of Simon & Schuster), 2012.

The ILWU, led by CP operative Martin Hall, was the key organized subversive organization engaged in trying to help the CPUSA, takeover the nascient Democrat Party movement. Fortunately a then patriotic, Democrat liberal former military hero and rising young politician named Daniel Inouye (and other WW2 vets), thwarted this takeover, along with the defection of “Jack Kawano” whose testimony in 1956 helped expose what was really going on right under the noses of the liberal establishment.

Red China is going to continue to probe, bribe, and subvert Pacific islands through business opportunities/port construction contracts, under the table donations to leftist and opportunist political figures, exacerbate tribal/Islander vs. French/British/American inhabitants, and propagandize against any ties to the US, French or British/Australian military including the establishment or use of existing bases there.

I hope our Pacific Command is on the ball there. I didn’t feel that it was under the Obama traitorous regime. 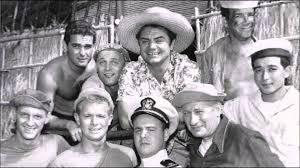 I have a deceased aunt who served as an Army Nurse on New Caledonia during the war.

Well, I hope we’re stirring the sh.. in their backyard too. We should be.

Good post. Triad groups have also become part of the Chinese effort in the Pacific, since the 80s and 90s and especially since Hong Kong passed from British to Chinese rule.

New Caledonia is dirty as hell and I saw NOTHING of France when we were there this spring. It’s NOT like what we saw on McHale’s Navy....Trust me!

My dad served on Biac and New Caledonia.