Young Swiss women will be obliged to attend an “information day” about military service from 2020 in order to encourage more to join the army, according to reports.

Currently, military or civil service is compulsory for all Swiss men over 18, who must pay an exemption tax if they are excluded due to health reasons or refuse to serve. It is not compulsory for women, but they may choose to volunteer. Last year, only around 65 women out of 7,600 recruits began their service.

In February this year, army commander Daniel Baumgartner said in an interview that he wanted to increase the number of women in the army because they “think and act differently”, which would be “good for the army”. …

If they are in it to kill the islam threat, then go for it!

Urine be upon the filthy islam filth.

Thinking and acting differently would be good for the Swiss Army? How ridiculous. The Swiss have a good military system, they shouldn’t muck it up with PC stuff. 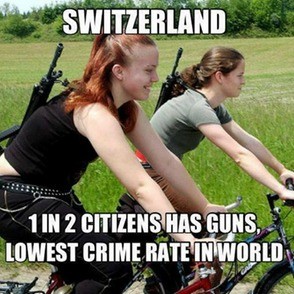 Seems like the male conscription + female volunteer system was already pulling in the capable women that the military needed. Of course, Switzerland taxes the citizens who cannot serve or refuse to, so maybe this is an underhanded money grab.

Not enough men in Switzerland? Or perhaps the Swiss are anticipating an external problem...

Switzerland is good country. The only area besides Italy and Ireland I’d be inclined to visit.

There’s no better way to lower the birth rate. If there’s a war, it gets even worse.

I think there are other reasons, (cough-cough) there is not much crime there, but I am a horrible person

Yup, exactly what I was thinking. I wonder how many moslim women will sacrifice marriage, children and family for a career or military service?

It would be interesting if we did that here. Two years of service in any branch of the military or Peace Corps, Americorps,or US Public Health Service. Buy out $100,000.

This story is fake news.

This story is fake news.

Oh well. Still think we should draft everyone here at 18 for two years service

Switzerland has always been a puzzle for me. Requiring military service is not in accord with liberal freedoms, yet they are a country not willing to let someone else pull the weight for their own defense. They kept Nazi confiscated gold which was reprehensible, yet provide protection for money against state interference.

They also function too much on referendum to make decisions.

Yes. Call me weird, but when we landed in Zurich the sight of officers walking around with full automatics in the airport gave me a sense of peace.

Apparently however Swiss officials can stop a citizen say in Zurich and demand identification. I don’t agree with that.

I would like to hear the argument for it? Americans opposed efforts from the British the conscript them, did they not?

Apparently however Swiss officials can stop a citizen say in Zurich and demand identification. I don’t agree with that.


I lived there 10 years and no one ever asked me for ID on the streets. However, when citizens go to vote, they do ask!

This may be another case of Travel Books being full of shite. My bad.