Ancient hominids who were intrinsic to the Americas?

This pre Clovis possibility has the leftist politico-pseudoscientists’ panties all in a twist.The 1st people in America MUST only be those politically defined at present!

Pre-Clovis people are evident. Their spoor was found at other sites: Pennsylvania’s Meadowcroft Rockshelter and Chile’s Monte Verde.

Soon we will find more of their bones. Meanwhile the political fires, charges and counter charges of racist science continue:

“Analysis of these finds dramatically revises the timeline for when humans first reached North America, according to new research.”

NO NO NO NO NO!!!!!! Timeline is SET, a consensus among scientists says there can be no changing!!! Big Bang!! Evolution!! Cataclysmic meteor!! Land bridge!!
Continental drift!! Global Cooling!! Global Warming!! We were THERE!!! We saw it ALL!! We know it all!! Anyone who disagrees is WRONG!!! \sarc

I love it when something like this pops up.

Down in South America, you have the Bonampak murals showing negro people:

And the colossal Olmec heads:

Plus the evidence of an Asian race shown in Olmec masks:

Better not ask how these people reached South America, or where they came from. 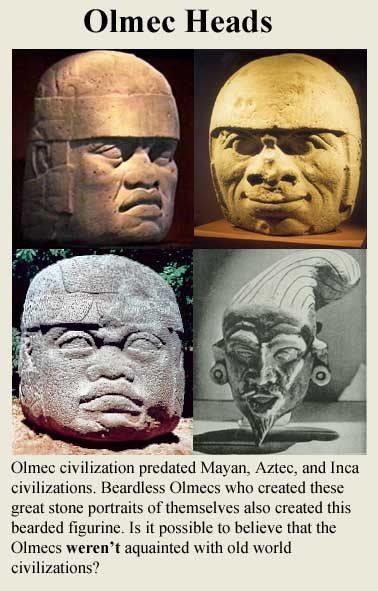 The Izapa Stela Number 5 illustrates the arrival of a Caucasian people on a raft, bringing with them a living palm tree...and possibly SLAVES of African origin.

...Broken bones and rocks yield evidence that pushes back the record of early humans in North America by more than 100,000 years...

The Pitfalls of Radiocarbon Dating