by KATHERINE TIMPF September 15, 2015 and guess what? If you support her, you are. Newsflash: Hillary Clinton thinks you’re stupid. And if you still support her, then you must be stupid, too. During a speech at Northern Iowa University on Monday, Clinton actually had the audacity to declare that sexual-assault survivors have a “right to be believed.” How noble! How feminist! Hey, Hillary, here’s an idea: If that’s really what you think, why don’t you start with believing Paula Jones, Juanita Broaddrick and all the other women who have accused your husband of sexual assault? I mean, is she serious? Did Hillary really think that everyone would have just forgotten about these women? Perhaps she forgot about them herself. After all, their troubles never really seemed to be all that important to this trailblazing “feminist icon.”

One thing’s for sure: Clinton’s campaign has been full of hypocrisy. She’s been quick to slam anyone who opposes gay marriage, despite having declared in 2004 that “marriage is not just a bond, but a sacred bond between a man and a woman.” She’s been calling for criminal-justice reform — arguing that imprisoning people “does little to reduce crime” — despite having called for more prisons and tougher sentences in 1994. All of that was bad enough, but this is worse. Now she’s moved beyond saying things that merely contradict what she’s said in the past to saying things that contradict the way she is currently living her life. SHARE

Earth to Hillary! You cannot preach that sexual-assault survivors have a “right to be believed” when you yourself are married to an alleged rapist! There’s no explanation that makes it acceptable. The best-case scenario is that Hillary didn’t mean what she said, doesn’t believe her husband’s accusers, and is a complete hypocrite. The worst? She did mean what she said, does believe her husband’s accusers, and just doesn’t think that what happened to them is really all that big of a deal.

Either way, she’s the worst. Yes. The worst. Look, regardless of the fact that Hillary happens to be a woman, having her in the White House would not be a victory for feminism. Think about it. How is, “Hey, ladies! If you marry a president and stand by him as he’s repeatedly accused of sexual assault, you too can be the president someday!” feminist? Hillary is a fraud and a hypocrite, and she’s banking on the fact that you’re too stupid to notice. Her sinking poll numbers don’t shock me, but what does is that she still has anyone supporting her at all. My mom always taught me not to call people names, but if you’re one of these people, then you know what? You’re stupid. — Katherine Timpf is a reporter for National Review

Hitlery is right-anyone supporting her is stupid.

This is a fastball down the middle. Trump needs to hit this gift out of the park.

Hillary thins I am stupid, and the feeling is mutual. 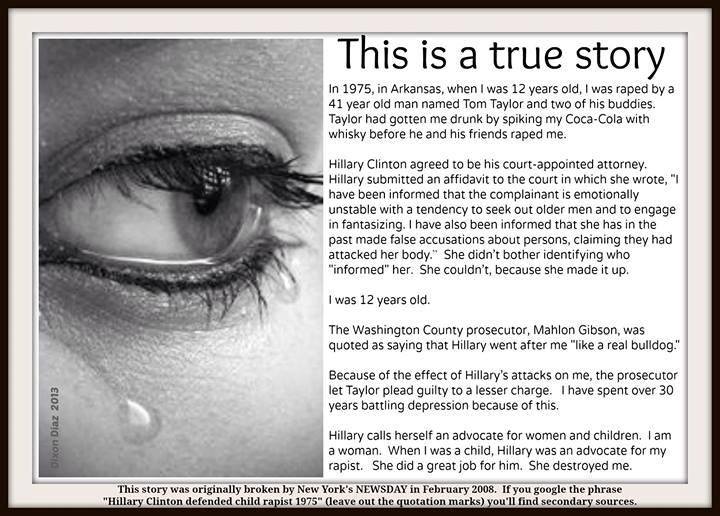 The Clinton’s are nasty grifters who destroyed peoples lives along the way. I am glad to say I believe her time as come and gone. She will not be President. She should be behind bars,though. Her and her husband, both.

She is an old, demented hag, with nothing to do, she’s gay one day, still married, but her husband is off to some island with young girls...

She doesn’t have any friends, she never has had I don’t think...

She lies, she steals, she’s a killer (Benghazi), she ugly...

The best place for her is in a rest home where no one can see or hear from her anymore....or Prison would suit her fine, but she’s never be put there...

I’m so stupid that I most defiitely won’t be voting for her.

“Hillary is a fraud and a hypocrite, and she’s banking on the fact that you’re too stupid to notice. Her sinking poll numbers don’t shock me, but what does is that she still has anyone supporting her at all. My mom always taught me not to call people names, but if you’re one of these people, then you know what? You’re stupid.

I am really surprised she would bring up issues of sexual assault, when her husband has been in the middle of so many such accusations, and she herself has been implicated in cover ups and character assassinations against such women.

Well, slap my thigh and call me Shirley!

That’s why they always mess things up .. they think we won’t catch on .. or be able to figure it out.

Anywhere I can tell her what I think of her?

I wonder who is advising this woman. This is the most laughable thing I have ever heard. I think someone wants her to shipwreck.

She's been a screwup her entire life.