a new one, right? That’s what I was thinking.

George Taylor: “Take your stinking paws off me.....”

There is one thing dumber than listening to the rodeo clown, and that is asking it a question.

When my cats play and one tries the shoulder pat, he quickly gets a couple of kicks in the gut

What’s with the big goofy smile? What’s to smile about?

Perry showed an incredible level restraint, for sure.

GOPERS always show a lot of restraint in the face of evil leftists, it is the conservatives they call “heartless” and rage against. 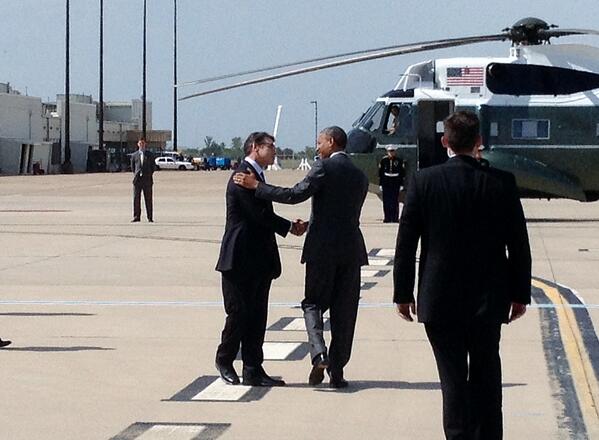 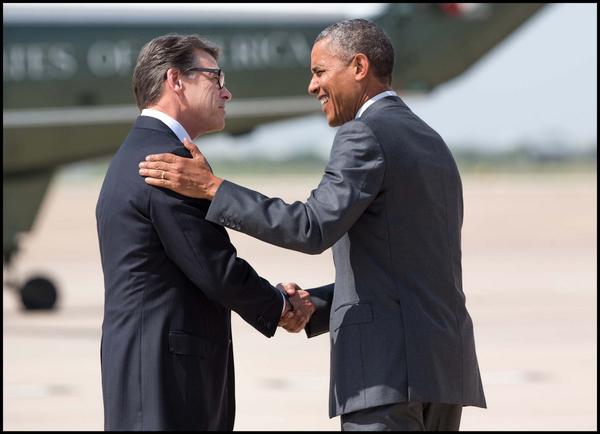 Perry doesn't seem to be smiling back.

Perry should call him a MOFO to his face!

That's always good for getting meetings off the ground!

31 posted on 07/09/2014 3:06:48 PM PDT by hummingbird (Mark Levin and Article 5. Period.)
[ Post Reply | Private Reply | To 30 | View Replies]
To: DallasBiff
What I would LOVE to see is Obama gets off the plane and is immediately surrounded by a posse. The chief LEO, addressing him by all of his known aliases, slaps handcuffs on ‘im and announces he is under arrest for treason and fraud. I know, I know. But if any border governor had the stones, they would keep him in high security prison, and to h-— with the protests.
32 posted on 07/09/2014 3:10:05 PM PDT by Missouri gal
[ Post Reply | Private Reply | To 1 | View Replies]
To: hummingbird

Shepard SmithVerified account ‏@ShepNewsTeam #BreakingNews: President Obama meets with Texas Gov Perry on the immigration crisis - but in Dallas, not at border

Ugh. Perry looks like a fan in that photo.

Different take on that one. I think he looks like he’s pissed off.

Perry has his job cut out for him.”

I would feel a whole lot better if it were Ted Cruz meeting with Obama.

Perry is giving 0 the squinty eyes, no smile, just a grimace.

‘Perry showed an incredible level restraint, for sure.”

Yes because Rick Perry is a mature adult and a professional person. I would vote for Rick for President just because he could stand to shake the POS’s hand without barfing all over the tarmac.