Navigation: use the links below to view more comments.
first previous 1-20, 21-26 last
To: Amberdawn
While googling for a photo I saw this image of Turing as a small child..wearing a sailor suit. What a sweetie, look at that cute little face :-) 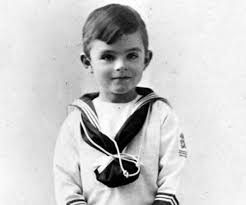 To start with a swag is your bedding roll etc - usually wrapped in canvas. A Swagman was someone who lived out of their swag (that they rolled up and carried in their travels). Many of them in early Australia would have maybe been shearers or farm workers that walked from job to job, from sheep station to sheep station. Either that or they were what we would call bushies who basically just like to live free and would live in the bush and only come into town when they needed supplies.

They could be a bit free with other people’s possessions. In the Aussie song ‘Waltzing Matilda’ the Swagman steals a Jumbuck (sheep) and ends up committing suicide in a Billabong (watering hole) when the cops catch up with him.

Thank you!! I was wondering if anyone would catch this. The compromising of Enigma was due to Polish Mathematicians recreating a Enimgma, more or less, sight unseen. Still, the machine is useless without the code keys. Enigma, itself, was essentially unbreakable. It's the daily keys that were required. If Turning had accomplished such a feat, why did the RN go to incredible lengths to steal one and the key books? A brilliant man, but this is pure agenda hype.

Thanks for the info...
Watch this short youtube clip.
Excerpt of “Waltzing Matilda” from “On the Beach” (1959)
http://www.youtube.com/watch?v=-n7LwzODzQg

He IS cute! I miss the days when parents dressed children up nicely.

What a great film ‘On the Beach’ was. I had not remembered that version of the song though - Australian’s do not normally sing it as a Negro Spiritual but rather an Aussie(see Irish) ditty.

Love the version though - initially thought it might be Paul Robeson but it gets a bit too light at the end for him - Who sings it?