Ted Hoff saved his own life, sort of.

Deep inside this 73-year-old lies a microprocessor - a tiny computer that controls his pacemaker and, in turn, his heart.

Microprocessors were invented by - Ted Hoff, along with a handful of visionary colleagues working at a young Silicon Valley start-up called Intel.

This curious quirk of fate is not lost on Ted.

In 1969, the company was approached by Busicom, a Japanese electronics maker, shopping around for new chips.

It wanted something to power a new range of calculators and asked for a set-up that used 12 separate integrated circuits.

Ted believed he could improve on that by squashing most of their functions onto a single central processing unit.

The result was a four-chip system, based around the Intel 4004 microprocessor. 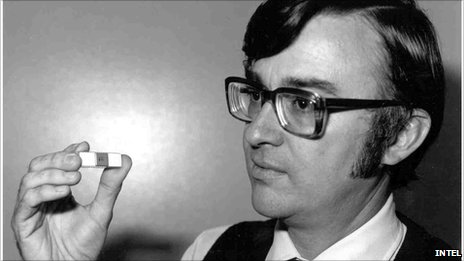 And government regulations and interference had nothing to do with this. Amazing how things get better when the government stays out of the way.

I think you’re giving the man too much credit. Oh sure, everyone knows Al Gore invented the Internet, Ethanol, and the color Green, but I’m pretty sure Gore did not invent the microprocessor.

Less Than $13k To Go!!
Just A Reminder
Please Don't Forget
To Donate To FR

I thought he invented the light bulb, the dim ones.

My dad worked for AT&T, I think we may still have a hexadecimal “computer” in the attic with the 4004 cpu.

I don’t know about them microprocessor thingies but dude sure has some cool sideburns going on.

“My favorite Marcian”, too funny! That was my favorite show when it, and I, were both new. :’)

13 posted on 05/09/2011 6:22:14 PM PDT by SunkenCiv (Thanks Cincinna for this link -- http://www.friendsofitamar.org)
[ Post Reply | Private Reply | To 1 | View Replies]
To: Signalman
And government regulations and interference had nothing to do with this. Amazing how things get better when the government stays out of the way.

Interestingly, I was just reading history of computers at the NSA, published by the NSA and covering a period from the 40s to the 60s. The government was VERY involved in the advancement of computer science.