There are a great many stories about US presidents seeing UFOs. Few of the stories actually have enough evidence to back up the fact that a sighting seemed to have taken place.

One case with strong supporting evidence involves Ronald Reagan, who had two sightings that we are aware of.

Both of Reagan’s UFO sightings occurred when he was the 33rd Governor of California (1967 – 1975). The first occurred on the night that Reagan was invited to a party at the home of actor William Holden in Hollywood.

A number of key personalities were invited. Two of them, comedian Steve Allen, and actress Lucille Ball, both told the story of Reagan’s UFO encounter.[1]

Reagan was missing when the party began and the party was held up until he and Nancy arrived nearly an hour late.

According to both Allen’s and Ball’s version of events Reagan was very excited. He described how he and Nancy had seen a UFO while coming down the coast highway to Los Angeles and stopped to watch the event. Some unconfirmed stories stated that the object actually landed.

Lucille Ball, in her account of the event wrote, “After he was elected President, I kept thinking about that event, and wondered if he still would have won if he told everyone that he saw a flying saucer.”

The other Reagan sighting occurred in 1974 just before Reagan ended his second term as governor.

The story was told by Air Force Colonel Bill Paynter, who became the pilot of Reagan’s Cessna Citation jet plane following his retirement from the Air Force.

In a story Ronald Reagan told to Norman Miller, Washington Bureau Chief for the Wall Street Journal, the governor’s plane was making an approach to land in Bakersfield California.

It was during the descent that Reagan noticed a strange light behind the plane. "We followed it for several minutes, Reagan told Miller. “ It was a bright white light. We followed it to Bakersfield and all of a sudden to our utter amazement it went straight up into the heavens."

Paynter, the pilot stated, “"it appeared to be several hundred yards away" and it was "a fairly steady light until it begun to accelerate. Then it appeared to elongate. Then the light took off. It went up a 45 degrees angle at a high rate of speed. Everyone on the plane was surprised."

Paynter added: "The UFO went from normal speed cruise to a fantastic speed instantly. If you give an airplane power, it will accelerate, but not like a "hot rod", and that's what this was like.

Governor Reagan expressed amazement. I told the others I didn’t know what it was. The UFO went from a normal cruise speed to a fantastic speed instantly. If you give an airplane power it will accelerate - but not like a hotrod, and that is what this was like.

We didn’t file a report on the object because for a long time they considered you a nut if you saw a UFO. "[2][3]

Reagan, in his discussion of the sighting with Norman C. Miller added that he had told Nancy about the UFO, and they had done personal research on UFOs.

This research had uncovered the facts that there were references to UFOs in Egyptian hieroglyphics. Reagan was telling his story in a very animated way. This led Millar to conclude that Reagan seriously believed in UFOs. He asked him, "Governor, are you telling me that you saw a UFO?"

Suddenly, according to Miller, Reagan realizing that he was talking to a reporter. "This look crossed his face," recalled Miller, "and he said, "Let’s just say that I’m an agnostic."

[1] The event is included in Lucille Ball’s book “Lucy in the Afternoon: An intimate Memoir of Lucille Ball” written by Jim Brochu, William Morrows and Company New York 1990, page 125

[3] UFO Researcher Stanton Friedman interviewed Paynter years later. “I spoke with the pilot of his plane when Reagan was California Governor. I can't recall his name now, but Don Berliner, very up on aviation matters, immediately recognized the name. The pilot had 30,000 hours which is a very high number. He confirmed that the sighting occurred and that the quotes in the National Enquirer were accurate. (Subject: Re: Reagan And The Aliens – Friedman Sept. 16, 2003 “UFO Updates” List.)

As you know President Jimmy Carter also had a ufo sighting...

Forget President Clinton, all he saw was flying ashtrays coming from the direction of Hillary... < /humor > 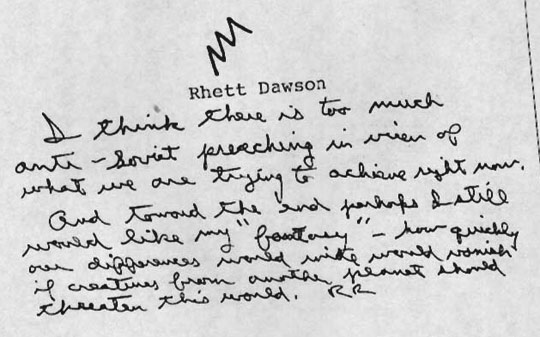 Lucille Ball, in her account of the event wrote, "After he was elected President, I kept thinking about that event, and wondered if he still would have won if he told everyone that he saw a flying saucer."

Features Terry Hansen - Public skepticism about the reality of UFO crashes stems from a near total absence of news coverage about such events. The naïve media consumer assumes that news organizations present a more or less complete picture of world events. Consequently, the absence of news about UFO crashes suggests to such people that crashes have not, in fact, occurred. Historically, however, leading news organizations have worked very closely with the federal government to censor news judged to have “national security” implications. This means that UFO crashes almost certainly would not have received much news coverage, especially by national-level news organizations. In this talk, Terry Hansen, author of ‘The Missing Times: New media complicity in the UFO cover-up,’ explains why news organizations cooperate with the government, how news censorship is achieved in practice, and how propaganda works to hide important events and reduce public curiosity. Hansen will also discuss potential ways to circumvent UFO-related media deceptions. Finally, he will discuss the concept of national security and the prospects for achieving a more open, accountable federal government