India and Russia will each pledge $6 billion to co-develop the a fifth generation fighter aircraft. Russian and Indian negotiators have finalized a preliminary design contract (PDC) after years on negotiation, just in time for Russian President Dimitry Medvedev's visit to India in December.

Business Standard quotes Ministry of Defence officials saying "The negotiators have done their job, and the Cabinet Committee for Security will consider the PDC, probably this month ... If the CCS gives the green signal, as is likely, the contract will be signed during Medvedev's visit."

Ashok Nayak. Chairman of HAL, was quoted in the past weeks saying, "It is in the system for approval .. The respective work shares have been agreed to by both sides and once we sign the preliminary design contract, we will finish the design in about 18 months. Developing and building the fighter could take 8-10 years, and each side will pay $6 billion as its share."

Both the Russian and Indian Air Forces each plan to induct around 250 fighters, at an estimated cost of $100 million per aircraft. That adds up to $25 billion on top of the development cost. The high cost presumably prompted Russia into co-development with India.

Last year high costs and economic downturn forced the United States to limit the F-22 Raptor production to 187 aircrafts - half of the estimate requirement of the USAF. Technologies in the F-22 were critical to America's technological superiority, the fighter was developed and built entirely within the US making production very expensive at $340 million per fighter on top of development costs.

Finished a BIG move, thus while I had seen the thread and responses before I did not have a cogent opportunity to comment on some of those responses. Thus I will coalesce my thoughts in one post, addressed to different posters.

SKEETER: 'This is China’s headache more than America’s.'

Absolutely correct. The Pak Fa (and the production version, whether it will be called the SU-50 or the SU-41 or SU-51 ...it will most probably end with an odd number since it is primarily air-to-air, and the fact the prototype is called T-50 doesn't necessarily mean it will be SU-50) was geared by Russia and India to face off against their main potential foe-country ....China. Not the US, but China. China has been increasing its military strength both in terms of quality and quantity, and Russia and India both needed something that would maintain a significant qualitative edge against anything Sino. The Pak Fa would not defeat a Raptor (the F-22 is truly a superlative machine) ...but it will knock out any J-11, J-10 or (future Low observable concept) JXX. With ease.

THUNDERSLEEPS: 'Will that beast be able to turn in the air? It is longer than any other fighter, even the “big” F-14, F-15, and F-22s. I thought it was supposed to replace the MIG-29, a top-shelf dogfighter. Sure, the new bird has thrust vector engines but that’s still a lot of airframe to twist into a turn... The longer it is, the more airframe you’ve got to drag through a turn, bleeding off energy (speed).'

That is not accurate. The PakFa will be FAR more maneuverable than the F-14, F-15, and MiG-29. It's aerodynamic capability may even be better in some regimes than the Raptor even. It has LERXs, 3-Dimensional thrust vectoring, and all-moving canted tails (the Raptor has no LERXs, 2-D rather than 3-D TVC, and doesn't have all moving tails). Whether or not it will be more agile than the Raptor remains to be seen ....what is fact though is that it will be more agile than any other current or proposed manned fighter. (See graphics below). 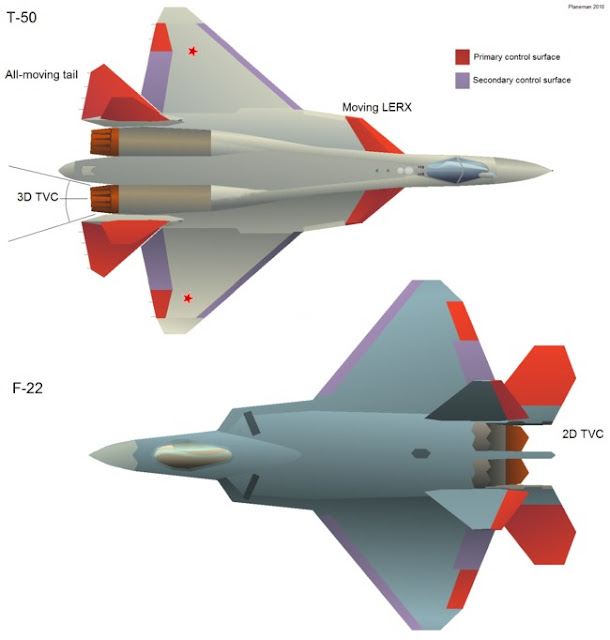 Furthermore, in terms of size I do not understand why people always make it seem like a gigantic fighter! It is smaller than the SU-30 (actually noticeably smaller), and the SU-30 is one of the most maneuverable fighters around (far more than the F-15, and FAR MORE than the F-14). Again, see picture below:

It is more or less the same size as a Raptor, and slightly shorter in length than the proposed YF-23 Blackwidow. Thus, I do not know why people always claim it is 'too long' and 'not maneuverable,' when the fact is that it is smaller and more compact than the SU-30 (and the same size as the Raptor), and is one of the most maneuverable airframes out there.

BILL M: 'Compare the engine exhaust profiles for this one and the F22. BIG IR signature for this guy!'

True, in terms of IR signature the Raptor is MILES ahead of the PakFa prototype. Note four things however:

1) This is still the prototype version. There is definitely room for growth between now and the final version. For instance, look below at the differences between the YF-22 prototype and the final F-22.

2) The F-22 was created from the start to be the best darn fighter the world has ever seen. It had all-aspect stealth, among other goodies. This was because it was meant to be a 'deep-IADS penetrator,' able to penetrate the most advanced IADS (integrated air defence networks armed with the latest SAM systems) unscathed. To kick down the door in enemy territory. the only other manned deep-IADS penetrator is the B-2 bomber (the F-35 does not EVEN begin to get close to that). The PakFa however is meant to defend over HOME territory. Different purposes, thus different solutions.

3) Look at the F-35 JSF. It has the hottest burning most powerful single jet engine on the planet, with a nozzle that has to be one of the most unstealthy this side of a Vougth F-8 Crusader! One of the worst IR signatures flying ....yet ...silence.

4) The Russians have worked on stealthy nozzles before, thus the final version may have something. Again ...as usual ...here is the pudding to act as proof (a SU-30 with a nozzle concept that looks quite ...familiar ...)

Is the PakFa a Raptor killer? Nope, it is MOST definitely NOT. However, it is not the dog some try to make it seem, and will be better than 99% of the stuff flying out there that do not have 'Raptor' in their name brackets. 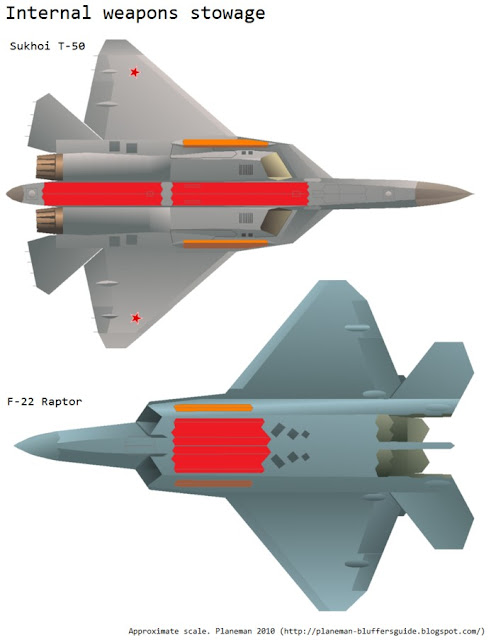 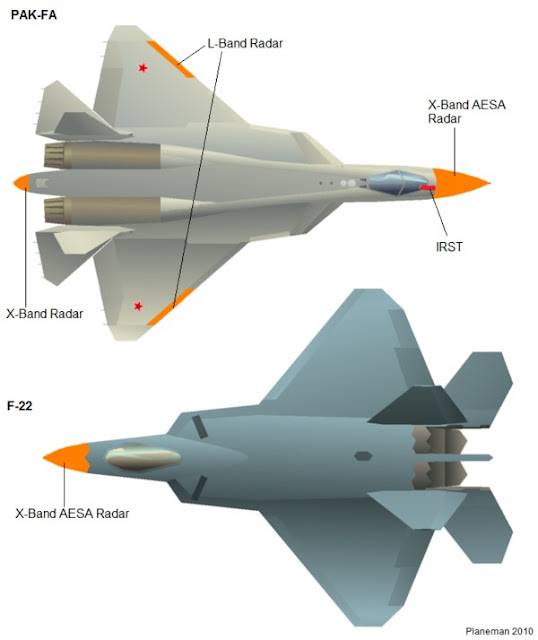 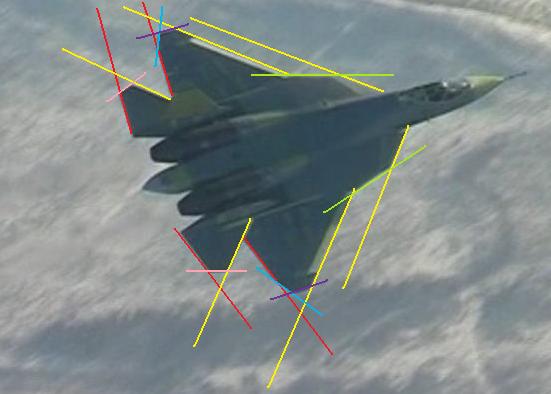 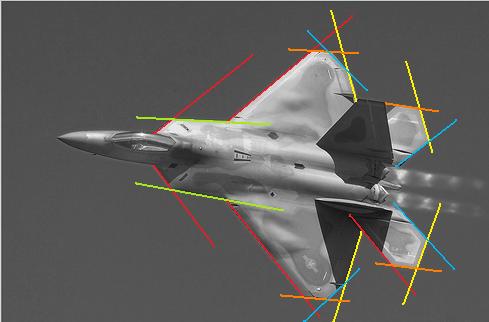 Great information. Thanks for re-posting!

A plane is only as good as the person flying it!

“The Pak Fa would not defeat a Raptor (the F-22 is truly a superlative machine) ...but it will knock out any J-11, J-10 or (future Low observable concept) JXX. With ease.
“ —> because, as you point out, Russia and India have no intention of getting into a shooting contest with the US —> they have no need to. Instead they have a common enemy — CHINA.

The input wasn’t mine. It was Spetznaz’s effort.