Why Are Twitter Employees So Afraid Of Free Speech? It’s About Market Saturation
Zubu Brothers ^ | 6-19-2022 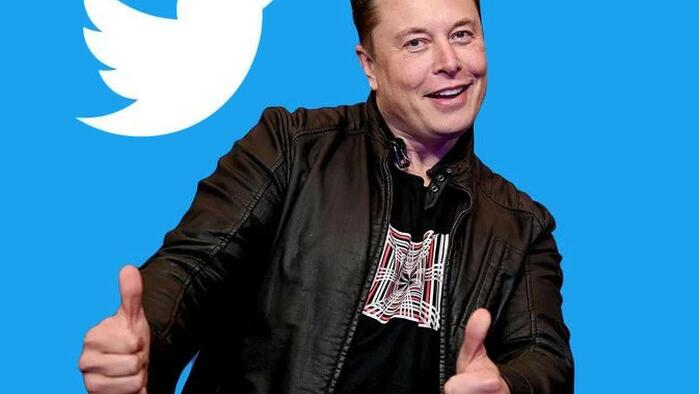 When a franchise sets out to compete with other companies that have a superior market or branding presence, they will sometimes exploit a strategy called “market saturation” in order to undermine their opponent’s visibility. An example of this is Starbucks, which sought to co-opt and then destroy the concept of the neighborhood hipster coffee shop by flooding every city and town with their own stores. After several years, there was at least four Starbucks within a mile of every other Starbucks store and often these franchises would sit right across the road from each other.

You might ask – What the hell does this have to do with Twitter? Well, remember this analogy for later because it’s important, but it has a lot to do with the manner in which the political left operates and how social justice warriors and trans activists take control of the narrative. And guess who has been running Twitter until recently? That’s right, extreme leftists based out of the social justice Mecca – San Francisco.

Twitter is supposedly one of the largest social media companies in the world (though this has come under question recently as it has yet to be determined how many users on the platform are actually fake), and basing this massive communications hub out of one of the most communistic/collectivist cities in the US already set the stage for unprecedented political bias. When your company is headquartered in such a place, the vast majority of people you hire will be part of the social justice hive mind. It’s saturated.

Why is this a problem? Leftists don’t believe in work, they believe in activism, and they even believe that their activism is so important to the world that they should be paid for it as if it is the same as work. This is not an exaggeration; they really are that crazy. That’s why when it became apparent that billionaire Elon Musk, a self described proponent of meritocracy, was going to take over the platform, the employees freaked out. Not because they thought they were going to lose their jobs (though that was a concern), but more so because they were horrified at the notion that Twitter as a communications platform would be “forced” by Musk to allow free speech. Meaning, Twitter employees have spent most of their careers trying to erase one side of the political discussion (conservatives), and the prospect of all that censorship disappearing has them frothing at the mouth like rabid dogs.

Though leftists often greatly overestimate their influence within the overall culture, they don’t really care so much about convincing the public of the legitimacy of their ideology. Rather, what they are obsessed with is their beliefs becoming the ONLY beliefs that are perpetuated in the mainstream. No other franchises can be allowed a foothold in media, in popular culture or on Big Tech platforms. They see the public as a blank canvas, a lump of clay that can and should be molded, and they think that if the public is bombarded daily with the social justice cult message then this will eventually translate to a manufactured majority that serves their interests.

A perfect example is the concept of “pride month.” Since when does 2%-3% of the global population need an entire month to celebrate their obscure sexual habits? Since when does almost every major corporation need to brand their products with pride propaganda during June? Because saturation works, to a point. In the US, where there has been a constant bombardment of LGBT propaganda in media, the number of people identifying as gay and trans rose from around 2.5% in 2008 to over 5% in 2016, and it’s still climbing today. Remember, the gay lobby has long argued that homosexuality is inborn. So, somehow, the rate of people born gay doubled in the span of 8 years, and only in the US and certain parts of Europe. How is this possible?

It’s not possible. Not statistically or scientifically. There was no stigma in 2008 in terms of identifying as gay; there wasn’t really any stigma as far back as the 1990’s. On top of that, survey methods are generally anonymous anyway. So stigma can’t be used as an excuse for the abnormality in stats. Furthermore, the rise in gay identification is almost entirely among Gen Z teens and young adults (an easily manipulated subsection of society). Again, there is no stigma in any age group today. In fact, it’s quite the opposite. The LGBT movement has become a political movement and a pop culture movement driven by corporate saturation. It is considered trendy among young people to be gay or trans, and so the percentage rises according to the trend.

Leftists have long understood a concept which most of their political opponents have not, and that is the power of cultural gatekeeping. They understand that by forcefully injecting their ideology into every aspect of a culture through key sources of entertainment and information distribution as well as public schools, they can create the illusion that they are the majority. And by creating the illusion of a majority, you can one day turn that illusion into a reality as millions of people start to assume that there is only one way to see the world – The leftist way.

In a recent meeting with Elon Musk to discuss the future of the company, Twitter employees were particularly grieved by the notion that the business would be run on meritocracy and that Musk argued in favor of people being able to say whatever they want within the bounds of the law (no death threats). Twitter is a platform that has been declining for years, but it is true that there is no alternative in existence yet with the same level of cultural reach. Employees have been enjoying an incredible level of power – the power to omit, to bury and to erase any messages, facts or people that contradict the greater hive mind. They see this as their job and the thing that brings meaning to their lives. Now, that power is about to be taken away.

Not surprisingly, many globalists also share the same sentiments as Twitter workers. Max Boot, a long time member of the Council on Foreign Relations, had this to say about the potential for free speech on Twitter: 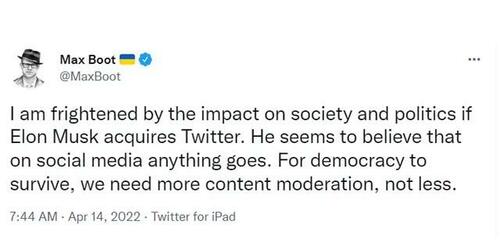 Note the level of hypocrisy: For “democracy” to survive, we need MORE censorship?

There is something very wrong with the existence of only a few major communications networks becoming integral to social and economic cohesion within a society. It’s not just about a handful of corporations working together to form a technically legal monopoly, it’s also about the ability of those companies to digitally shun entire groups from the wider discourse. As Big Tech platforms become more integrated into our financial life, those same companies could even block entire groups of people from economic access. They could literally starve people to death if they disagree with the collectivist narrative.

This is the power that leftists really want; the power to silence and to destroy all other ideals besides their own. And they get to that goal by first achieving market saturation.

On the bright side, companies like Starbucks got the saturation they wanted and it’s killing them. With so many franchises everywhere, they are now competing with each other and cannibalizing each other. You’ll find that this is also a common theme among leftist movements. With so many different professional victims battling over an ever shrinking piece of the pie, it’s only a matter of time before these people eat each other alive. Unfortunately, they may destroy our country well before our society gets a chance to wake up from the madness and rebalance the scales.

Because when people are free to openly challenge Marxism, it falls apart.

“Why Are Twitter Employees So Afraid Of Free Speech?”

Sheeple are terrified of all voices except their master’s voice.

Though leftists often greatly overestimate their influence within the overall culture, they don’t really care so much about convincing the public of the legitimacy of their ideology. Rather, what they are obsessed with is their beliefs becoming the ONLY beliefs that are perpetuated in the mainstream. No other franchises can be allowed a foothold in media, in popular culture or on Big Tech platforms. They see the public as a blank canvas, a lump of clay that can and should be molded, and they think that if the public is bombarded daily with the social justice cult message then this will eventually translate to a manufactured majority that serves their interests.

This is precisely the essence of Calvinism and Puritanism. No other thought other than what the consistory of clergy developed was permitted. The Puritans of Mass Bay Colony executed Quakers who insisted on returning to the sacred rock pile after being expelled. Anne Hutchison and Roger Williams took the hint and departed ‘the City on a Hill’,
(was Reagan really so clueless he didn’t know what that phrase really meant, or did he just think wtf it sounds good so go with it?)

As for Max Butt, they really must have some truly graphic pictures of him buttranging with little boys as well as having a scout troop full of guys on retainer to testify how Max showed them his butt.

5 posted on 06/19/2022 2:16:01 PM PDT by robowombat (Orth, all y)
[ Post Reply | Private Reply | To 1 | View Replies]
To: blam
As Big Tech platforms become more integrated into our financial life, those same companies could even block entire groups of people from economic access. They could literally starve people to death if they disagree with the collectivist narrative

This is exactly the power that Musk has in mind with his acquisition of Twitter. Perhaps not to the same ends as written here, but his plans are to integrate Twitter with individual's finances.
He told us just this yesterday.

You conflate Calvinism and Puritanism with what happened over 300 years ago in Massachusetts Bay Colony.
Your theory and claims are weak.

Puritanism degenerated into Unitarianism. The self righteous sanctimoniusness remained even as the belief in revealed religion evaporated. Puritanism is just another word for Calvinism with its belief in predestination and rule by the clerical elite. This attitude of perpetual virtue never went away. Today’s leftist believe just as strongly as the Mathers that only their beliefs should be allowed and all others represent evil. The deracinated Puritans absorbed the sanctimony of political marxism and spread it through both universities and churches in the 20th century. The woke people have absorbed this poison and carry on the tradition of sanctimony, self righteousness and belief in a now secular illuminated elite, Calvinism is one of the worst concepts ever launched. the world would be much off had Calvin never lived.

OT about the Quakers ... those martyrs were contemporaneous with my Quaker ancestors who got regular beat-downs from the authorities for daring to hold house church meetings. Things improved when the survivors moved south and joined the Friends communities in the Carolinas.

It’s not that they are against free speech, they have been programmed to believe any idea counter to theirs is considered hate speech.

Never understood why the Quakers got so much hell from rank and file colonials.