While Nancy Pelosi hopes to pass the so-called “Build Back Better” bill tonight in the House, some bad news came down the line from the CBO.

Previous commitments were made by some “moderate” Democrats to vote for the bill only if the budget score came back deficit-neutral. But the preliminary numbers are out, and it looks like the CBO has completely debunked the White House’s “it costs zero dollars” talking point.

At first, Democrats were cheering on social media after seeing the following post from the CBO.

CBO estimates that the funding for tax enforcement activities provided by H.R. 5376, the Build Back Better Act, would increase outlays by $80 billion and revenues by $207 billion, thus decreasing the deficit by $127 billion, through 2031. https://t.co/GrbShPusVK

That excitement came from a misreading of how the CBO is scoring this bill. Instead of giving one, succinct number, the CBO is taking it piece by piece. That was set up purposely by Democrats in hopes of muddying the waters.

What the CBO is actually announcing there is that the new tax enforcement provisions would supposedly produce a deficit savings of $207B. I would certainly hope that such enforcement wouldn’t cost more than it brings in (because if it did, that would make no sense at all), but that was not a score on the actual spending portions of the bill.

Here’s what that looks like laid out on an easy-to-read chart.

🚨BREAKING 🚨- CBO scores show Build Back Better would add $159 billion to the deficit, as written.

(interactions may change this modestly) 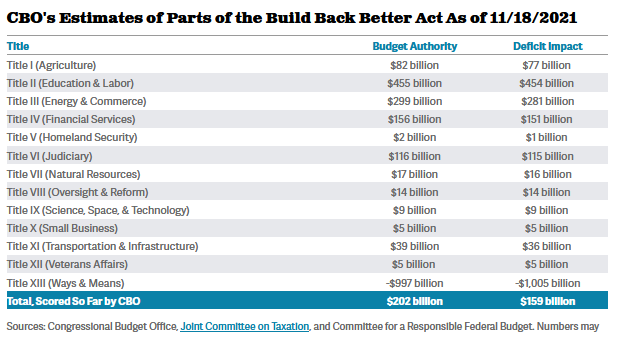 That deficit gap is apparently driven by the fact that the Biden administration way overestimated how much money their tax-enforcement mechanisms would bring in. As in, they overestimated new revenue by around 50%, and you can consider me skeptical that the CBO’s lower score is even legitimate given how many false promises we’ve been sold about “eliminating waste and fraud” with past spending bills

On that topic, if you want an idea of how little I trust the CBO, see one of my first articles on RedState where I took apart their gamesmanship on Obamacare.

CBO says IRS enforcement yields $207B, less than $400B from White House

Keep in mind, that $159 billion added to the deficit is after including in the increased revenue from new tax enforcement, and again, you should be highly skeptical that the government will magically find $207 billion after dumping more money into the IRS.

In other words, the Biden administration, Nancy Pelosi, and every other Democrat who ran out to claim this bill “costs zero dollars” lied. They were either being malicious or speaking out of total ignorance, not having the proper data to even make such a statement. This bill does not cost zero dollars. It adds to the deficit, and past the already high number, it could add even more to the deficit if the CBO’s pie in the sky estimation of new tax revenue doesn’t materialize.

BREAKING: The Congressional Budget Office projects “Build Back Broke” adds hundreds of billions to the deficit over a decade.

This sure feels like “lie of the year” material. Biden and his cohorts have been repeating this falsehood for months, snarking at reporters and trashing anyone who would dare to suggest that massive new social programs aren’t free. But those of us who insisted the sky was indeed blue were right in the end.

So where do the Democrats go from here? I’m guessing some tweaks are coming (likely to the SALT provisions) to fudge the numbers a bit more, but with Joe Manchin recently signaling he’s getting cold feet over inflation concerns, my money is on this not getting done before Christmas.

they never forecast properly though

so assuming that the expected revenues they use in their forecasting is always over-estimated, greatly

Doesn’t matter. They will “fix” it.

The CBO numbers understate by orders of magnitude the true costs. The Dems set the parameters of the estimate thereby cooking the books. The WSJ has an article citing the Wharton School’s estimate, which is $4.6 trillion unfunded.

**DO NOT forget that the CBO and JCT MUST thoroughly and comprehensively investigate and model up Exactly what this thing IS going to cost IF it passes! Just look what the CBO must do with a relatively miniscule health care proposal bill: 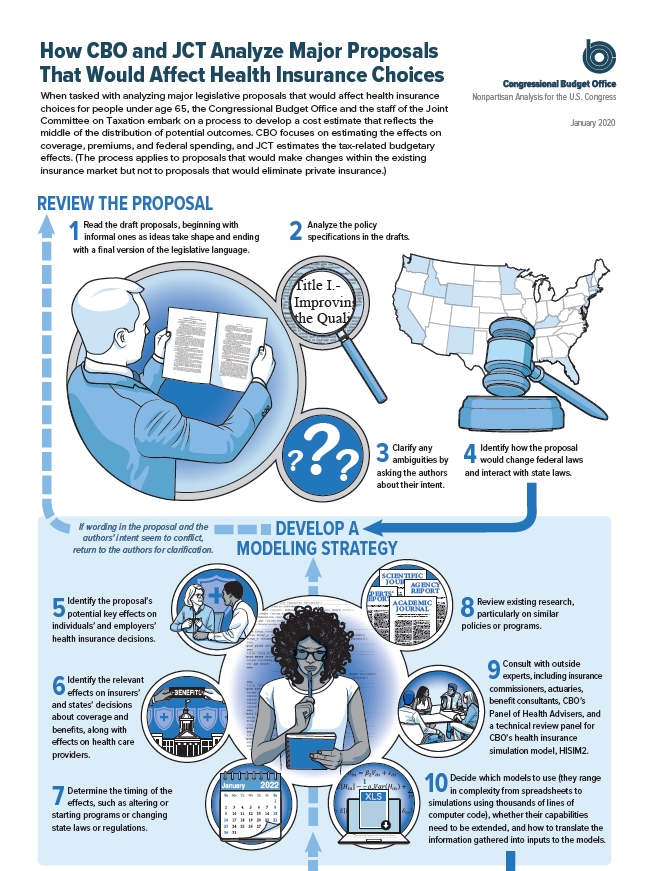 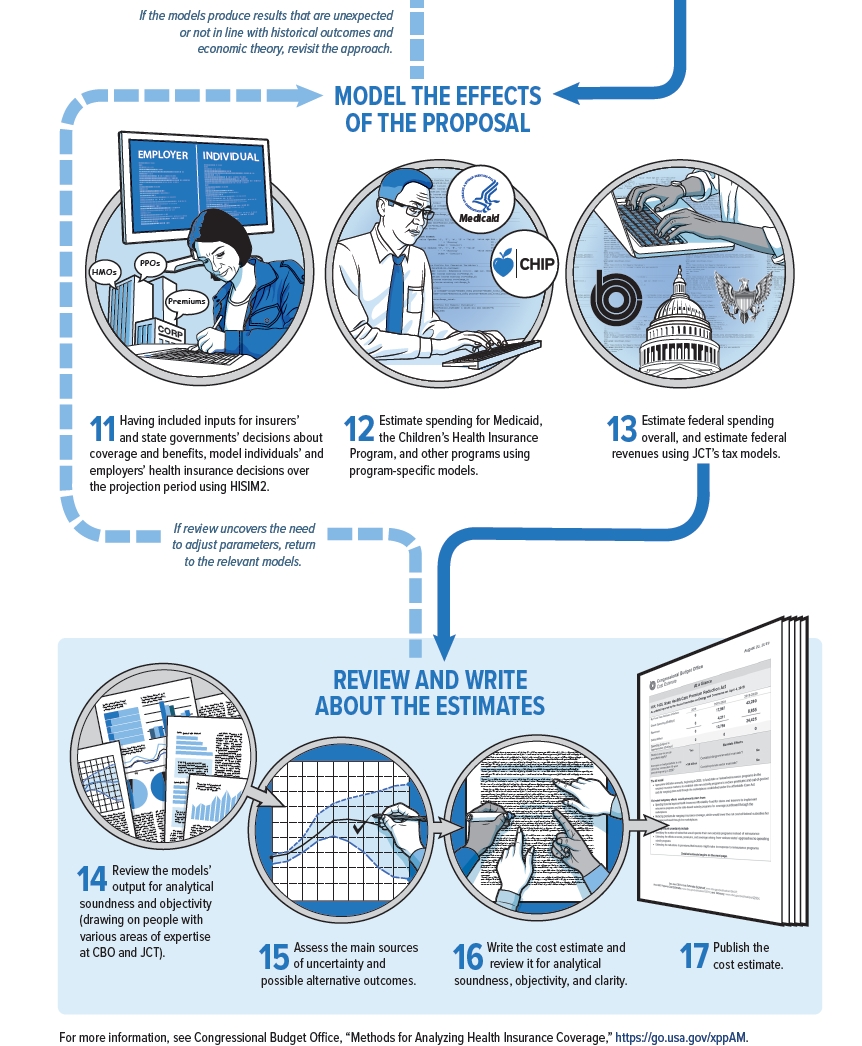 One of the first things a republican congress should do is put an end to the games that the CBO has to play by. The affordable care act was “scored” according to a formula where four years of taxes would be collected before the program would start outlays, so it was compelled to say there were ten years of taxes collected, but only six years of expenses incurred. That should have been illegal, but it was not only legal, it was deemed as appropriate by truly awful people who think the people who elect then are idiots... and since many of them keep getting reelected, maybe they have a point.

What kind of vote does this bill need to pass?

If I’m not mistaken the CBO comes up with their scores based on the information provided to them by whoever submits it. And, in the past, the information given to the CBO has been done in a way to make these bills be akin to rainbows, unicorns and lollipops. And, as usual we all find out that they’re train wrecks.

If the Dem’s provided this info and it’s already bad, it is going to be catastrophic.

And lets not forget about the amnesty that is written into the bill. That alone destroys this country, once and for all. We will be a combination of Central and South America, with millions more on the way.

Thank you Kemp, Ducey and all the rest.

We all knew the House and Senate numbers were cooked because that is what the left does...lie and then lie some more. All part of the Democrat risky scheme to fundamentally change America into a third world ****hole and clone of communist China, and they are following it to the letter. I read an article over at TheFederalist about that, “LEAKED: Teachers Reveal How They ‘Stalk’ Kids, Sideline Parents To Pull Middle Schoolers Into LGBT Groups”, so give that a look. Communists don’t do anything by accident and they are not stupid, they are insidious and play a great long game. And nobody sane every believed you can spend money over and above your income and balance to zero.

Trillion is a real number, and it’s money we do not have still being printed and spent as if we have it. Try that in real life and watch how quickly you are stopped by ‘authorities’.

Instead of giving one, succinct number, the CBO is taking it piece by piece. That was set up purposely by Democrats in hopes of muddying the waters.

I thought it was more of a case of the Democrats completely ignoring this Democrat Party CBO institutionalized by aunti Jimmah Caaaartah.

A number of programs are in the bill as lasting only several years, but everyone knows they won’t actually ever go away. So the cost is scored as three or four years, not ten.

This is what happened a few years ago with Obama”s “stimulus” bill. It just became part of the new baseline, and was stewarded through by RINOs in those omnibus, last minute, nobody read them bills year after year.

They will vote to pass no matter what the CBO is asked to say.