I would like to stop talking about COVID-19, but the establishment is doing its best to make it impossible to just go about enjoying the summer.

Summer: it can only be enjoyed for a brief time

With the constant ginning up of purportedly “scientific” studies along with the constant hawking of attendant bad science and the repression of information about effective treatments for “the deadly virus”  they’ve managed to keep the majority of the populace in thrall by continually promising more “freedom” mañana for compliance today. There seems to be no dearth of lost souls willing to do so.

As of late though there is – finally -  a growing backlash. As a few more porch lights start going on perhaps there will be a growing swarm of individuals who have grown sick and tired of the crap they’re being fed round the clock. I remain encouraged by the eye-opening of some influential leftists: Andrew Sullivan, Glenn Greenwald and Matt Taibbi - who penned this article for the New York Post: From ‘Yes we can’ to ‘No, you moron’: Dems have selves to blame for vaccine hesitancy.

I’m vaccinated. I think people should be vaccinated. But this latest moral mania — and make no mistake about it, the “pandemic of the unvaccinated” p.r. campaign is the latest in a ceaseless series of such manias, dating back to late 2016 — lays bare everything that’s abhorrent and nonsensical in modern American politics, beginning with the no-longer-disguised aristocratic mien of the Washington consensus.

Now this new vaccine debate has been amped to 11. The universal consensus of the “Powerhouse Roundtable” types is that it’s time to start opening the cans of whoop-ass on the vaccine-hesitant, yanking services and civil liberties from those murderous holdouts who are, the president tells us, “killing people.” They do this acting like the public doesn’t remember the messaging from the Biden-Harris campaign last year, which was talked about at the time as being irresponsible precisely because it set a precedent of urging the public to distrust the vaccine.

The article describes how the elite first establish state-sponsored dependence and then use that dependence to cudgel you into doing what they want you to do. From Margaret Hoover we hear this:

And from Obama henchman Rahm Emanuel we get this “amen, sister:”

“You know, I’m having an out-of-body experience, because I agree with you,” said Barack Obama’s former hatchet man [Rahm Emanuel], before adding, over the chyron, FRUSTRATION MOUNTS WITH UNVACCINATED AMERICANS:

“I would close the space in. Meaning if you want to participate in X or Y activity, you gotta show you’re vaccinated. So it becomes a reward-punishment-type system, and you make your own calculation.”

And that my friends is a classic example of what tyranny is, how tyrants think, and how they make their tyranny work.

My advice: if you find yourself in an awkward situation do not just lie down and go to sleep because it will only be worse when you wake up.

Sadly bad policy and confusion is the result when entities such as the CDC and NIH become hopelessly politicized. Competent scientists are under the thumb of Biden’s commissars. The people lose confidence in the competence, honesty and intent of these once sterling organizations

At least Jim Jones’s followers were allowed to decide for themselves if they wanted to drink the Kool-Aid. Or were they? 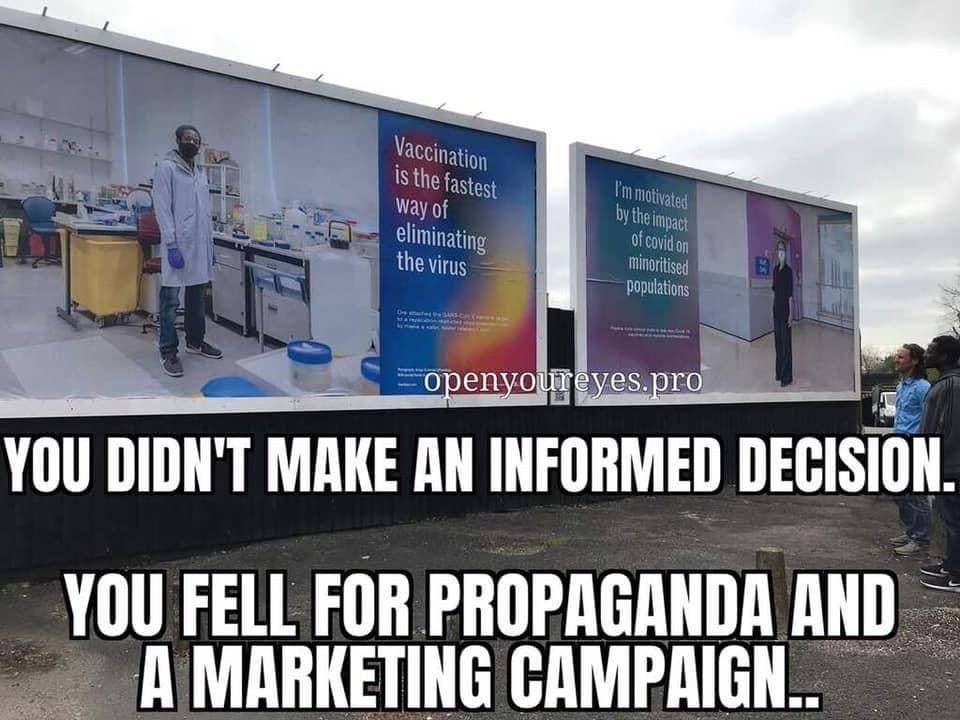 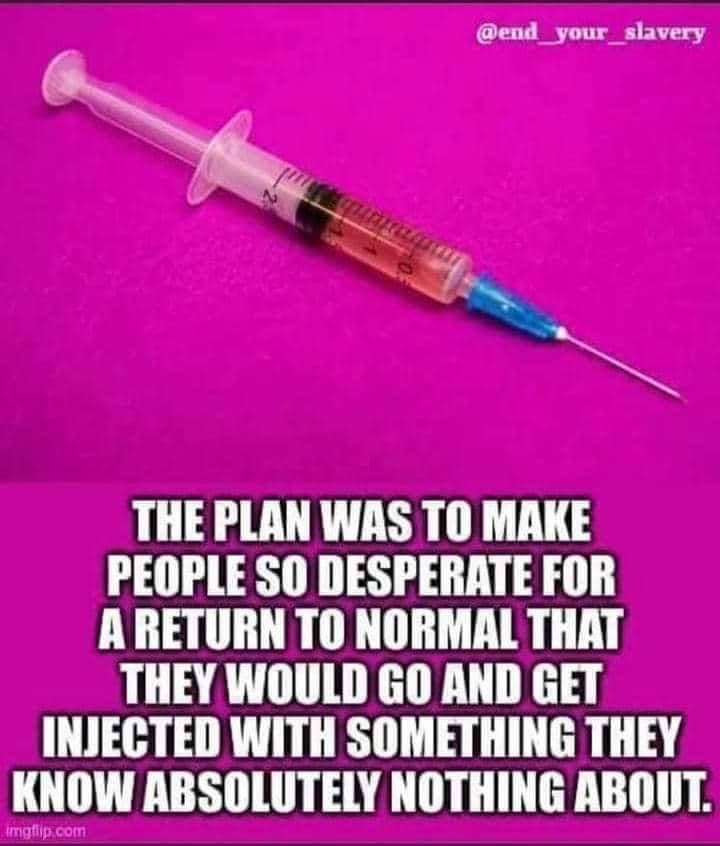 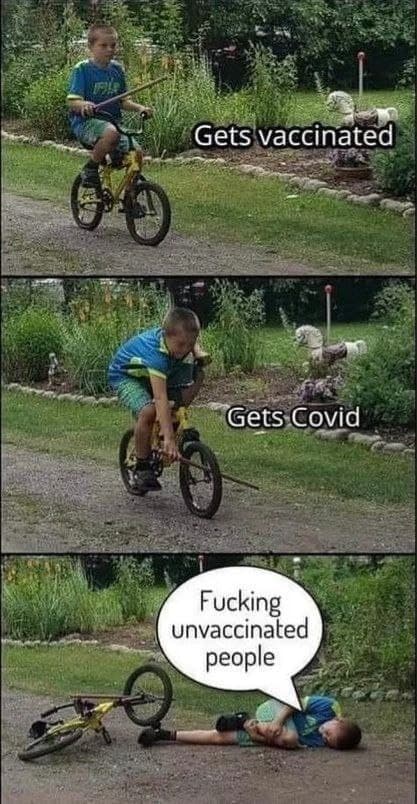 This is a global problem with the authors of the narrative far removed from the milieu that is humanity. It seems that the only people fighting the narrative are retired and independent scientists. The rest have to cough up the science they are paid for. The mainstream media gets most of its ad dollars from Pharma. Politicians everywhere work for the highest bidder. This stops when most of us say enough. The vaccine hesitant should be joined by the vaccine regret and call out sick—a National day of Sick and Tired of the lies. Drive with lights on. We need a bunch of the counter narrative crowd to declare a day of solidarity. We need to know there are more if us and assert that so we see our strength in numbers. Every employee being told to vaccinate against their will—including me—needs to call them out by calling out. How to get the word out and choose a date.

The rulers keep the subjects unhappy and miserable, promising them a little salvation now and then, if only they do what they are told.
But relief never comes. There is no Paradise for the folks. There is only continued misery and subjugation.

The State is NOT your savior. It will take your money and give it to someone it likes better than you. It will keep you in fear of the law, the concocted “enemy,” the virus, whatever serves the purpose of keeping you submissive and malleable.

That’s a name/person I haven’t seen in ages. Who dug her up?

So many doctors and medical research experts were out there from the beginning talking about the PREVENTATIVES... Vit. D, Zinc, Vit. C, Magnesium....

AND CURES that have been available from day one. Ivermectin, Remdesivir, Hydroxychloroquine.....

And the MSM and social media networks covered up the truth about them!

I was one of the ones who got multiple 30 day Facebook jail terms for reporting on the good effects!

HOW MANY HUNDREDS OF THOUSANDS OF LIVES LOST BECAUSE OF THEIR LIES??

8 posted on 07/31/2021 7:23:29 AM PDT by high info voter
[ Post Reply | Private Reply | To 1 | View Replies]
To: allendale
The people lose confidence in the competence, honesty and intent of these once sterling organizations

These organizations have never been "sterling," but you do you.

For a narrative of why this is not a vaccine, the gain of function crowd’s stated objective, and medical facts about masks and social distancing, described as informative and “likely the most unvarnished truth that gets posted to these threads,” see reply 9 on this FR post.

I was told this would all end the day after the election.