Lately, I have found myself turning to the Book of Revelations, written by the Apostle John and transmitted to the world in the first century A.D. Everyone is familiar with the vision of the four horsemen in Rev. 6:1-8, where they appear with the opening of the first four of the seven seals that bring forth the cataclysm of the end times.

The first horseman, armed with a bow and crown, rides a white horse, which scholars sometimes interpret to symbolize Christ (which seems rather bizarre). The second horseman rides a red horse and wields “a great sword…to take peace from the earth.” The third rides a black horse and carries a “pair of balances,” apparently heralding famine but equally likely, as it seems to me, justice. The fourth horseman rides a pale horse and is identified as Death, “and Hell followed with him.”

Chapters 17 and 18, dealing with the rise and fall of Babylon, are equally fascinating. The Babylon of chapter 17 is generally interpreted as a religious domain and that of chapter 18 as a politico-economic power, but the two are one, representing the might of the Roman Empire. Elaine Pagels writes in Revelations: Visions, Prophecy and Politics in the Book of Revelation, “it’s impossible to understand the general meaning and purpose of Revelation’s message without considering the time and setting in which it was given. The Apostle John’s prophetic message was delivered to seven churches in Asia Minor. While each church had its specific challenges, the most worrying threat was growing persecution from the Roman Empire. The new Christ-followers were under pressure to bow to the emperor-cult and to engage in idolatrous and immoral practices.” 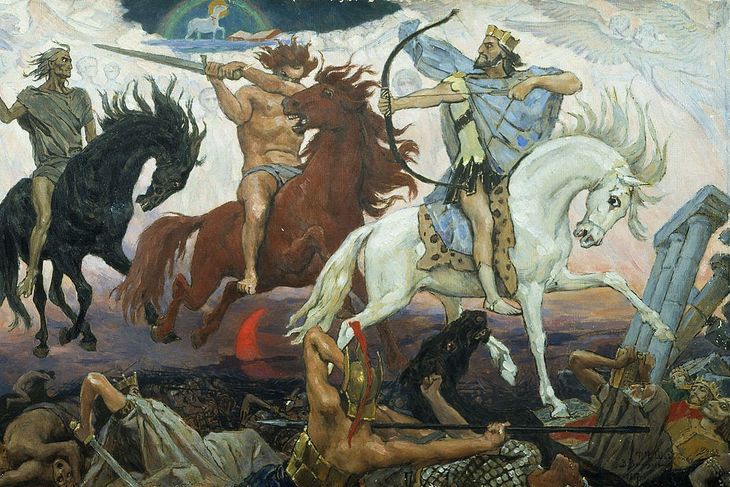 In our “time and setting,” one might think that we are witnessing the last days of the American Republic, following massive electoral fraud, the suppression of facts by the media, the ubiquitous practice of censorship by the tech platforms, and the (so far) pusillanimous refusal of the courts to rectify the greatest electoral scandal, by several orders of magnitude, since the defeat of Andrew Jackson in the “corrupt bargain” of 1824.

Given the cultural forces that have been at work undermining the joists and beams of the nation, the impending calamity comes as no surprise. The four horsemen are riding again, and their names are Feminism, Climate, COVID-19, and the Democratic Party.

With the Democratic Party riding the pale horse.

I stopped there. Book of Revelation

There is no book of Revelations in the Bible, any more than there is an Act of the Apostles. If someone doesn’t even know the title of the book, he probably doesn’t know much about what is in it.

The Democratic Party is but a tool both the Socialists and the Communists.
Funny how you did not name them.

The white horses rider is the antichrist. He is wearing a victors crown (stephanos), not a diadem.

I believe the red, black and pale horses represent the sword, famine and pestilence. Three things the OT frequently refers to as being used by God to inflict his wrath.

Perhaps. But did you know that "Everyone is familiar with the vision of the four horsemen in Rev. 6:1-8"...?