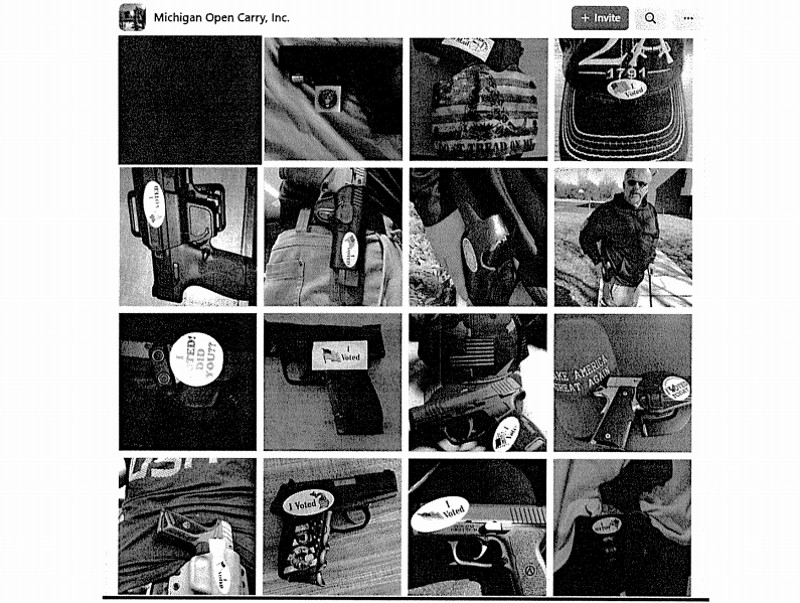 On 27 October, 2020,  Judge Christopher Murray, at the  Michigan Court of Claims, issued an opinion striking down Secretary of State Jocelyn Benson's edict banning the open carry of guns at all polling places on election day. The edict was issued on 16 October.  Tom Lambert and several right to bear arms groups sued to stop the order extral-legal order on 22 October, 2020. From freep.com:

"The court’s duty is not to act as an overseer of the Department of State, nor is it to impose its view on the wisdom of openly carrying firearms at polling places or other election locations," he said. "More importantly, its constitutional role is properly limited to only declaring what the law is, not what it should be."

Murray handed down his ruling the same day the Detroit branch of the NAACP said its members and area attorneys will monitor polls across the city and state on Election Day and will report to police and prosecutors any instances of voter intimidation or voter suppression, including voters feeling threatened by gun-carrying individuals “watching” the polls.

Radical leftist Secretary of State Jocelyn Benson, and elected in the anti-Trump wave in 2018,  and Attorney General Dana Nessel, issued statements saying they will appeal the decision.

Groups pushing for citizen disarmament have been trying to  define open carry as illegitimate for decades. During the last three decades, organized open carry groups and civic minded open carry individuals have been demonstrating exactly the opposite.

Open carry demonstrations have been some of the most peaceful and law abiding, in spite of predictions of violence.

For the last hundred years, the ability of officials to issue law by dictat has been part of the power grab by Progressives, in their mostly successful attempt to move legislative power from the legislatures to administrative agencies. Requiring specific rule making procedures has been one method used to restrict the abuse of the authority.


In this case, there is a direct conflict because of the separation of powers between the executive branch and the legislative branch. Republican Speaker of the House, Lee Chatfield applauded the Judge Murray's decision. From tribuneledgernews.com:

“Time after time the courts have struck down this administration when it overreaches,” Chatfield wrote on Twitter. “Firearms. Line 5. Redistricting. Vaping. Emergency powers. Nobody is above the law. It can’t be sidestepped. We have a democratic process. It needs to be followed.”

In his decision, Murray noted that the Democratic secretary of state’s prohibition on the open carry of firearms at polling places appeared to be more than an interpretation of existing statute. It was a rule that should be subjected to the rule-making process, he wrote.

The judicial branch (the court) has ruled the Secretary of State overstepped her authority.  The Attorney General, Dana Nessel and Benson are appealing the decision to the Michigan Court of Appeals.


It is unknown if the appeal will be heard before the election, which is scheduled one week from the date the appeal was made.

©2020 by Dean Weingarten: Permission to share is granted when this notice and link are included.

Was this “ban on open carry” at the polls for a reason? Like intimidation is easier when unarmed?

It’s nice to see these petty tyrants being rebuked and reprimanded.

She is attempting to bolster the meme that open carry *is* intimidation.

If that is considered legally correct, then open carry can be banned.

Open carry has been legal, including at the polls in Michigan, as long as Michigan has existed.

It might be moot depending on where the polls are located.

7 posted on 10/30/2020 7:15:49 AM PDT by Clutch Martin (The trouble ain't that there is too many fools, but that the lightning ain't distributed right.)
[ Post Reply | Private Reply | To 4 | View Replies]
To: Lazamataz
During the Colonial period, I think there were some colonies with requirements that people show up with arms at the polls.

Of course, during modern times, the price of a decent pistol has become so low, that it may be less than what Michael Bloomberg spent per each vote he got in the primaries...

This is offset by the lack of manufacturing capacity.

At the current rate of manufacture, it will take us a few years to make enough pistols for voters who do not now have them.