Last night’s debate was certainly not as difficult to watch as the first one. Still, I’m awarding the win to Joey B’s official resuscitation team, seen here celebrating after successfully reviving the former Vice President from his Zombie-like state: 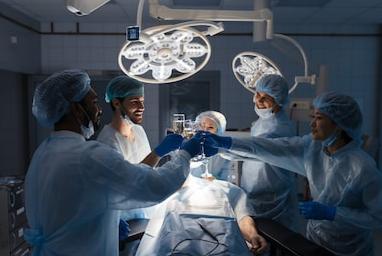 Their job was to get the patient on his feet, walking, talking and acting like he used to. The neurological team didn’t have much to work with so we got the reanimated Joe talking just like the original good old Joe. Thus we get classical gaffes like his contention that  “we had a good relationship with Hitler before he invaded Europe” (for the record, uh, no). And his trademark “I’ll have things both way” tactic on fracking – he was against it before he was for it – culminating in his nod to AOC’s  Green New Deal assertion that he’ll eliminate the fossil fuel industry altogether.

As for President Trump, his patience with the moderator’s immoderate questions and interruptions along with his opponent’s lies about everything from the Obama-Biden administration record to the Russian disinformation excuse for Hunter’s laptop is reason enough to reelect him.

And it’s the Democrats who want to keep the economy shutdown and you in lockdown indefinitely due to the CHINESE virus.

Why on earth is this man not 50 points ahead?

“You're the one that takes all the money from Wall Street. I don't take it.”

“I don't make money from China, you do.”

“I don't make money from Russia. You made three and a half million dollars.”

I love this man so much, so help me God, that if he got sick and needed a heart transplant, I would give him mine.

Well. Maybe not my “heart”. I’d give him a kidney.

Never in my lifetime have I ever heard crowds shout “we love you” to a president. And they mean it. Trump has a bond with the people like no other.

Hunter is the bag man, not Joe.

Pay Hunter and Joe will naturally fall in line.

“Yeah, your family selling you to the highest bidder, we’ve seen Hunter’s e-mails.”

In my suburban area, we have volunteer firefighters that get paid meal allowances. The unit was formed in 1951 so homeowners could get lower insurance premiums.

My neighbor across the street is degreed full-time firefighter. I don’t know what he makes, but I’m sure it is more than $15 per hour. He was able to get his paid job easily.

In NYC, the retired firefighters often get pensions over $100,000/year.

New Orleans paid its police poorly prior to Katrina, but still more than the minimum wage.

“””New Orleans paid its police poorly prior to Katrina, but still more than the minimum wage.””””””””””

Yeah, but they got free Cadillacs when they bailed out during Katrina.

Right now he needs your vote. Later you can donate whatever you want.

Trump did an impressive job during the debate against Biden, who I believe went to law school.

The fire chief in our area is a guy I went to high school with. He retired last year with a very comfortable middle class lifestyle. This is out in the sticks. Biden just lies.

Please stop the ra ra for our team. Our beloved RINOs are globalist traitors too.

The NHS had a capitalized “Trust” structure for decades. Each area had its own “Trust”.

These trusts were structually very similar in scope to say Inova in Northern Virginia and Partners in the Boston area. It would be very easy to create an NHS copy in the US.

The British equivalents to Mayo Brothers and the Cleveland Clinic were made their own NHS trusts.

He did at Syracuse University.

And the big questions there are (from people we know who attended at the same time he did and knew him):

How did he get in?

How did he get out (graduate)?

And who wrote his papers and took his tests for him?

IOW, he was not know for his intellectual acumen.

Biden’s Law School Ranking Not as He Said

He graduated in the bottom 10% at Syracuse.

That can be true. Many departments, especially small rural ones, are mostly, if not all, a volunteer force. You might get a mileage or meal allowance, but your pay is $0 per hour.

Also, I'm in the Guard, and we got called up for the tropical storm. If you include us as first responders, we get $130 a day on State Active Duty. Working a 20hr or 22hr day is definitely less than minimum wage!

Other than lying, Joe Biden began to meltdown about halfway through the debate.

Joe Biden Pointed to Trump and Says, “Abraham Lincoln Here is One of the Most Racist Presidents We’ve Had in Modern History”. LOL.