I mean, they want them to all come to live here and vote and stuff, so why all the hate and vitriol towards Melania (who is a legal citizen, by the way) just because she re-did the Rose Garden?

The left has turned into a pack of rabid wolves over Melania’s changes in the Rose Garden – changes she made so that it could be more “handicap” accessible and people could see better…But forget all that, the mentally ill left has lost every last bit of soul and humanity and they literally froth at the mouth the moment any “Trump” does or says anything.

This is a disease. Normal people don’t behave this way.

Also, they once again show their true and hateful colors in the process, by lashing out at Melania, attacking her as a “classless illegal immigrant.” Let’s kick things off with “Repubclian” (LOL) Ana Navarro. Now, when you read this, please remember that the trees were not uprooted and tossed through a wood-chipper. They were moved elsewhere.

“This woman. In March, as Pandemic began, it was a tennis pavilion. Now, as +175,000 -and climbing- American lives and millions of livelihoods have been lost, she unveils new & NOT improved Rose Garden. She cut down Jackie’s trees! I hope @DrBiden returns it to the way it was.” The actress from “Parent Trap” Lisa Ann Walter also chimed in, calling Melania a “classless illegal immigrant” and an “escort.”

“My outrage is that there’s a classless, illegal immigrant, former escort masquerading as a first lady. Our country deserves better. Quit telling anyone what they think Former Newsweek and New York Times reporter Kurt Eichenwald went on a tirade over Melania being a foreigner – and how dare she wreck “OUR HISTORY.”

“It is a destruction of our history, something no other First Lady would have had the gall to do. This is the first time I have been furious that @FLOTUS is a foreigner. She has no right to wreck our history.”

It is a destruction of our history, something no other First Lady would have had the gall to do. This is the first time I have been furious that @FLOTUS is a foreigner. She has no right to wreck our history. https://t.co/9a4caQhmTV

Kurt also said this stuff, but then deleted all of it because so many people called him a bigot.

The left has just lost their marbles at this point.

I will tell you this much, election night will be hard on all of us, I know I’ll be nervous, but when all is said and done, these crazy liberals are all going to need about 6 months in a hug-me-jacket and a padded room to recover from yet another loss, because they just don’t realize that they truly are everything ugly and hateful that they claim Trump (and we) are.

It’s sad. I guess all we can do is pray for these Godless monsters.

TOPICS: Politics; Society
KEYWORDS: ananavarro; bigotry; cancelculture; eichenwald; kurteichenwald; libhypocrites; lisaannwalter; melaniatrump; rosegarden Navigation: use the links below to view more comments.
first 1-20, 21 next last
Bat💩 crazy tweets at link. Liberals are EXACTLY what they hate. And they've become so deranged they don't care that they're exposing themselves for the flaming hypocrites they are. White BLM/ANQUEEFAS hurl n-words at Black people who call them out on their crap, so these a-holes calling Melania an illegal immigrant as an ethnic slur should come as no surprise.
1 posted on 08/23/2020 8:54:52 PM PDT by Impala64ssa
[ Post Reply | Private Reply | View Replies]
To: Impala64ssa

I don’t even know what it looked like before.

...And was that the garden that Michelle tore up to grow a bushel of vegetables?

Deranged Marxists, liars, divorced from reality. They are deluded that all people can be deluded by telling them the opposite of the truth.

Yep, pure bat shit crazy. They will find something to hate about everything Trump does. I wonder what they will hate about Trump signing the EO lowering drug prices.

I don’t think most great straight guys would act like this.

The true ugliness that these soulless beings are is becoming more and more exposed the closer we get to November 3rd.
When the election results are in and Donald Trump is reelected the meltdown/howling at the moon we witnessed after the last election will be tame by comparison.
I believe that will push them all to a point of no return.

They’ve lost their minds. I see them passing around a Bush 43 photo, claiming it was the Obama garden or implying it was the garden before the renovation.

“It is a destruction of our history, something no other First Lady would have had the gall to do. This is the first time I have been furious that @FLOTUS is a foreigner. She has no right to wreck our history.”

Yeh, only BLM can can wreck, burn, destroy our history.

I would love Pres Trump to advocate using oxygen. Then the crazies will declare oxygen as racist and stage breathing strikes.

It became necessary to reconfigure the Rose Garden after Obozo couldn’t decide where best to bury the PRESIDENTIAL MAGIC WAND during the first month of his INFESTATION of the WH.
He did such an exceptional job that it took President Trump 2 weeks and a backhoe to find and put it to use.

That is very old news. We are facing pure evil.

Calling Melania Trump ‘an escort’ is worse. We all know what that means

The actress from “Parent Trap” Lisa Ann Walter also chimed in, calling Melania a “classless illegal immigrant” and an “escort.”

They never opine on the terrorists, rioters and Antifa/BLM, but save all of the vitriol for the Trump family.

The ‘bushel’ of tomatoes that grew up and ripened magically in a very short time under Michelle’s tutelage???

Those tomatoes that sere delivered to the White House in a produce truck???

Roses need full sun to grow. Too many trees had begun to shade the garden. Melanie restored it back to a “ROSE” garden and it looks classic and elegant now. 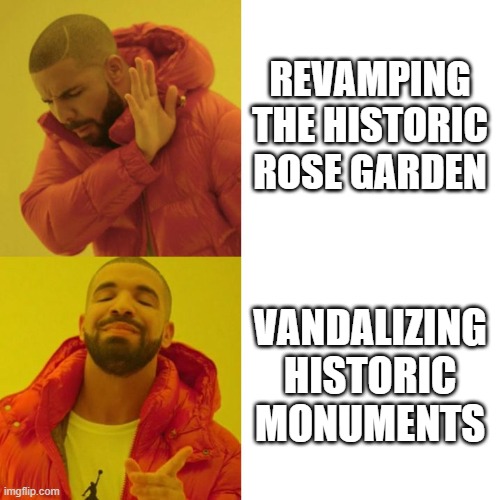