Question: in addition to her duties as an NBC correspondent, is Heidi Przybyla working overtime as a PR flack for the Biden campaign? You have to wonder after watching Przybyla's performance on today's Morning Joe.

Przybyla didn't merely highlight the memo that the Biden campaign has put out as a pre-emptive response to charges of Ukraine corruption. She personally—and passionately—embraced the memo's findings. 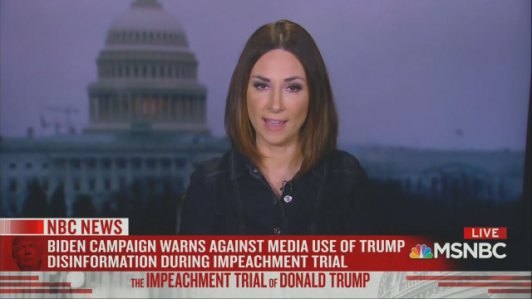 Not an exaggeration. This NBC “correspondent” literally sounds like a Biden PR flack.

Reminds me of a sign from back in the Minnesota Twins heyday. Hey Hrbek.....buy a vowel.

I have the MRC book “And That’s The Way It Isn’t” in my personal library. Published in the early 1990s, it has one part that documents many well known names from the news media from back then (many of whom are still around) and their connections with particularly the Democrats (jobs, family, etc).

Her name is pronounced “chi-bu-la.” I think it means shepherd.

Yee...let’s all chip in and send some makeup.

The PROPAGANDA arm of the CRIMINAL STATE is very powerful. The pictures are very compelling. The players are very nuanced/polished/prepped. The chances of rebuttal are nil...unless you are on a political facebook sight like FR...and your voice amplification is microscopic in comparison.

I wonder if she’s always drunk that early in the a.m. Where on earth did she come from? I don’t watch any of the MSM but I’ve never heard of her - thank goodness, I escaped that. She’s unbearable to listen to. She’s not even a good news reader! Maybe Joe and Mika are drunk also so she sounded perfectly sober to them.

I wonder if this person knows there are such devices as videos today and I’m sure if she wanted, she could find plenty of “evidence” to support anything the Republicans want to bring up about Biden.

“”it is a reminder to all of us that the accusations at the heart of the president’s defense here, that it was merit, that they had merit to investigate Joe Biden has any credibility to it.””

“”And I want just want to read you one quote that I think is powerful from this memo. It says — to the media, a reminder. It is not sufficient to say the allegations are unsubstantiated or that evidence, no evidence that emerged to support them. Not only is there no evidence for Republicans main argument against vice-president, against the Vice-President, there is a mountain of evidence that actively debunks it and it is malpractice to ignore that truth””

“She’s not even a good news reader!”

Agreed: more than once in the clip, she’s unable to complete a cogent, grammatical sentence.

“”Heidi Przybyla was born on 18th November 1973, in Alexandria, Virginia, United States. She spent most of her early days growing up in her hometown Alexandria along with his parents. She is of White-American ethnicity and belongs to American nationality. The information about her parents and siblings are hidden from the media.””

She’s not the only one who’s drunk or confused. Notice the incorrect and/or correct “pronoun” and what WHITE AMERICAN ethnicity is, I don’t have a clue or American nationality..must be written by a foreigner!

Me thinks thou doth protest too much!! If there is no evidence then WHAT can come out? If the evidence has been debunked as fake, then let it out. If they are innocent, they have nothing to hide and transparency is the rule of the day. There are no privileges to protect with Joe and Family. And if their are, then let him assert them and lets let the courts decide. Otherwise, fair game!!

A fraud of a “reporter”.