What will European culture look like after the Islamic takeover?
Freep | 11/22/19 | Charles Oconnell

Here is a modern, electric Indian musical instrument which the vast majority of people have never heard of, named, to us, with a rather poor description of the mechanical construction, the sound and the music played on it, a "button banjo", more properly, a Bulbul Tarang. 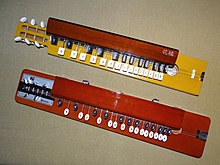 It was so named "banjo" or "benjo" by a culture that had little substantial contact with either an American banjo or Turkish jimbush, (the latter with a skin-covered, metallic pot for resonator, rather than wooden hoop). You have to see and hear the button banjo to understand it. Banjo Bulbultarang Swarashree Kishor Nandoskar.

Bulbul Tarang performance occupies a cultural use place rather like an Indian harmonium; it will be accompanied by tablas, there is the implication of accompaniment by the tambura, fretless drone lute. The music we can hear in circulation is "middlebrow", or perhaps to say, progressive popular, somewhat like low intensity Bollywood music but separate from cinema, infused throughout regular, personal popular culture, though there is much less than our normal expectation of separation of "middlebrow" from "highbrow" music in Indian culture.

Another largely unknown type of instrument is a Turkish, fretless extension of a classical guitar, Perdesiz Gitar.

This context, north-western European Muslim culture, can support speculation, what will post-Christian European culture look like? The shocking implications of French writer Michel Houellebecq's Submission novel are very difficult for us to envision at a detail level. Look at some of the more well-known Turkish perdesiz gitar stars (the players cited above are rather obscure, hard to find, but they show the high level of culture and musicianship of rather ordinary amateurs practicing this genre).

A subordinate issue, is to consider how dedicated Christians who resist both secularization and Islamicization will survive at a time when Islamicists come out from under cover and destroy the secularist culture they are presently infecting like a virus.

A little known legal accommodation for religious minorities was prevalent in the Ottoman Empire prior to the close of WWI, Millet law, independent courts of law pertaining to "personal law" under which confessional communities (groups abiding by the laws of Muslim Sharia, Christian Canon law, or Jewish Halakha) were allowed to rule themselves under their own laws. (It is unknown to me, how Sharia law would have operated separately from majority Muslim judicial administration in the "Musulman" region.)

Sharia law during the current prelude to Islamic takeover, in England, France and presumably in Teutonic cultural areas, would seem to us a kind of inversion of this principle, the Muslims temporarily occupying the minority position. Whereas Sharia seems to us to have an aggressive character, minority millet law administration is much more accommodating with the majority, Islamic juridical authority, not presuming to take independent political decisions outside their ghettoized communities. An analogue in our recent past, was Keltic Breton law operating locally in Ireland under British occupation. Cases of homicide would not be addressed by severe personal punishment of the perpetrator, rather, each member of the perpetrator's clan would be assessed a fine, payable to the victim's family. This type of ruling was regarded highly dubiously by the dominant British Common Law tradition.

98% of Anatolians have a Greek ethnic inheritance.

But with less dogs.

I guess it’s better than if the Chinese took over and we had to listen to their operas.

If the Chines takeover we learn to like eating dogs. :)

“What will European culture look like after the Islamic takeover?”

agree... screw europe. if they want to commit suicide, have at it...

It will look like Afghanistan and there will be secular infighting and Christians caught in the middle being killed often..

Sharia Law and all the old architecture and history will be literally destroyed and eradicated.

Let’s start by cutting back on the HYPERBOLA - the FACT is that Islam (Muslims) are not going to ‘take over’ Europe.

‘Taking over’ implies a forcible action by an aggressor. There is NOT any ‘aggressor’ in Europe, and certainly not Muslim ‘aggressors’. I get really sick of them being BLAMED for what’s happening in Europe.

Nope, it’s nothing like that. What Europe is going through is a TRANSITION, a transition to Islamic rule. The Muslims never ‘stormed the gates’, instead they were INVITED IN by the people of Europe and their elected representatives. Apparently the people of Europe considered their culture to be a failure and it was time to extinguish it, with the hope that an Islamic culture would be more humane. I suspect this is due mainly to guilt regarding the wars of the 20th Century.

And so it begins. The first country to transition will be either Sweden or Belgium. In Sweden, they will be majority Muslim by 2040 (20 years from now), while Belgium is close to that timeline (barring mass expulsions or death camps, this timeline will not change for either country). And then, quite quickly, the remaining countries of Western Europe will also transition to Islamic rule. Eastern Europe will try to hold out, but most likely be forced to go under the Russian umbrella to resist being taken over themselves (unlike Western Europe, Eastern Europe does not desire to fall under Muslim rule - so it really would be a takeover).

So, the real question is what will life be like under Islamic Law, for those who do try to remain in Western Europe? I can only judge by the what we’re all seeing today, and it does look like a significant lifestyle impact, starting with paying the ‘non-believer’ taxes, having to dress properly when in public, not cavorting with the opposite sex, and, of course, the women having mandatory clitorectemies. But heck, anything is better than that Western ‘culture’ with its legacy of warfare.

Anyway, that’s my predication, after many years of thinking about it.

The Bulbul Tarang sounds more like an electric sitar than a banjo.