The City Council of Charlottesville, Virginia has voted to remove a statue of Meriwether Lewis, William Clark and Sacagawea, their Shoshone interpreter, from a street in the city:

The city council voted to direct city staff to create a plan for the removal of the West Main Street statue commemorating the Lewis and Clark expedition during a work session Friday. *** At the work session, councilors discussed the statue with Native Americans and some of Sacagawea’s descendants, who traveled to Charlottesville from Idaho.

Rose Ann Abrahamson, a descendant of Sacagawea and a Shoshone-Bannock woman, said she has seen nearly every depiction of her ancestor in the country.

“This statue in Charlottesville was the worst we have ever seen,” she said.

Sacagawea is an interesting historical figure. As a teenaged young mother she took her child to the Pacific coast and back. She didn’t guide the expedition, but her presence convinced Indians that the Corps of Discovery wasn’t a war party. She gives her son to Clark to raise...and then disappears from history. No one knows what became of her. 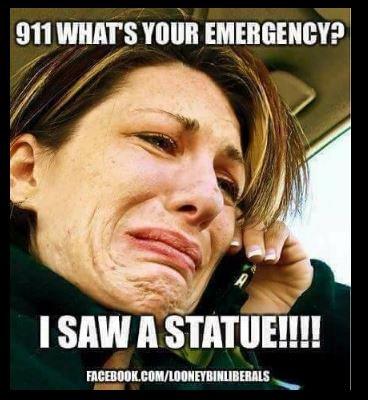 Another shim in the split of our country’s incredible history and the new communist interpretation of revisionism. There’s only two logical conclusions to this age old battle and that is that they win or we fight and purge the system of this progressive disease.

Look forward to Virginia and places like Charlottesville, fall into decay and destruction, as the liberals work their socialist magic there.

Liberals just can't leave well enough alone. And in trying to "fix" something that ain't broke, they make things worse.

If the City really wanted to correct any perceived wrong, then burn the City to the Ground! Give the land back to the Indians, give the Indians all your money, say you are very sorry and ask what else you can do to make it right. That would be a good start Libs.

She was axed due to ‘guilt by association’.

The result of all these efforts will be to remove evidence that American Indians were ever here.

In Wisconsin, some want a local school to change their mascot from “Indians” to something else, even though the whole community is named after the tribe:

11 posted on 11/21/2019 6:08:39 AM PST by Bonemaker (invictus maneo)
[ Post Reply | Private Reply | To 1 | View Replies]
To: DFG
Dustina Abrahamson said Lewis and Clark were “good men” and should be depicted in a new statue alongside Sacagawea as equals.

Sacagawea was not an "equal" in that expedition.

Although, I admit I thought the objection was going to be that Sacagawea was viewed as aiding the invading whites in their genocide of the Native Americans they encountered.

Complete with her distribution of smallpox infested blankets to the ones she betrayed. She did that, right?

I was relieved somewhat to read that they were upset that sculptors creating history a hundred years ago didn’t give her equal footing with Lewis and Clark, not that they viewed her as a turncoat against “her people”.

Whew. Instead of new Leftist Loonery, their objection is the same old feminist crap that even though the commissioners of the work, and the sculptor thought enough to go out of their way to include her, it didn’t make her an equal.

On the other hand, if they had wanted to tear it down due to her collaboration with the genocidal whites, I thought “Hey, Barack Obama’s ancestors hunted down blacks to ship off in the Slave Trade, but nobody holds that against him...”

It’s only happening in counties governed by American-hating RATS.

When Lewis and Clark met Sacajawea, she was the enslaved wife or concubine of a Frenchman. During the course of their trip to the Pacific Ocean, she encountered her own family.

Replace it with one of Fauxcohantas.

Thought you should be informed of this.

17 posted on 11/21/2019 6:25:22 AM PST by aposiopetic
[ Post Reply | Private Reply | To 1 | View Replies]
To: Bonemaker
Next thing you know they'll demand the Iwo Jima Memorial be torn down. After that, Arlington National Cemetary. Will not end well for these people.

I hadn't thought of this but you're probably right. After all, the guy on the left in your picture is Ira Hayes, an Indian. He is high man on the totem pole (totem pole: that's cultural appropriation), and, being high is like being drunk, which is what he died of, and that is, of course, a Native American stereotype.

So, yeah, the Iwo Jima statue will have to go -- its iconic importance notwithstanding.

The American Taliban (democrat party) likes to remove memorials to our past so as to have no impediments to their revisionist history (otherwise known as lies) or reminders of reality. They live in an alternative universe where wind mills (run by unicorn farts Swallwells) power the country, massive taxation and redistribution produces happy serfs with the leftists as the masters (of course), where there are no firearms that are not under government control, where dissent (known to progressives as hate speech) is punished by prison time (kind of like Tommy Robinson in Britain), etc.

And the most chilling aspect of this is that about half the country either through ignorance or envy agrees with their evil agenda.

In 1903, the Wright siblings made the first airplane flight.

George Washington was the parent of our country.

Jeffrey Epstein did not kill zurself.

The apple knew about gravity before Sir Isaac Newton.