Everyone should go to the gas station and fill your tanks today. – There’s no need for panic, but you might save a little money by doing that.

The attack on Saudi Arabian refining and other oilfield infrastructure by Huthi rebels supported by Iran Saturday has forced the Saudi government to shut-in half of its daily crude production. That amounts to about 5.7 million barrels of oil per day (bopd) suddenly disappearing from the global, 100 million bopd market.

Unlike the series of previous Iranian attacks on crude tankers, drones and other facilities that have taken place since April, this one is a big deal. Because none of those previous acts disrupted a significant amount of oil production or movement, crude markets had no measurable reaction to them.

But 5.7 million bopd is a huge quantity of crude, a volume that far out-strips the ability of the few countries with idle capacity to offset. Although the Saudi government attempted to assure markets that it would be able to return to normal production levels by Monday, Reuters quotes a “source close to the matter” as saying that recovery from Saturday’s drone attack will take “weeks, not days.”

Regardless of which case is accurate, it is likely that oil prices will spike to some degree when Asian markets open for Monday trading late this afternoon simply based on the uncertainty of the situation. How high it will spike is anyone’s guess, but a supply disruption of this magnitude could lead to something very significant.

Gasoline prices in the U.S. fluctuate with the global price of crude, so any spike in the oil price is going to quickly feed down to higher prices at the pump. Don’t complain to me – that’s just how the market works.

Secretary Pompeo ✔ @SecPompeo · 16h Tehran is behind nearly 100 attacks on Saudi Arabia while Rouhani and Zarif pretend to engage in diplomacy. Amid all the calls for de-escalation, Iran has now launched an unprecedented attack on the world’s energy supply. There is no evidence the attacks came from Yemen.

Secretary Pompeo ✔ @SecPompeo We call on all nations to publicly and unequivocally condemn Iran’s attacks. The United States will work with our partners and allies to ensure that energy markets remain well supplied and Iran is held accountable for its aggression

9,367 2:59 PM - Sep 14, 2019 Twitter Ads info and privacy 5,691 people are talking about this Iran’s foreign ministry spokesman Abbas Mousavi told Iranian state television that the U.S. accusations were “pointless” and that his country stands ready to conduct “full-fledged war,” according to Reuters. Reuters also quotes an Iranian military official as saying, “Everybody should know that all American bases and their aircraft carriers in a distance of up to 2,000 kilometers around Iran are within the range of our missiles.”

President Donald Trump has rejected counsel from some advisors to mount military retaliations after previous Iranian provocations. After these latest attacks, the President called Crown Prince Mohammed bin Salman Saturday evening to pledge U.S. “readiness to cooperate with the Kingdom, by all means conducive to maintain its security and stability.”

All of this back-and-forth between the involved countries, combined with the Reuters report serve to increase uncertainty. And if markets hate anything, it is uncertainty.

Again, there is no call for panic here, but the best thing for readers to do when they get up and dressed this morning is to drive over to the nearest gas station and top off the tank. If you wait to do it tomorrow, you might be sadly surprised at the price you’ll have to pay.

Though I agree it’snot a bad idea, fact is that their problems don’t really impact the US as much as it used to. It may affect the world’s oil prices, but I believe we in the US can get along just fine without them now. I could be wrong, but I believe we are actually a net EXPORTER of petroleum.

Oil futures were down over the weekend. Thought that was odd. All markets are manipulated.

3 posted on 09/15/2019 5:22:09 AM PDT by MeneMeneTekelUpharsin (Freedom is the freedom to discipline yourself so others don't have to do it for you.)
[ Post Reply | Private Reply | To 1 | View Replies]
To: EyesOfTX
Gasoline prices in the U.S. fluctuate with the global price of crude,

If only we had gone with Henry Fords first prototype. It ran off of and was made mostly of HEMP.

But then the slimes would never have been given enough money to fund satanallahs favorite pastimes, murder and enslavement.

We export CRUDE. We still have refinery limitations in this country and have to re-import that crude after it is refined. We are not fully self-sufficient and likely will never quite get there. But if Canada and Mexico are the buffer that is fine. But I still think we take about 1 million barrels a say from Saudis.

An interesting thing will be to see how the daily Tanker Rates react tomorrow.

I wonder if Kerry and the other democrats advising the Iranians are the John Boltons of Rouhani’s government? Along with crashing the US economy, the dems have no problem watching the Middle East set ablaze. For democrats nothing is too radical as long as it makes problems for Trump.

Read Saudi will be up and running Monday morning.

That’s what I read. Saudi Arabia said production will return to normal levels by Monday.

Yeah, but ANY excuse to raise oil prices will work, valid or not.

Still pretty much maxed out. 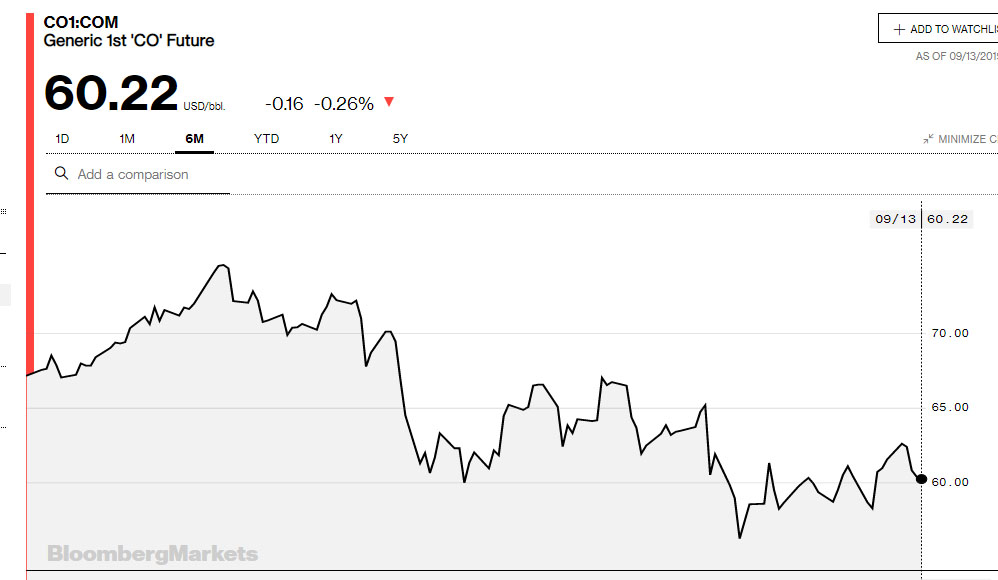 We still have to import to meet our daily needs, we haven’t quite got there yet.

In a rational world, the media would be praising President Trump for working towards energy independence for our country. Seems like he knew what he was doing, doesn’t it?

11% of our oil comes from Saudi Arabia.

I needed to fill up anyway. $2.12, which is cheaper than Sam’s according to Gas Buddy.

If we were under President Hillary, we would be hearing more about how we are part of a global market, and higher gas prices are something we must all get used to, and how Americans must learn to live more like the other peoples of the world live.

It’s a dumb assertion. That an attack on a Saudi oil refinery, producing finished products for Saudi delivery, will cause a cut in Saudi crude oil production and export. Two separate consumer markets.

I never knew that. How much hemp is needed to be grown to support the number of cars on the road we have today? Was it something in line with ethanol or more like plant based diesel?