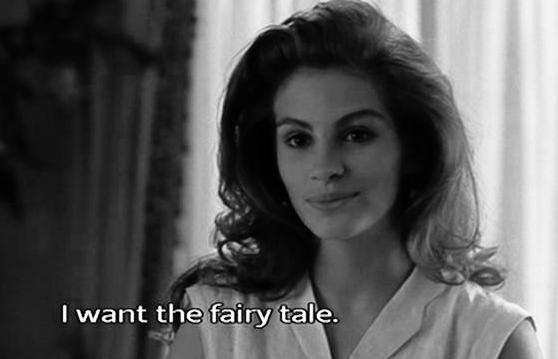 In an interview in Variety magazine this week Julia Roberts revealed that the original ending of Pretty Woman as written was anything but the fairy tale ending of “prostitute-falls-in-love-with-a-rich-john-and-they-both-live-happily-ever-after.” She explained that the original script was “really dark and the ending was really heavy.”

In fact the original script ended with Robert’s character, the prostitute Vivian Ward, left sprawled out in a dirty alley where Richard Gere’s character, Edward Lewis, had chucked her out of the car. For good measure, and to get the point across, he also threw a bunch of money at her as he drove away. Clearly not a story ever intended to be a fairy tale.

But Disney, who bought the script before it went into production, does fairy tales so…they made it into a fairy tale. The public loves happy endings so give the public what they want. By 1990 Disney had already strayed so far from the studio’s original core value of creating wholesome entertainment for the whole family that profit was now the guiding factor. How else to explain a movie glorifying a prostitute’s way of life to deliver on the premise of happily ever after? The impact of such a story on vulnerable young girls was predictable.

Years ago, when I saw the movie through my middle class lens, I saw the title character as a beautiful, young woman who wanted out of “the life.” She’d entered a life of prostitution as a last resort… She was still plucky and moral, just down on her luck. Until one day, her luck turned for the better as a dashing millionaire in the wrong neighborhood needed directions.

But when the two young girls saw this movie, they saw it differently. They saw something that I never envisioned. They saw prostitution as a chance to meet their own Prince Charming, and the movie Pretty Woman was the catalyst for them to enter “the life.”

Each of these girls soon discovered that reality is far different from Hollywood. There was no Prince Charming, no fairy tale ending. They suffered abuse of the worse kind; they lost their freedom and their dignity, and they still experience flashbacks, PTSD, damaged emotions, and lifelong scars.

Yet in the Variety interview Julia Roberts tells interviewer Patricia Arquette the Disney ending placed the movie squarely “in her wheelhouse.” Roots of morality an eightieth of an inch deep, sad, really.

Much has been written about the debauchery of Hollywood, some going back as far as 1955. 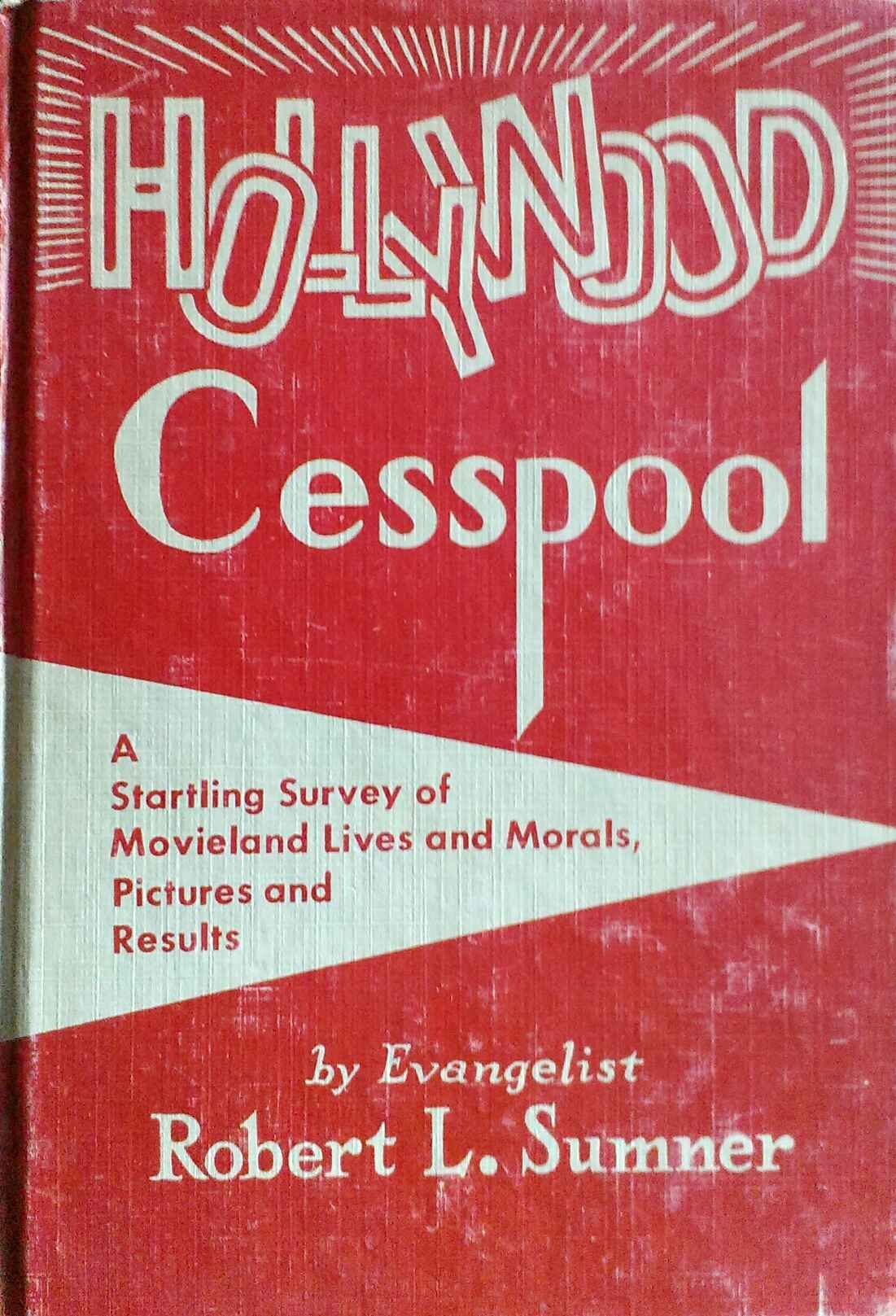 But nobody has excoriated the entertainment business as relentlessly and vociferously as Michael Savage. Love him or hate him, for 20 years he’s been calling out Hollywood for undermining the morals and values of America. He calls Hollywood a sewer pipe that pumps out fetid trash glorifying sluts and degenerates. I can think of nothing to add to that.

It’s certainly hard to argue he’s wrong when you pick up a copy of April’s Teen Vogue and see an article titled “Why Sex Work is Real Work” by Dr. Tlaleng Mofokeng (I swear, that’s her real name, I did not make it up). Even if you agree with Dr. Mofokeng’s premise that sex work of all sorts should be legalized it’s hard to rationalize why promoting the idea of sex work as a career to 13 year old girls is a good idea. Especially when underaged human trafficking for sex is an ever growing problem in the world.

In a sane age any editor of a publication title “teen” anything would have rejected the article out of hand and fired whoever proposed it. But this is not a sane age, these are Heinlein’s crazy years and we’re just living in them (h/t Glenn Reynolds).

But back to Disney: I’m not saying they’re single-handedly responsible for the wretched state of affairs in the world. I do think however that if they’d stuck with the original ending of Pretty Woman instead of going the Cinderella-on-crack route there wouldn’t be so many young women today who think prostituting their way through college is a perfectly acceptable alternative to student loans.

So what have we learned today? *sigh* Not much we didn’t already know: letting immoral pervs set the cultural moral standards will result in a fundamentally immoral society. 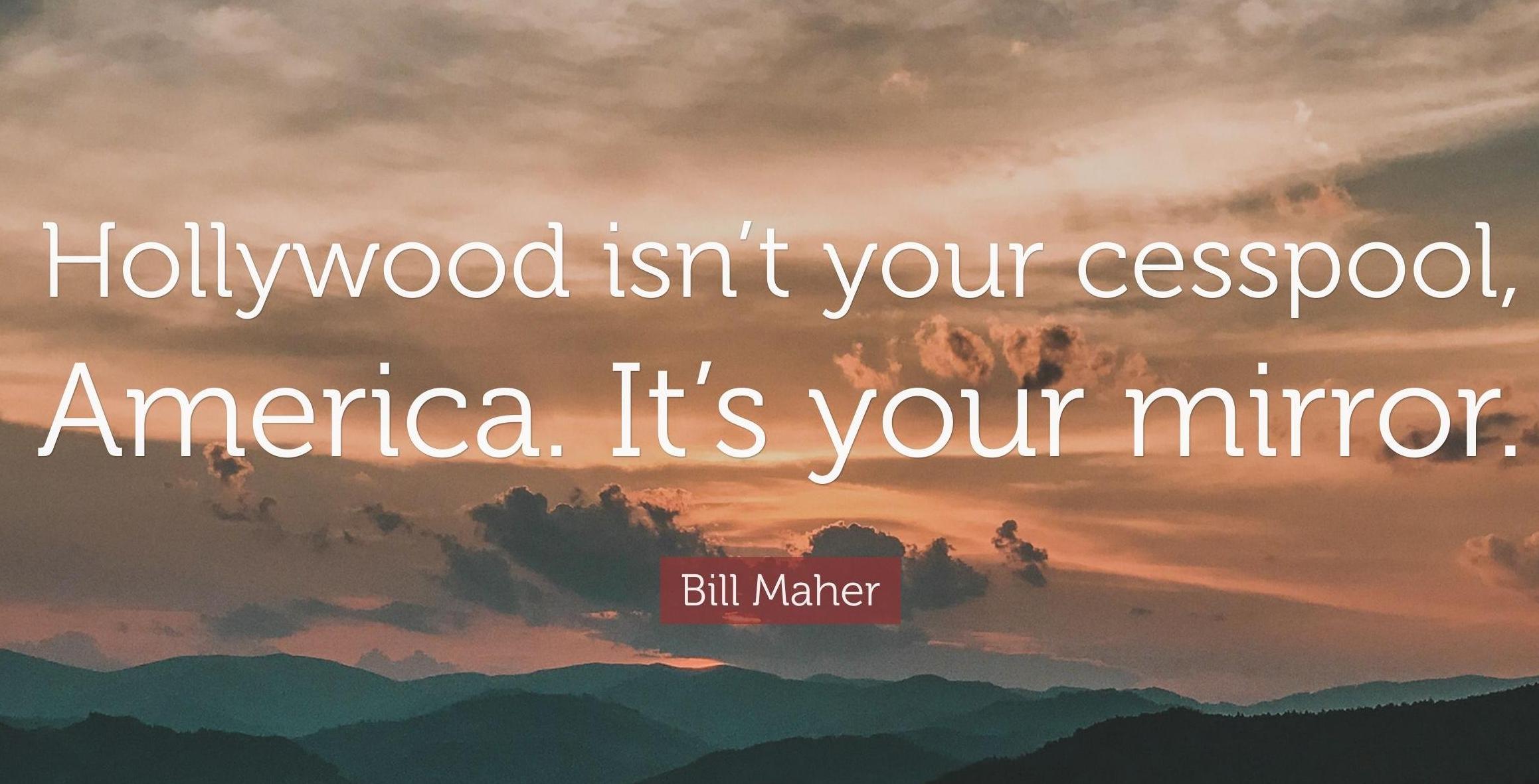 No Bill, it’s your mirror

And from that point forward all fairy tales will be fractured.

Julia Roberts had a nice body back then! Oh, wait. It wasn’t her body...it was photoshop! LOL.

Any beautiful woman who is a prostitute has some real problems or she wouldn’t be resorting to that kind of life when she could have any man she wanted.

Oh, my! That book — “The Hollywood Cesspool”. I’d forgotten all about it. My dad had it in his study, and Bob Sumner preached at our summer camp when I was young, and at seminary when I was a student. (Same seminary he graduated from.)

I don’t think any women resort to that sort of life just because they are homely and can’t bag a handsome or rich man. They all have real problems.

The two go together. Giving the argument to the left with respect to their assertion that their anti-family behavior is natural is surrendering to them.

my idiot mother in law gave a copy of this film to my pre teen girls. “it’s a love story!” No, it’s not.

Civilized society has called out actors as low lifes for centuries. Sure, society enjoys a good show but they don’t want their daughters running off with an actor.

Here is your ticket:

When we saw that movie on HBO many years ago I warned my teen girls that nothing in the film was real. Hookers walking the streets do not look like Julia Roberts, and the lifestyle often leaves them drugged or dead.

However, beautiful women have no shortage of men who are willing to date them.


All part of the plan, this. Take note that Hollyweird is long guilty of promoting all four.
17 posted on 06/22/2019 7:43:49 AM PDT by Olog-hai ("No Republican, no matter how liberal, is going to woo a Democratic vote." -- Ronald Reagan, 1960)
[ Post Reply | Private Reply | To 3 | View Replies]
To: metmom
Any beautiful woman who is a prostitute has some real problems or she wouldn’t be resorting to that kind of life when she could have any man she wanted.>

Nor would a highly successful attorney have anything to do with a supposedly diseased riddled prostitute no matter when she was last tested. The whole story line was just plain stupid.

And basically, couldn't he do any better than old "wolf mouth"?

Actors play parts that are written for them. They play what people will pay to see.

I’ve often thought that really gifted actors, able to brilliantly play many different roles, may be lacking a certain central identity of their own.

We don’t have a lot of actors with the kind of gifts that more of them used to have; but in general I don’t hold great artists to the same standards as others. They seem to come into the world with an extra ‘imperative’ riding them.

So the original ending was more like how Hollyweird really treats actresses?