Alexandria Ocasio-Cortez advisor and Cornell Law School professor Robert Hockett falsely blames “Republicans” for the fact that Ocasio-Cortez’s official Congressional website said that Ocasio-Cortez wanted to get rid of airplanes, stop cows from farting, and give “economic security” to everyone who was “unwilling to work”

Alexandria Ocasio-Cortez recently put a document on her official Congressional website which said she wanted to get rid of airplanes, stop cows from farting, and give “economic security” to everyone who was “unwilling to work.”

After a huge number of people criticized her for this, she took the document down.

Fortunately, the internet archive has a copy of that same webpage from Ocasio-Cortez’s official Congressional website at this link: https://web.archive.org/web/20190207191119/https://ocasio-cortez.house.gov/media/blog-posts/green-new-deal-faq

The original link (which no longer works) to the page at Ocasio-Cortez’s official Congressional website is https://ocasio-cortez.house.gov/media/blog-posts/green-new-deal-faq

In addition, NPR (a highly reliable source, which liberals love) has a copy of the same document at this link: https://apps.npr.org/documents/document.html?id=5729035-Green-New-Deal-FAQ

The document in question says the following:

The Green New Deal sets a goal to get to net-zero, rather than zero emissions, at the end of this 10-year plan because we aren’t sure that we will be able to fully get rid of, for example, emissions from cows or air travel before then.

Any large-scale transformation of society can create the risk of some people slipping through the cracks. That’s why the Green New Deal also calls for an upgrade to the basic economic securities enjoyed by all people in the US to ensure everybody benefits from the newly created wealth. It guarantees to everyone:

The cartoon starts out with a political candidate and his assistant talking in private. Here’s the text of their conversation:

Assistant: What are you offering the peasants in your election speech today?

Candidate: Nothing they can afford to refuse.

The rest of the cartoon shows the same candidate giving a speech to a large crowd of people. Here’s the text for that:

Candidate: Elect me, and I promise you free health care!

Candidate: And jobs for everybody!

Man in the crowd: What do we need jobs for?

Heh heh. That guy in the crowd is a heck of a lot smarter than any liberal politician that I have ever heard of.

Anyway, after a huge number of people criticized Ocasio-Cortez for wanting to get rid of airplanes, stop cows from farting, and give “economic security” to everyone who was “unwilling to work,” Ocasio-Cortez removed the page from her official Congressional website.

What’s even worse is that Ocasio-Cortez advisor and Cornell Law School professor Robert Hockett falsely blamed “Republicans” for the document being on Ocasio-Cortez’s official Congressional website.

Here’s a video of Hockett on Fox news, where he falsely blames “Republicans” for the document that Ocasio-Cortez had put on her official Congressional website. Skip to 1:06

Fortunately, the internet archive and NPR have both saved the document in question.

Hockett is a Professor of Law at Cornell Law School. So I’m 100% certain that he is familiar with the laws against defamation. I hope that he will apologize to the “Republicans” that he falsely accused of lying about Alexandria Ocasio-Cortez’s positions on the above issues.

Watch out for the end game of the Democrats with this garbage!

Cornell Law Professor??? Can you believe that this idiot is a Professor at a Prestigious Law School teaching future Lawyers? No wonder our Courts are filled with ridiculous Law Suits.

I saw this guy on Tucker’s Show. He is a true believer.

His main argument, that’s not what it says. It doesn’t specifically rule out the elimination of Airplanes and ALL Fossil Fuels, blah, blah, blah.

Tucker never asked him the logic of shutting down all the Nuclear Power Plants, the ones that produce NO Carbon Emissions, something that is plainly spelled out in the Policy they are promoting.

Economic security to all who are unable or unwilling to work

That was added so 95% of all present day US politicians would be included....
Doncha know....

Hockett made me want to throw a brick thru the TV rather that just a rotten tomato like the execrable Richard Goodstein gets. I’m sure this guy knows his eccentric and offensive persona drives people like us wild, which is exactly why he does it.

If he’s the brain trust they are relying on, we’ve got this battle won. Just let the idiots parade around display all their ignorance and arrogance, they will destroy the Democrat party quicker than anything the R’s ever could do.

“Watch out for the end game of the Democrats”

Amen. Instead of dismissing this “plan” as total madness or worse a plot to enslave a nation. We are already getting a lot of “let’s look at some of the “good” ideas the are in it and enact those”. The Rats are opening a new offensive here and unfortunately to many Repubs believe the lie that spawned it.

AOC chief of staff is Saikat Chakrabarti? I wonder what a thorough background check would reveal about this person.

The “green” deal mainly consists of shuffling working stiffs’ money into the pockets of LIB socialist idiot tyrants. What a pathetic joke. The puerto rican bartender is a pathetic joke.

Did you really watch the Tucker interview? Tucker did ask him about shutting down the power plants. The guy kept saying that wasn’t going to happen.. He denied everything in the report.

11 posted on 02/10/2019 9:00:32 AM PST by miss marmelstein
[ Post Reply | Private Reply | To 6 | View Replies]
To: Kickass Conservative
I saw this guy on Tucker’s Show.
I did too and watching Tucker try to nail this guy down was painful.
BOR would have had the guy hanging his head and babbling to himself.

Must gave been that Repub VA governor.

I’d rather check his bank account...and his apartment for envelopes stuffed with cash. This has all the makings of an INSIDE JOB! Someone on the Airhead Of Congress’s staff was paid to shoot her flagship plan out of the water.

Watch for more like this. The Republicans are too pussified to actually deploy dirty tricks against an opponent, even if they were convinced AOC is doing anything but helping our side, but the Democrats are not. If Sen. Sinema was told publicly to “watch her ass” for one episode of clapping at the SOTU, imagine the heat that is being put of poor little Sandy from the Bronx. So far she’s resisted all attempted by her “elders and betters” to sit down, shut up, and wait her turn. With luck that will continue!

And if it does, they will have to resort to other means to embarass, undermine, and ultimately primary her out of Congress. Wait and see.

What was the plan with farting cows. Were they going to plan a mass slaughter of all the cattle herds, on all the farms and ranches in this country?

He did deny it all, and maybe Tucker will grow a pair and have him back on and try to confront him again. But that’s not what Tucker does well.

So let them try to put a different shade of lipstick on the pig. We all know it still will go oink oink oink...socialism is socialism even if you scrub the words and refine a few points. They can’t make it be “not socialism” so none of their denials will matter in the end.

Actually, to correct myself, what this guy kept saying is that the report Tucker had was a fake report. That, of course, is a total lie and I’m sure Tucker will correct that on Monday. Personally, I hope he doesn’t have that freak on again. 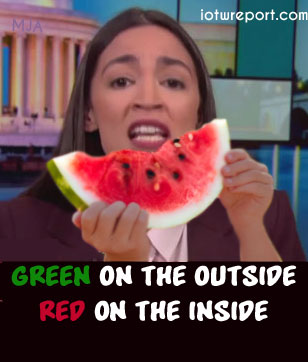 where’s the link he blamed Republicans?