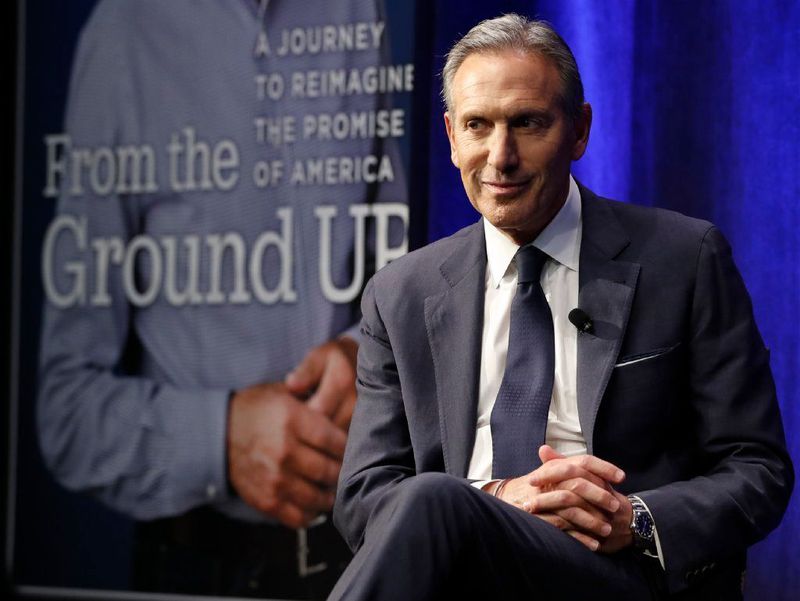 Over the past week, it’s fair to say Democrats have seemed, well, overly-caffeinated.

Howard Schultz, the billionaire former CEO of Starbucks, has the left apoplectic since floating the idea that he is seriously considering running for President — as an independent.

Since embarking on his media tour, Democrats from all corners have come out to torpedo the political newcomer, and self-proclaimed lifelong Democrat.

With visions of Ross Perot, Ralph Nader and Jill Stein dancing maniacally in their heads, no doubt, the fear that Schultz will take votes away from their party nominee in 2020 aren’t unfounded. That’s usually the way a third-party candidacy goes: They don’t just appeal to first-time voters, they cut into another party’s pie as well.

Just ask Hillary Clinton, if you can get her to stop seething. In her book, “What Happened,” the 2016 Democratic nominee said Stein “wouldn’t be worth mentioning” if not for the important votes she got in Michigan, Pennsylvania and Wisconsin. Clinton blamed a “small but significant number of left-wing voters” who “may well have thrown the election to Trump.”

Faith in most American institutions is down, but in particular, voters don’t believe our two-party system is working.

Where the heck has Cupp been? In the past two years Democrats have seemed like meth-addled crack addicts to me.

Not that they've been acting particularly sane in the last twenty years.

Republicans ARE NOT turned off about the PARTIES. At least not now. We have a leader.

The two-party critics are back in their “stuck on stupid” mode. I argued with a number of them leading up to the 2016 election about how a third party candidate can’t just show up on the presidential ticket and expect to be taken seriously—whether that’s one of the “bigger” third parties like the Libertarians or Greens, or one of the smaller parties, or the independents like Schultz in his “Starbucks Party” of one.

Will they get votes? Sure. Schultz might get quite a few (hence the anger particularly from the Dems)... but that doesn’t mean they’ll be taken seriously as candidates, and even less so if they actually succeed in winning the presidency.

If people hate the two major parties so much, where is the grassroots movement for LOCAL candidates? Why not try to run some people with those other outlooks in a smaller forum and build up some credibility and something resembling a voter base? (And yes, I realize the Libertarians and Greens among others do have some... but even for them there would need to be many more to reach the critical mass to have anyone to rally for and support a third-party president)

Guess what Howard, You will not find the numbers for your idea of a perfect world here.

Your ideal does not belong to Real Americans.

What will the dem elite do to this guy if he makes noises like he is going to run a lefty 3rd party ticket?

If there are significant ‘independent’ votes, they can’t manipulate the ballots as easily as just two major parties. The math is harder.

If you are so afraid voters will support an Independent instead of your party’s candidate, that says a lot about your party.

Nope, but nice try. The only people worried about Schultz, who's very much anti-Trump and liberal (and white, and rich, and sold coffee for years; if he'd have used his retirement nest egg to set up a nationwide medical marijuana business that employs illegal aliens, oooh, they'd get chills) are the Demwits, like Bloomberg, and the idiot governor of Washington.

Americans are sick of the Demagogic Party, and hated Hitlery (as Norm M said) so much that they elected someone they hated even more just to show how much they hate her. Hitlery should have put Bernie on the ticket, period. But she didn't, because, **** him. That led to Jill Stein. It led to Susan Sarandon (and other, non-celebrity women) to repudiate the election, or vote for Stein, or anyone besides Clit-none (and they would never vote Pubby anyway).

Perot's candidacy did nothing but help elect Clinton, period.

John Anderson may have nudged Reagan over Carter, but the margin of Reagan's victory was such that it probably didn't matter (and Anderson probably drew from both sides, since he was a kinda goofy Republican).

I’m sure that neverTrumper S.E. Cupp would love having the opportunity to vote for Howard Schultz.

You do know that our side WANTS him to run, right?

Cupp is a huge NeverTrumper.

She’s been attacking Catholic School Children from Kentucky for smiling at a deranged Refrigerator Repairman Indian...

Exactly. We should all thank Mr. Schultz for his courage in challenging a party which is heading into Stalinism at breakneck speed, which is very dangerous in a world of people who have not been educated concerning the lessons of history, not just of our own nation, but of the world. People don't even have to go back into history. They only need to inform themselves about the problems of Venezuela. It is unbelievable that Ms Kamala has launched her Presidential run by promising to take over fossil fuels (oil companies) and healthcare (taking over the private plans of 177,000 Americans). She and her now far left party support open borders and unfettered immigration, taking guns from private citizens so that only the government has weapons, attacking and erasing religion principles, some are moving to erase “So help you God from the oath to take office.” Just yesterday we learned that some (Governor of Virginia who is a pediatric neurologist!) are advocating actual infanticide as a tool of abortion, reducing the value of life for all of us. It is the innocent baby today..Tomorrow, who will they decide to eliminate? These things are the play list for a “Banana Republic style” takeover of our government and our nation. Everyone who knows anything as a citizen of this country should be extremely upset at what is taking place. I think Mr. Schultz and perhaps other liberals on the left are recognizing that those on the far left are a different breed who look to be dangerous to the Democracy and freedom we stand for. Do enough people who understand all this have the courage it takes to get involved and to speak out in a world where we do not know whether we can trust our FBI and where our children now think that socialism is great? Will the lust of a few for absolute power overwhelm the many? If more, without apology, follow Mr. Schultz's example, we might begin to see a hint of sanity creep back into our politics.

Well, a girl’s gotta find something to idle away her time.

Democrats from all corners have come out to torpedo the political newcomer, and self-proclaimed lifelong Democrat.

Commies would convince Kasich to run Independent as well.