You can’t help but be somewhat amused by the unhinged media’s reaction to the Trump-Putin press conference. The cohort that idolized Russia Russia Russia during its heyday suddenly finds itself in full agreement with Ronald Reagan - it is indeed the Evil Empire (having colluded with Trump to steal the election from the smartest woman in the world).

They’re only 27 years late, and now it’s all Trump’s fault, because, ya know, their guy told Putin to Cut. It. Out! 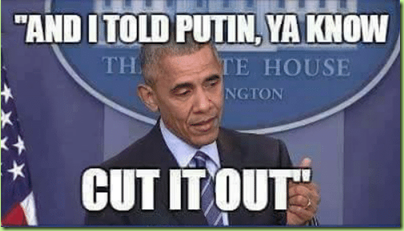 So there you have it: all President Trump would have had to do to placate the media yesterday was drop Dave Coulier’s famous Full House line on Putin. 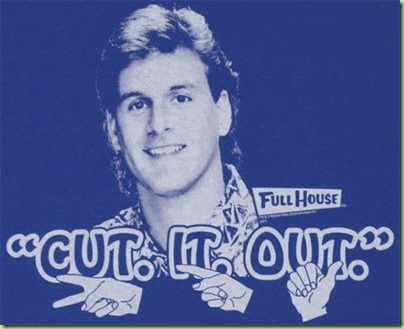 “The 1980’s are now calling to ask for their foreign policy  meme back.”

LOL Putin must have been tickling the sissy boy.

I may be able to listen to Rush today but many (not all) supposed conservative or libertarian talk radio hosts lost their sh!t yesterday and today claiming with certainty that Russia stole the documents for wikileaks and that Russia wanted to see Hillary lose (and did accomplish that goal) and “the other side of the aisle” going so far as to say that Trump conspired with Russia for such help.

It’a like the fannypack brigade who “concede” that man is causing the temperatures to rise and that if we don’t stop right now will will be dead 5 years ago.

Trump is perfectly statesmanlike and the left, never-Trumpers and media have a collective cow and are now openly calling for his overthrow - fulfilling their fantasy that we live in the third-world shithole they’ve tried to make our country into for the past 50 years.

Of course, if Trump had come out and attacked Putin they would have said “see! He’s a vulgarian! He has no business being President!” and ... well, openly called for his overthrow.

You can’t win with these people. You can only defeat them. And it’s past time people on our side started showing some signs of doing that (are you listening, Jeff Sessions? Time to prove what side you’re on once and for all).

Was he colluding with Russia?

5 posted on 07/17/2018 5:07:35 AM PDT by Liz ( Our side has 8 trillion bullets; the other side doesn't know which bathroom to use.)
[ Post Reply | Private Reply | To 1 | View Replies]
To: All
At the now infamous joint Trump/Putin presser, Putin was asked whether he would be willing to cooperate with the Mueller investigation and a request for extradition of the 12 intelligence agents Mueller accused of infiltrating and manipulation of the US US election process.

Putin declared that his government would be willing to allow Mueller investigators access to the 12 Russians in exchange for American cooperation in bringing to justice Clinton associates, including Mueller cohorts involved in illegal business transactions that allegedly took place in Russia, involving, according to Putin's statement, over $400 million dollars that was taken out of the Russia illegally.

A former undercover informant says he provided evidence to the FBI during President Obama’s first term that Russia was assisting Iran’s nuclear program even as billions in new U.S. business flowed to Moscow’s uranium industry.

William Douglas Campbell told The Hill his evidence included that Russia was intercepting nonpublic copies of international inspection reports on Tehran’s nuclear program and sending equipment, advice and materials to a nuclear facility inside Iran.

Campbell said Russian nuclear executives were extremely concerned that Moscow’s ongoing assistance to Iran might boomerang on them just as they were winning billions of dollars in new nuclear fuel contracts inside the United States.

“The people I was working with had been briefed by Moscow to keep a very low profile regarding Moscow’s work with Tehran,” Campbell said in an interview. “Moscow was supplying equipment, nuclear equipment, nuclear services to Iran. And Moscow, specifically the leadership in Moscow, were concerned that it would offset the strategy they had here in the United States if the United States understood the close relationship between Moscow and Tehran.”

A spokesman for former President Obama did not return multiple requests for comment.

Circa 2010--Ex-Pres Clinton in Moscow doing his hokey hillbilly act for Putin as strategic US uranium deposits
were sold off to Russia for Big Bucks facilitated by Obama and Secy Clinton. Bill globe-trotted to set up the deal.

"Hahahaha. Well, ah'll be ding donged. Aint that a pig in a poke, as they say in Arkansas."
"Obama and Hillary worried about US ntl security? Hahahaha. You gotta be kidding, Vlad."

Obama and his cabal wanted uranium sold to Russians and then to Iran. No? I’m so confused.

Even Fox and Friends is whining that Trump didn’t “stand up” to Putin, call him a liar and endanger our already fragile relationship with Russia.

Hannity seems to be the only one there that gets it, and it’s really very simple - does it do our country any good to antagonize Putin and kill any kind of positive future relationship in the bud? No. Then why do it? This is exactly what Trump was saying during the press conference when he said he was putting diplomacy above politics, but these rabid “how dare you not behave the stupid way I think you should behave!” idiots in the media are completely oblivious to that - and it’s not even very difficult.

I have never been able to understand, from the very beginning of this nonsense, exactly why Russia would have preferred Trump as President over Hillary.

They said the same things about his meeting with little Kim. Like any former president or Hillary would call these two out if they ever met, such B.S.

P.S. Does anyone here remember all the shit-stirring by the left about Russia before Trump even announced. They were trying to foment WWIII to get Hillary elected to save us all. Russia is the Deep State’s boogie man, plain and simple. They went from Qaddafi to Putin.

Thinking we need to look at what has been done against Russia by our CIA and Bill Browder.

Will the hysterical left ever tell us EXACTLY just what “meddling” actually means in this fantasy of theirs?

I hate that commercial with that david whoever.

15 posted on 07/17/2018 5:51:15 AM PDT by mabarker1 (congress- the opposite of PROGRESS!!!)
[ Post Reply | Private Reply | To 1 | View Replies]
To: HartleyMBaldwin
I have never been able to understand, from the very beginning of this nonsense, exactly why Russia would have preferred Trump as President over Hillary.

I'm sure the Russians would've preferred for Mrs. Bill Clinton to win, after all, she is known to be grossly negligent with tens of thousands of emails including some that were secret and even top-secret.

On the other hand, you could look at this and think that Putin knows our press as well as anybody but Rush Limbaugh. For a measly one million dollars he placed some ads on the longshot that Trump would win knowing the left would cause trouble for a long time with their claims of "collusion". He knew the left couldn't handle the truth that Mrs. Bill Clinton was such a terrible candidate that she would lose to Donald Trump. Putin's meager investment hit the jackpot.

Trump did not claim t peer into Putin’s eyes and see his soul, like George the Younger did. He is basically saying neither side wants war, and that the USA didn’t always look out for her interests even as pursuing hers. That is changing. Now, the U.S. will pursue U.S. interests, which may not correspond with the one-worlder interests.

That is a good point about the divisiveness and obstructionism brought about by President Trump’s election; I hadn’t considered that.