So, Kanye West has decided to leave the 21st century plantation. 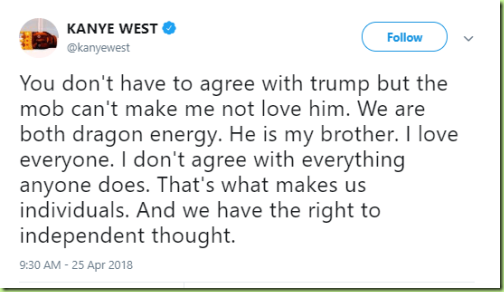 Way, way off the plantation:

There will be hell to pay. For starters the media will try to make him out to be a mad man.

The artist’s latest statements follow media outrage over the weekend after he claimed to love the thinking of conservative black activist Candace Owens, AKA Red Pill Black.

On Monday he continued outraging the left by tweeting videos of conservative icon Scott Adams, the creator of Dilbert, examining the “golden age” taking place and discussing breaking free from “prisons of the mind.”

That day West also fired his manager Scooter Braun, and followed up with a series of messages saying he wanted to take over all aspects of his work, leading to reports he’s having a mental breakdown.

Independent thought!?!  A BLACK man??? Of course he’s crazy. What else could it be?

OK, maybe he’s a little crazy: nobody loves Hillary. And I suppose you have to be a little crazy to think you, as a black man can think for yourself.

Kanye revealed just how dangerous it is for a black man in America to leave the plantation. But he is fearless.

In fact, he’s so fearless he reminds me of our President.

In more ways than one:

For one thing, they both know how to melt the internet whenever they want to. And don’t forget, Kanye’s planning to run for president too.

To be truly honest, Kanye has mental problems. Don’t use him as an example for a “conservative” Black man.

People are going to make him look insane ?

He needs no help in that endeavor.

The man says he’s Jesus, he tells people that he’s a genius. He understands nothing and is basically an 8 year old boy with a ton of money.
He says that he’s a leader of a generation. That he’s the most important man ever.

He went on TWITTER to ask Mark Zuckerburg for billions of dollars !

Now a “runaway!” Soon he, Candace Owens and any others are to be hung up and “whipped” (ala: Kunta Kinte) into submission (like Shania) as are so many other “runaways” from the Leftist “plantation”.

950 AM in Detroit (a CBS (See B.S.) radio affiliate) this morning was already alluding to him being mentally off balance.

Kayne who? More noise to be ignored. 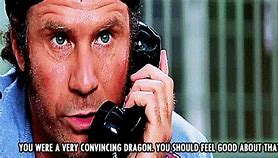 And your comments have the distinct odor of a concern troll.

Seems like We’re seeing a lot of “conservatives “ downplaying positive news for our side or making excuses for the democrats when negative news is reported. After all these years of Democrats getting away, literally, with murder, I love to hear all that is going on.