The Trump’s first State Dinner was held in the State Dining Room, where such affairs were intended to be held, rather than the circus tent constructed on the south lawn for many of the Obama era state dinners. 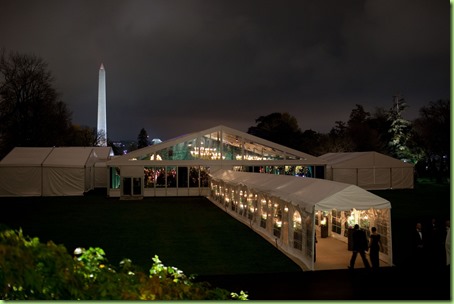 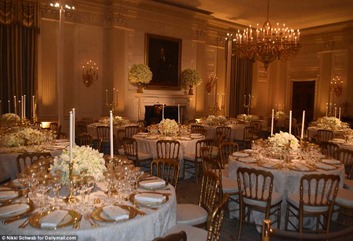 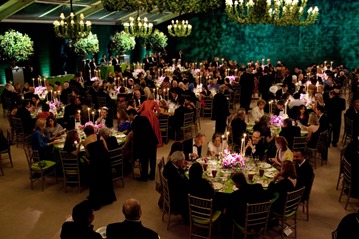 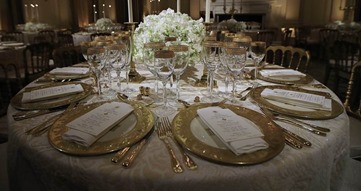 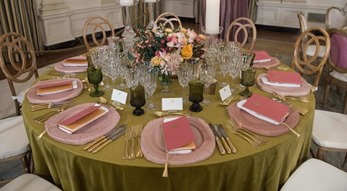 And the table setting was boringly classic, left, unlike the Obama’s state dinner for Italy, right which was contemporary pink and green.

Of course you don’t need to erect a tent if you don’t invite half of Hollywood and all of the supportive press corps to break bread with you like they did during the Obama era state dinners:

Mrs. Trump’s gown was elegant: Chanel black Chantilly lace haute couture gown hand-painted with silver and embroidered with crystal and sequins. There will certainly be much talk of its expense just as there was most certainly none about Lady M’s Naeem Khan gown covered with hand sewn crystals and sequins. 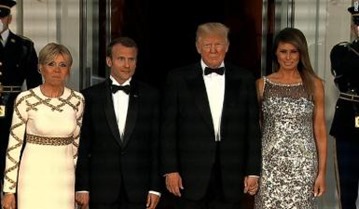 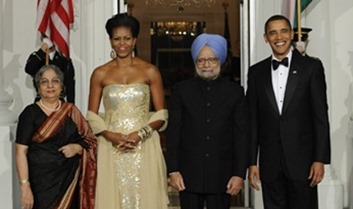 Vogue, compelled to cover the FLOTUS’ gown last night as that is their business, was guardedly non-committal as to its virtue or vice while Elle loved the dress but managed to track down some of the nastier tweets to include in its coverage.

But all in all, the dinner was considered a success:

About 130 guests, seated at round candle-lit tables decorated with bouquets of white flowers, dined on rack of lamb and nectarine tart served on a mix of china settings from the presidencies of Bill Clinton and George W. Bush. After-dinner entertainment (was) courtesy of the Washington National Opera.

Opera? What? No Beyoncé, role model for young girls? Figures, everyone knows Donald Trump is a sexist. 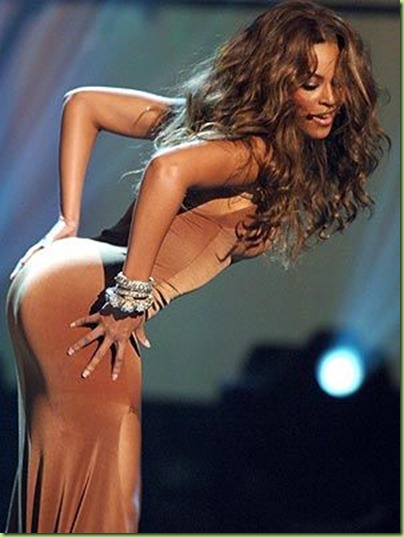 Are there any clips of last nights entertainment? Pictures?

I would like to see them, too. So far all I have seen is the above and post/photos that made everyone look fat.

The obamas were all about having lots of worshipers around them at all times.

Yes, the Trumps have brought class back to the WH.

I’m sure the British are quietly in a dither, had they not blown it with having their hands in attempting to prevent Trump’s election, and had May not been such an awkward bumbler, the first State Dinner would have been them. Seems sort of unusual for it to have been France, we’re not all that close historically, well other than Lafayette and the Revolutionary War that is.

Would have loved to hear they sang ‘Do you hear the people’ from Les Miserables. Probably would have been gauche.

And...therein lies an interesting point...we are at "war" right now...just a different one...

We sent out the clowns...

Melania did the American people proud with the elegant State dinner she supervised.

Melania’s grace and dignity has brought those two attributes back to our White House!! She’s obviously helping to MAGA!!!

I guess this is the only party in town!