Attention teens: YOUR texting and driving kills 269 times as many people as school shootings!
wordpress ^ | March 25, 2018 | Dan from Squirrel Hill

Attention teen protestors: YOUR texting and driving kills 269 times as many people as school shootings!

Wikipedia has this comprehensive, well documented article called “List of school shootings in the United States.”

School shootings are so rare and infrequent that it wouldn’t be good to just look at any one year, so I’m going to look at all the school shootings from January 1, 1999 (the year of the Columbine massacre, which is often cited as the beginning of the “modern” era of school shootings) and go up until March 20, 2018, which is the most recent school shooting (Great Mills, Maryland) on the chart.

During those 7019 days, a total of 286 people were killed in school shootings.

That works out to 0.0408 people killed per day in school shootings.

Meanwhile, according to the Insurance Institute of Highway Safety, texting and driving kills an average of 11 teenagers every day.

This means that your texting and driving kills 269 times as many people as school shootings.

If they had brains, this would generate cognitive dissonance.

I don’t think that will happen, though.

You have a right to text and drive but not to shoot people. Or something.

The legal age for a driving license must be raised to 21.

Easy - ban cell phones in automobiles - I’m sure this Hogg clown will go along with that.

Eliminate texting while driving?
How about disabling texting app while phone is in motion. I believe technology is already in the phones.

FWIW.... where I live, it isn’t the teens who are texting and driving. It is the adults. By adult, I don’t mean 18 or 21 either... it is the 40 year olds and older. Twice in the last 6 months, I have had a near head on collision... both times, I was able to see middle aged (40 plus) adults coming into my lane while texting. I’m not saying teens don’t do it... I am just stating I see the majority of older adults doing it where I live.

texting and driving kills an average of 11 teenagers every day.

More teenagers are killed by automobiles than guns. So we need to ban automobiles. 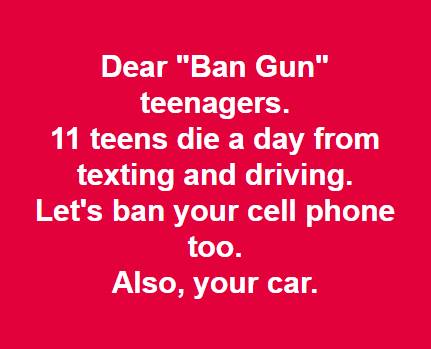 More are even killed in school athletics than in school shootings.

Wow, automobiles are finally shown for death traps. Now time to talk about teens killed in the cities like Baltimore while not in school.

Privileged, entitled children need to have their cell phone and automobile privileges revoked.

There are times when people are moving in cars, buses, trains or planes and aren't the driver.

Also I generally turn off the GPS unless I am actively using it with a mapping app. Google doesn't need to know where I am 24 hours a day.

About 3000 babies are deliberately killed by “doctors” every day in the US. I want to hear Comrade Hogg justify that.

Not only that, but how many teens have been bullied into committing suicide by their peers who are now concerned about their own personal safety? I still think the Parkland shooter was bullied to the point he struck back in the only way he felt he could.

What you say is true.
Alternative ... password (parent controlled?) to enable no text while moving?

What we need is common sense Texting Device control.

A National Data Base of prohibited persons,

A License and Fee Requirement to purchase a Device

Mandatory software limiting the rapidity with which the texts can be sent,

Devices can have fixed batteries only, no interchangeable high capacity batteries,

and a Minimum Age Requirement of 35 years to purchase, use or have possession of such a Device.

Such requirements are only Common Sense, infringe on no one's Rights, and if they save just One Child are completely reasonable.

Teen or old fogey or anything in between; anyone using a phone while driving needs a Rodney King style beat down, a sentence of ‘attempted murder’, a fine enough to cover any hospital bill ever printed out, and to never be behind the wheel of anything again. No mercy, no excuses, no extenuating circumstances nor any appeal. I don’t care if they are 16 or 106.