Voevodsky’s friends remember him as constitutionally unable to compromise on the truth — a quality that led him to produce some of the most important mathematics of the 20th century. 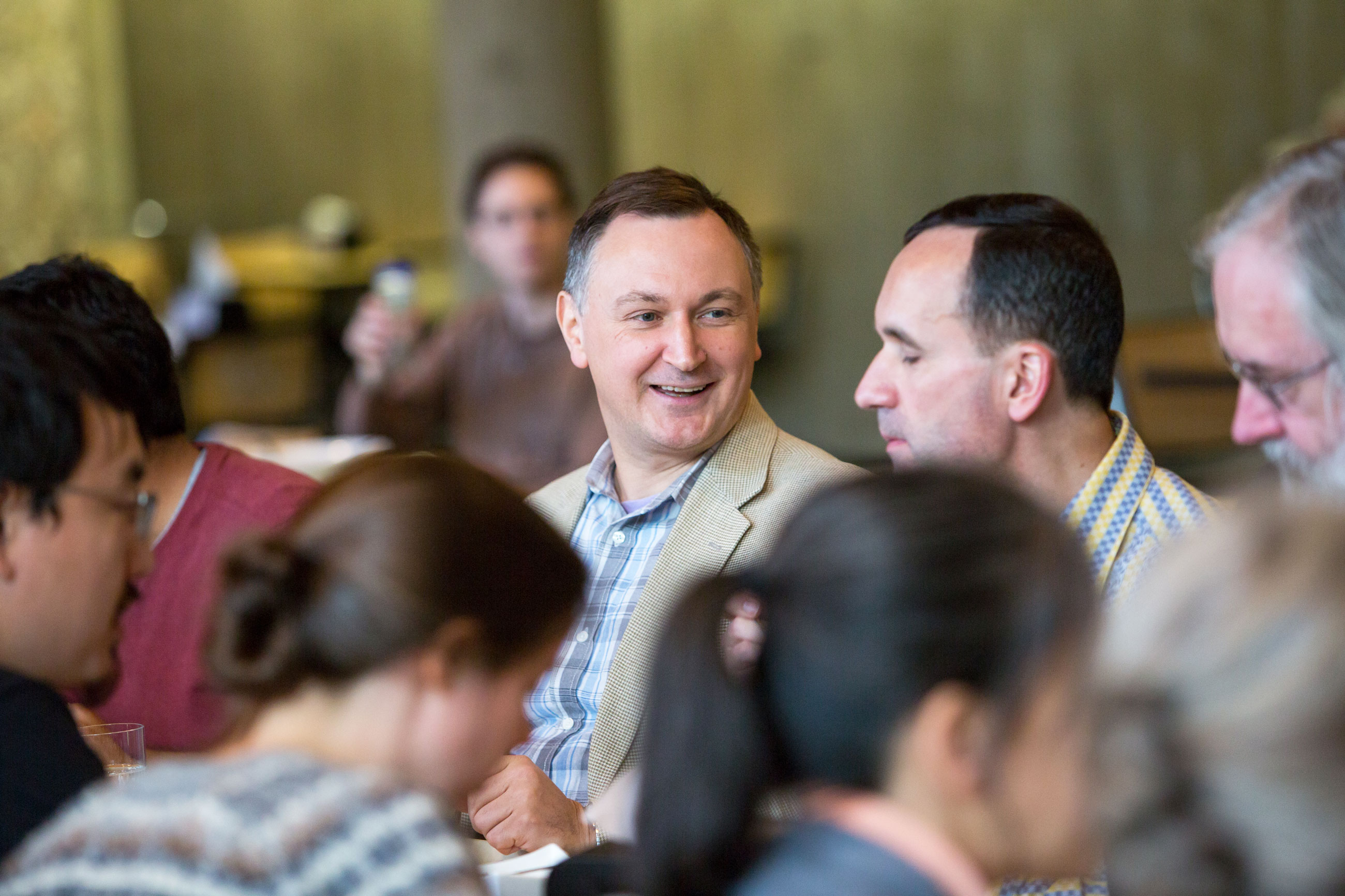 Vladimir Voevodsky at the Institute for Advanced Study in 2016.

In math as in life, Vladimir Voevodsky played by his own rules.

Voevodsky, a Russian-born mathematical prodigy, produced a string of daring insights in the 1990s that revolutionized one of the central fields of mathematics and established him at the pinnacle of his profession. His work continues to reverberate today. On Sept. 30, Voevodsky died in Princeton, New Jersey, at the age of 51.

The cause of death was an aneurism, according to his former wife, Nadia Shalaby.

Voevodsky was born in Moscow in 1966 and showed an independent streak early on. He was kicked out of high school three times and flunked out of Moscow University, after which he continued to independently study mathematics.

“He picked up things by reading books and thinking on his own,” said the mathematician Eric Friedlander, a friend of Voevodsky’s who sat on his thesis committee and is now at the University of Southern California. “There are actually quite a few mathematicians that can do this, but they still go through the standard hoops of getting A’s in their classes and impressing their elders. I don’t think Voevodsky was very interested in that.”

Following his unsuccessful college stint, Voevodsky collaborated with another Russian mathematician, Mikhail Kapranov, who is now at the Kavli Institute for the Physics and Mathematics of the Universe at the University of Tokyo. They published several papers together that caught the attention of mathematicians at Harvard University, who invited Voevodsky to enroll there as a graduate student in 1990 even though he had never finished college. Edward Frenkel, a mathematician at the University of California, Berkeley, was also a graduate student at Harvard at the time. The two of them became friends. Frenkel recalls that Voevodsky barely passed the qualifying exam required of all incoming students.

“He had the most difficulty doing algebraic geometry problems even though he was about to revolutionize the subject,” Frenkel said. “It shows mathematical research is not a linear process.”

At Harvard, Voevodsky began to develop the idea that would define his career: a long-sought connection between the fields of topology and algebraic geometry.

In topology, mathematicians classify shapes. One of their most powerful techniques for sorting shapes is called homotopy theory. Within homotopy theory, two shapes are considered the same if you can deform one into the other without cutting or tearing. This makes the cube and the sphere equivalent: Round off the corners of the cube or flatten the sides of the sphere and they look the same.

Topologists have developed sophisticated algebraic techniques that can be used to precisely describe this kind of equivalence. For much of the 20th century, mathematicians dreamed of finding a way to export these techniques so that they could be used by people working in the field of algebraic geometry, which deals with the precise geometric shapes described by equations.

In the 1960s, the mathematician Alexander Grothendieck advanced a deeply influential theory about algebraic geometry. He said that the geometric shapes coming from equations are constructed out of fundamental pieces that he called “motives.” If you can understand and classify these motives, Grothendieck theorized, you can understand and classify the equations.

Homotopy theory seemed in spirit as if it possessed the right kinds of tools for analyzing motives. But for decades, mathematicians (including Grothendieck himself) could not figure out how to translate techniques from the fuzzy world of topology — where a sphere and a cube can be considered equivalent — to the precise world of geometric shapes described by equations.

Voevodsky figured out how to make a translation. With these new techniques in hand, he proceeded to solve the Milnor conjecture, a fundamental problem that had seemed unsolvable prior to his breakthrough. For that achievement, Voevodsky was awarded math’s highest honor, the Fields Medal, in 2002.

“His work really started new chapters of mathematics,” Frenkel said. “Very few mathematicians get to do that.”

Voevodsky spent nearly his entire professional career at the Institute for Advanced Study in Princeton. He started there on a long-term fellowship that the institute has offered to only three other mathematicians: Ngô Bảo Châu, Larry Guth and June Huh. He later joined the permanent faculty.

Over the past decade, Voevodsky shifted from homotopy theory to a grand project to rewrite the foundations of mathematics in a language that would make it possible for computers to check mathematical proofs. The project, which he called “univalent foundations,” was born out of a personal experience. In 1999, Voevodsky discovered an error in one of his earlier papers. The episode led him to conclude that mathematics needed computer-checked proofs to ensure that results were entirely correct.

This desire to root out errors was consistent with other sides of his personality. Voevodsky’s friends and colleagues remember him as completely without artifice and almost constitutionally unable to bend to social conventions.

“He was unfazed by authority or status,” Shalaby wrote in an email. “Not out of rebellion, but because he was missing the gene that detects status and makes people respect it over merit.”

It was a quality that helped Voevodsky develop some of the most visionary mathematics of the 20th century.

TOPICS: Science
KEYWORDS: dies; mathematician; stringtheory; visionary; voevodsky Navigation: use the links below to view more comments.
first 1-20, 21 next last
“He had the most difficulty doing algebraic geometry problems even though he was about to revolutionize the subject,”

Never throw up your hands, announce you're no good at something and give up. With persistence, you could reach an understanding that far surpasses that of others and revolutionize the subject! 'Course, you could also waste your life trying.

I think you gotta love what you’re workin on...he sounds like a brilliant kinda guy...he studies what he wants..he is not cluttered by all the accoutrements of modern living...but if you’re not good at sometin’...it could mean its cuz you aint no good!

5 posted on 11/12/2017 9:18:30 PM PST by Getready (Wisdom is more valuable than gold and diamonds, and harder to find)
[ Post Reply | Private Reply | To 1 | View Replies]
To: LibWhacker
Wow. Amazing individual. Seems so many mathematicians die young. Today 51 is very young.

Galois, a mathematician whose work forms the foundations of our modern cryptographic systems, died at the age of 20 in a duel. Age 20 is way too young. And it just goes to show, just because you're a genius doesn't give you common sense or make you a marksman.

I do not have the mind for math, and never will, but I detect something interesting here. A well told story about this man and his life would make a good movie. With the right actor and director, I would go see such a film.

This would be the kind of film teachers would bring their young students to see and report about later. A film to make high level math appealing, even cool to some degree. His theories would have to be well watered down for the general public.
If Alec Baldwin wasn’t so pigheaded, he would be good in such a role because of his natural brashness and overconfidence.

Looks like a site that I will need to keep up with.

Very interesting. Thanks for the article. “Edward Frenkel, a mathematician at the University of California, Berkeley,...” works in Evans Hall. In 2009 I took a set of 20 undergraduate students on a tour of Cal and we walked around the third floor hallway in Evans Hall, the math building at Cal. The hallway was dark, we walked slowly and quietly, noticed a few doors were open and saw offices with lights on. A student asked me, “Can on knock on the door and say ‘hi’?” I said, No way. Let’s go. There are four kinds of math: pure, physic, models, and computers. Cal is one of the best schools for pure mathematics. Thankfully, there are medical test today for aneurisms.

Nobody but nobody really understands how the human brain works. It 90% phospholipid. Just how those fats chrn up there and create complex human thoughts and insights is the science of the new millennium. Obviously this man like a few precious others had unique and rare circuits that made his insights possible. Perhaps if civilization survives and advances one day humans may come to understand the physiology of thought.

10 posted on 11/12/2017 9:44:03 PM PST by allendale (.)
[ Post Reply | Private Reply | To 1 | View Replies]
To: All
In topology, mathematicians classify shapes. One of their most powerful techniques for sorting shapes is called homotopy theory. Within homotopy theory, two shapes are considered the same if you can deform one into the other without cutting or tearing. This makes the cube and the sphere equivalent: Round off the corners of the cube or flatten the sides of the sphere and they look the same.

Something fun from Wiki:

Intuitively, two spaces are homeomorphic if one can be deformed into the other without cutting or gluing.

A traditional joke is that a topologist cannot distinguish a coffee mug from a doughnut, since a sufficiently pliable doughnut could be reshaped to a coffee cup by creating a dimple and progressively enlarging it, while shrinking the hole into a handle.

The Man Who Knew Infinity is a film about the Indian mathematician Srinivasa Ramanujan whose natural talent got him invited to England. He was like a race horse that had to be slowed down: he got the correct conclusions most of the time with a glance and needed to learn how to back them up with proof.

I’ll have to check that movie out.

That pretty well sums it up.

he got the correct conclusions most of the time with a glance and needed to learn how to back them up with proof.

There are some physicists who work that way, too.

Have considered that the tissue mass is not the source of the insights, merely the facilitator of the soul / body connections?

*** “Have considered that the tissue mass is not the source of the insights, merely the facilitator of the soul / body connections?” ***