I’ve decided to reread a Tom Wolfe book during my week away from fake news. But which one? He’s such a prolific writer and the choices span both genres and generations: Bonfire of the Vanities, The Right Stuff, From Bauhaus to Our House…since I just reread - and reported on - The Electric Kool-Aid Acid Test last year, during The Occupation, so that’s out:

Interestingly, what was “new” journalism then – injecting yourself into the story and relating the facts as you  fancifully see fit, is now just journalism. Once the purview of Fine Arts and English programs, non-fiction today has oozed its way into J-schools as “literary reportage” which helps explain situations like those examined in yesterday’s post. Most journalists are now writers of creative non-fiction – a genre that not too long ago would have been considered an oxymoron.

Although Bonfire of the Vanities was intended to be a set piece of the ‘80s, it has aged amazingly well; still admirably reflecting today’s glorification of all things non-western, non-white:

And who couldn’t love a book that coined the term “social x-ray” for anorexic women-of-some-means? But I think for my week off I’ll go into the way-way back machine and tackle Radical Chic and Mau-Mauing the Flak Catchers. It too has aged surprisingly well, tracing the roots of today’s liberal inanities through two essays, "These Radical Chic Evenings"  and "Mau-Mauing the Flak Catchers." 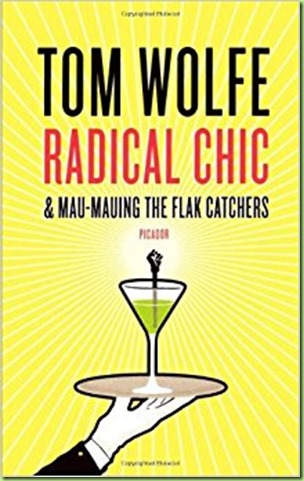 Both examine the intricate balance of black rage and white guilt. Part 1:

The first piece is set in the duplex on Park Avenue in Manhattan inhabited by conductor Leonard Bernstein, his wife the actress Felicia Cohn Montealegre, and their three children. Bernstein assembled many of his wealthy socialite friends to meet with representatives of the controversial Black Panthers and discuss ways to help their cause. The party was a typical affair for Bernstein, a longtime Democrat, who was known for hosting civil rights leaders at such parties.

The Bernsteins' usual staff of white South Americans served the party. Some of the Bernsteins' typical friends in the arts and guests in journalism (including Oscar-nominated director Otto Preminger and television reporter Barbara Walters) are labeled the "radical chic," as Wolfe characterizes them as pursuing radical ends for social reasons, partially because organizations like the National Association for the Advancement of Colored People had become too mainstream. Wolfe's criticism is implicitly of the general phenomena of white guilt and armchair agitation becoming facets of high fashion. Wiki

Originally published in 1970 all you would have to do to update for today’s audience all you’d have to do is would be to change the names of the condescending do-gooders; all of the objects of Wolfe’s original ridicule have passed on, with the exception of the immortal Barbara Walters.

The second part of Wolfe's book is set at the Office of Economic Opportunity in San Francisco which was in charge of administering many of the anti-poverty programs of the time. Wolfe presents the office as corrupt, continually gamed by hustlers diverting cash into their own pockets. The essay centers on the irony of these failed programs fortifying not the diets but the resentment and contempt of the Black, Chicano, Filipino, Chinese, Indian, and Samoan communities of San Francisco.

Wolfe describes hapless bureaucrats (the Flak Catchers) whose function was reduced to taking abuse, or "mau-mauing" (in reference to the intimidation tactics employed in Kenya's anti-colonial Mau Mau Uprising) from intimidating young Blacks and Samoans, who are seen as reveling in the newfound vulnerability of "the Man". The flak-catchers smile pathetically, allowing their tormentors to indulge themselves in abuse; the process is seen as a farcical but useful expedient, condescending toward the resentment of these communities. He described one mau-mauer who would show up at the offices and hand over ice-picks, switch-blades and straight-razors that he said were taken from gangs, in exchange for payments from the program. As a result, much of the money of these programs was not reaching its intended recipients, rendering the programs largely ineffective. - Wiki

The only thing that hasn’t aged well is the cover of the original edition: 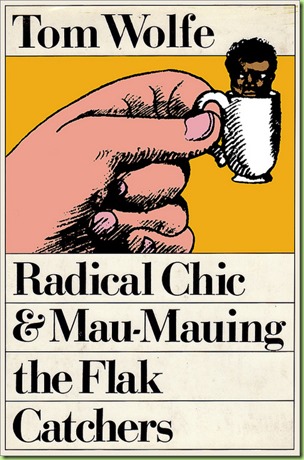 Progressives have been so successful at their self-loathing load of bull crap that political correctness now deems the original cover art to be racist. Thank you Obama.

Don’t waste your time on Wolfe’s Back to Blood unless you are interested in something bordering pornography. Very disappointing examination of Miami life.