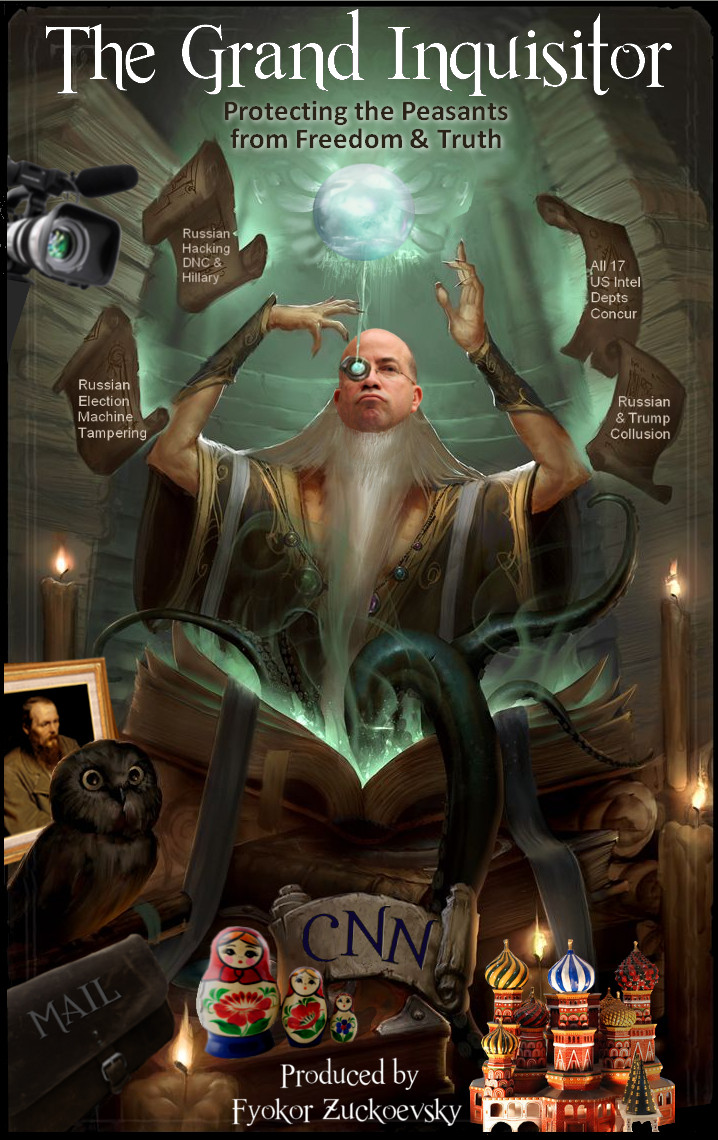 Includes a CNN meme with a Russian theme... 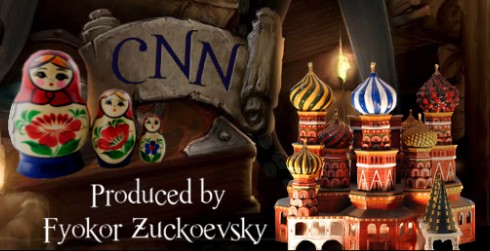 At the heart of every state, of every denomination, of every large organization sits an ogre who accrues power. His role is stark: to control the masses under his authority. Freedom, personal dignity, honor, justice, morality, these are trinkets, baubles dispensed by the ogre as toys to keep his subjects in submission.

Thanks poconopundit! Dostoevsky was a Christian intellectual who wrote about the darkness of power-hungry intellectuals. The Grand Inquisitor was the greatest expression of this, with Raskalnikof of Crime and Punishment coming in as a close runner-up.

I once read a Dostoevesky analyst describe his works as follows: when portraying intellectuals, D makes you feel how twisted and disturbed they were, while when portraying Christians, D made them resonate with mystical experiences. It made for painful reading whenever the scene involved an intellectual, such as the Grand Inquisitor or Raskalnikof, and it made some fascinating reading whenever the scene involved a Christian.

Our fake manipulative media fancies themselves to be intellectuals, whereas we see them as power-hungry control freaks. If D were still with us, he would portray them in the darkest light.

Dostoevsky’s amazing. Thanks for sharing.

Thanks Fungi! Dostoevsky is one of the greatest voices in Western Civilization.

I am currently reading Dostoevsky’s “The Possessed” which is about a group of aristocratic left-wing snowflakes who are early 19th century socialists.

They are remarkably shallow, venal, prideful, elitists, much like those of today.

8 posted on 07/10/2017 10:00:34 PM PDT by left that other site (You shall know the Truth, and The Truth Shall Set You Free.)
[ Post Reply | Private Reply | To 1 | View Replies]
To: Vision Thing
Some very nice contrasts you made there, Vision, between the mystical Christian and power-hungry and disturbed intellectuals.

Perhaps it's no surprise that Christians -- men of reason whose minds can fathom the laws of societal growth and decay -- are also the most receptive to mystical experience.

Maybe mysticism and reason are not at opposite poles after all!  The power of great thinkers like Emerson, Alan Watts, and Wittgenstein is their ability to leap above reasoning to get a brief glimpse of God or the Great Wave that connects each of the tiny droplets.

When I read Leftist (fake) intellectuals, their writing doesn't unify thoughts or clarify issues: they usually just muddy things up.  The same goes for a guy like George Will, who sounds smart, but ends up saying nothing profound.  And perhaps this is why Will has been a fixture of Washington intelligentsia for decades: his mental processes mirror those of the nihilist Leftists.

As I researched this vanity, I came across a telling interpretation by Peter Brooks, a NYTimes columnist:

As a political and spiritual parable, The Grand Inquisitor is ambiguous.  It offers no authoritative answer.  It suggests that truth lies only in the dialogue, open-ended, anguishing.  It might be recommended reading for writers of party platforms, which tend toward self-righteous authoritative pronouncements on anguishing issues.

In that paragraph, I think Brooks has accidentally described Leftist intellectuals very well. They are only comfortable with ambiguity. They cringe at authoritarian answers.  And truth is merely an open-ended dialogue by an anguished soul.