I have a little gift for Progressives, who would otherwise spend the holiday gnashing their teeth over President Donald J Trump’s tweet in which he shows a 10 year old clip of someone with a blond pompadour body slamming a corporate logo to the ground. My gift is a short video to give them something new to obsess over: the stability of the Yellowstone Caldera.  Hard as it is to believe if it erupts with it’s full force it would be more disastrous than Trump beating Hillary. Honest. 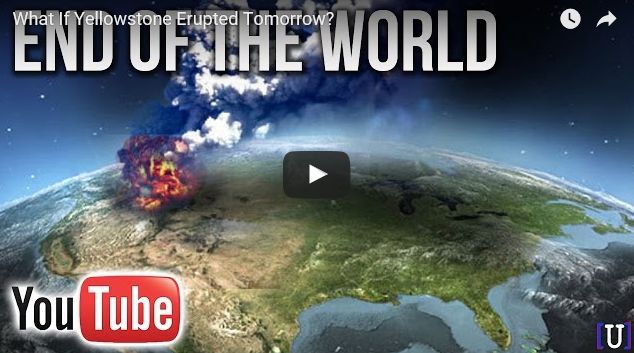 Wow! Even global warning pales by comparison. Pity, that, for sure. A disaster that isn’t of (trigger alert!) mankind’s own making.

Meanwhile, read all about the demise of “norms of presidential behavior” from Victor Davis Hansen (spoiler alert: the Left practically invented the erosion movement).

Bill Clinton redefined presidential behavior when he had sexual relations with a 22-year-old, unpaid intern (so much for power imbalances as sexual harassment) in the presidential bathroom off the Oval Office, lied about his recklessness to his family and the country, smeared Monica Lewinsky, and then wheeled out to the Rose Garden feminist cabinet officers like Madeline Albright and Donna Shalala to deny and defend his unsavory predatory behavior. After that sordid episode, the apologetic Left lost all credibility as an arbiter of presidential norms…

From that brief Bush hiatus, it was a short slide back down to GloZell and Obama’s adoration in the White House of Kendrick Lamar’s “To Pimp a Butterfly” (read some of the “ho’s”, “n—as”, and racist lyrics of that album and cf. the celebration over the corpse of a judge on the cover). – American Greatness

TOPICS: Humor; Politics
KEYWORDS: hillaryclinton; obama; trymp; yellostone
1 posted on 07/03/2017 5:39:01 AM PDT by NOBO2012
[ Post Reply | Private Reply | View Replies]
To: NOBO2012
resident Donald J Trump’s tweet in which he shows a 10 year old clip of someone with a blond pompadour body slamming a corporate logo to the ground.

It's not someone with a blond pompadour. It actually IS Donald Trump.

70,000 years ago, the Toba eruption reduced the human population to only a few tens of thousands. The Yellowstone caldera is believed to have about twice that energy. And now for the good news.

It's what they do.

4 posted on 07/03/2017 6:01:10 AM PDT by Arm_Bears (Rope. Tree. Politician/Journalist. Some assembly required.)
[ Post Reply | Private Reply | To 1 | View Replies]
To: NOBO2012
"Bill Clinton redefined presidential behavior when he had sexual relations with a 22-year-old"
-Actually she was 19 when the affair started. When Bill Clinton said the words "I did not have sexual relations with that woman Ms Lewinsky" it was at a time everyone was calling her a "child". When I heard Clinton says those words for the first time, my first I thought then was that the biggest thing he wanted to do was emphasize 'woman' in that sentence not as much deny the affair.

Cannikin is a good metaphor for President Trump too.
https://youtu.be/OMmFy4NdA8s

"The Yellowstone caldera is believed to have about twice that energy."

Yellowstone is the largest super-volcano on earth.

"And now for the good news."

It isn't about to blow.

Don’t concede the Monica Lewinsky story to the “fake news” cabal; while she demonstrated how gross the president was, she was a sideshow in a much larger story (with much more relevance today): She was subpoenaed by Paula Jones’ lawyers in a very real sexual harassment suit in which a woman (not a girlfriend) described the president’s penis because he whipped it out. He settled that lawsuit for nearly $800K, and that is completely whitewashed from the narrative. Monica was a pig involved with another pig; Paula Jones was a very real victim of sexual harassment by a pervert.

Prediction: ANY bad behavior from geysers/volcanos/earthquakes in Yellowstone or anywhere else in the U.S. will be blamed on fracking.