What part of “Free Speech” do you not understand?

“(The idea that the government may restrict) speech expressing ideas that offend … strikes at the heart of the First Amendment,” wrote Justice Alito in his opinion. “Speech that demeans on the basis of race, ethnicity, gender, religion, age, disability, or any other similar ground is hateful; but the proudest boast of our free speech jurisprudence is that we protect the freedom to express ‘the thought that we hate.'”

“A law found to discriminate based on viewpoint is an ‘egregious form of content discrimination,’ which is ‘presumptively unconstitutional,'” Justice Kennedy wrote in a separate opinion. “A law that can be directed against speech found offensive to some portion of the public can be turned against minority and dissenting views to the detriment of all. The First Amendment does not entrust that power to the government’s benevolence. Instead, our reliance must be on the substantial safeguards of free and open discussion in a democratic society.” - Red Alert

There are no “conditions.” And it’s unanimous. 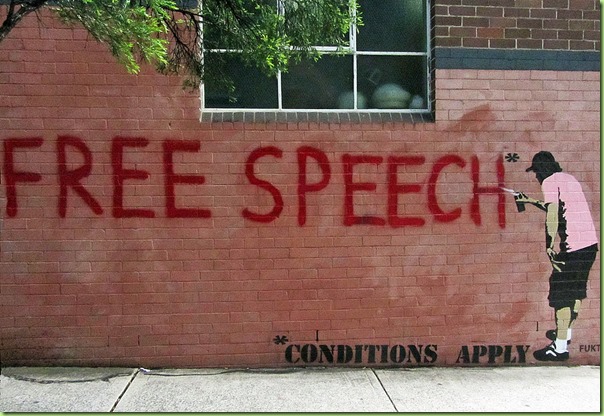 Of course you know, but think left-wing that thought they'd always be in charge, and they still are in charge of way too much.

Free Speech, however, is proscribed in the workplace, the church, the school and the home. As an employee I will fire you if you speak contentiously about me or my business. A teacher requires civility and obedience in the classroom. A church may dismiss a member for speech that is offensive. Mom (or Dad) may wash your mouth with soap if you say that word one more time. Government, however, may not restrict my offensive speech. OTOH blocking traffic is not speech. It is blocking traffic. Rioting is not speech. It is rioting. Deliberately lying about a person you dislike is speech but it is not free. It is slander.

It was always understood, until the Warren Court, that ‘freedom of speech’ meant freedom to criticize government (up to the point of sedition), not freedom to distribute pornography or to defraud others.

” It must mean that somewhere some derelict circuit court upheld this attack on the first amendment. “

Doesn’t look that way. From the decision:

“Tam sought federal registration of the mark “THE SLANTS.” The Patent and Trademark Office (PTO) denied the application under a Lanham Act provision prohibiting the registration of trademarks that may “disparage . . . or bring . . . into contemp[t] or disrepute” any “persons, living or dead.” 15 U. S. C. §1052(a). Tam contested the denial of registration through the administrative appeals process, to no avail. He then took the case to federal court, where the en banc Federal Circuit ultimately found the disparagement clause facially unconstitutional under the First Amendment’s Free Speech Clause.”

The PTO appealed and it went to SCOTUS.

America, you are the last bastion. Thank God the left is not prevailing on this one. Funny they love free speech when it is performing mock assassinations.

Free speech is dead in the rest of the English speaking world, and the West. (Australia has a list of banned websites, Canada has its human rights tribunals, and the UK is trying to stomp out expressions of bacon)

Indeed. Ultimately it is the government we are concerned with, but the left will try to muddy the waters with those other examples. Yes, of course, if someone came into my home and used profanities in front of my kids, and refused to stop, I have a right to ask them to leave. Although I consider that as promoting my property rights.

Yes, and slander is an important subject to consider. The courts in the Commonwealth go way beyond objective lies. Even stating a subjective opinion is now still considered slander. Even of public figures. We have seen this numerous times in Canada.