TOPICS: Arts/Photography; Politics
KEYWORDS: deplorableart; googleimages; mashupimages; politicalart Navigation: use the links below to view more comments.
first 1-20, 21-25 next last
1 posted on 06/02/2017 4:37:30 PM PDT by poconopundit
[ Post Reply | Private Reply | View Replies]
To: HarleyLady27; Be Careful; Fiddlstix; JoSixChip; kanawa; Yaelle; SubMareener; Vision Thing; ...
A non-geeky guide to creating image mashups you can post on FR.  Here I explain the methods I use.  Yes, I've probably broken every rule in the graphic designer's book, but it works for me.

This is a very satisfying hobby for those of us who lead a Deplorable lives staring at light-emitting glass screens.   And if you're so inclined, you might find it's a nice diversion from reading a book or watching TV. 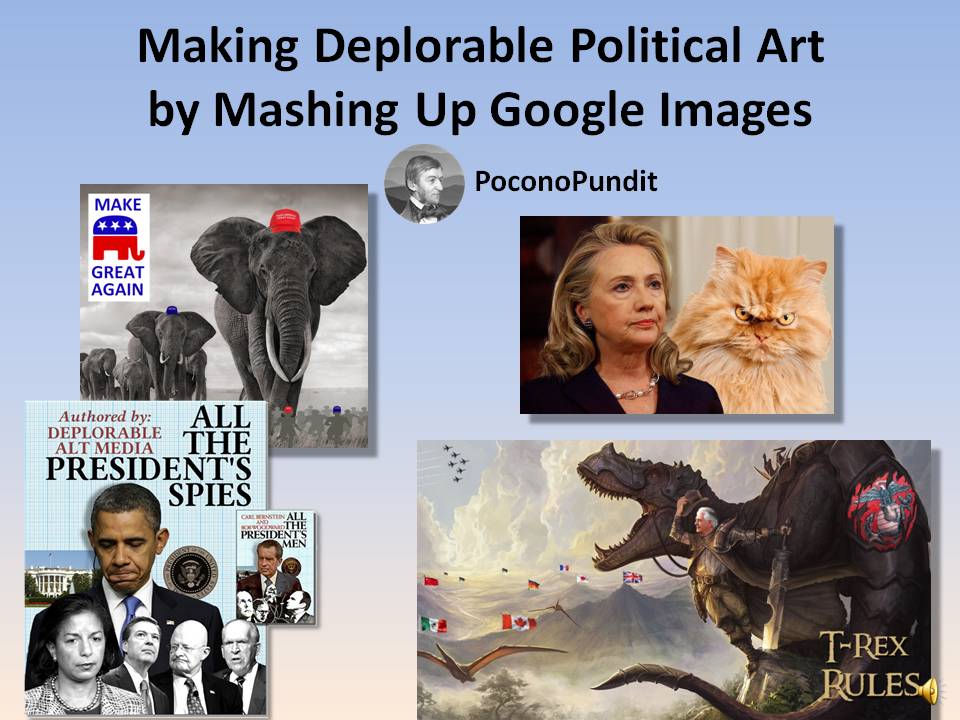 After years of viewing images of this and that, Lois L., Comey, BO’B, IRS director K, and on and on - we the people have realized one fact. IF we are able to see up their nose, they should be deemed to be elitist and probably crooked. Just words to live by from this deplorable.

I always liked the “All The Presidents Spies” image. It was very well done.

Thanks for including me. I’ll have to check this out. The ones showing are pretty good except I can’t who that is on the T-Rex.

Great vid, Poco! Are you the one who has been posting so many classic/funny images on FR? If so, thank you so much for the good work and please keep it going.

I often cut & paste the good ones and send them to my friends and enemies. Ha!

I have a great theme for you to work up, perhaps as a book cover with Maxine Waters and Hillary on the front:

-— “GREEDY LIBERAL - while posing as being generous and compassionate, they actually want to take your money using government force.”

-— “Inside, learn how it is actually liberals who are the greedy ones because they want to take $hit from other people. Conservatives just want to be left alone to provide for their families.”

Can you put one of your prize-winning images like that together? I’ve told Dinesh D’Souza that he (or Anne Coulter) needs to write a book with the title “Greedy Liberals.”

I hereby relinquish any copyrights over the book title name.

If you can put a classic image together, it should be tweeted to Dinesh and Anne Coulter. One of them will take it and run with it. A book like this needs to get out and read by the sheeple.

Thanks for including me in your ping... interesting stuff.

Thanks, Jim. T-Rex would be Rex Tillerson, Secty of State.

11 posted on 06/03/2017 2:51:06 AM PDT by poconopundit (FR: Self-Reliant Lovers of Liberty who can't stop the Chatter)
[ Post Reply | Private Reply | To 8 | View Replies]
To: AlanGreenSpam
Thanks for you comments, Alan. Great to hear you've been taking some images and giving them a wider distribution to friends.

I like your theme of "Greedy Liberal". The difficulty of that one is there are so many forms of greedy liberal aren't there?

You've got a Warren Buffet who sides with Obama to stop the Keystone pipeline so his Burlington Northern railroad can make a killing transporting oil.

There's the lowly Obamaphone lady multiplied by the millions who feel entitled to the paycheck that someone else earned.

And then there are the greedy leaders like France's Macron and Pope Francis who support the elitist EU bankrupting and destroying a continent. And figure why not shame Americans to pay for their schemes.

The title probably needs to be expanded. For example: "The Liberal Use of MY Money: In Greed We Trust"

I use GIMP too and throw everything on PowerPoint to manipulate and save.

Just bumped into another free program yesterday, RealWorld Paint, looks promising to add to the arsenal.

Very appreciated tip about RealWorld Paint. It looks very promising. Notice it has a vector feature I'm eager to check out.

For my images, I bought a domain name that mirrors the images stored on my desktop in about 30 folders. Then when I want to use an image a second or third time, I do a search in Windows Explorer then drag the image into a box that generates the HTML code for post on FR.

I like your idea for a Ping List. I had to look up what meme really means and found this on Wiki...

A meme (/ˈmiːm/ MEEM), is "an idea, behavior, or style that spreads from person to person within a culture".

A meme acts as a unit for carrying cultural ideas, symbols, or practices that can be transmitted from one mind to another through writing, speech, gestures, rituals, or other imitable phenomena with a mimicked theme.

Supporters of the concept regard memes as cultural analogues to genes in that they self-replicate, mutate, and respond to selective pressures.

This concept is very interesting.

This is my third video produced and it was the most ambitious. The transitions in PowerPoint caused havoc when I imported into Camtasia. Next time, I'm going to treat my slides with transitions separately because they tend to mess up the timing of other slides in the video.

For my next video, I'm thinking of stringing together a few video clips with the speech Trump gave at the official opening of Trump International at the Old Post Office.

It was a speech with great imagery compared his mastery of the trade of construction and renovating buildings with that of renovating a nation and getting the most potential out of America's people.

—”The difficulty of that one is there are so many forms of greedy liberal aren’t there? “

Yes indeed! That would make for many chapters of the book, e.g.

-One chapter would be “Greedy Wealthy Liberals” (Buffet, Gates, Musk)

-Another would be “Greedy Obamaphone Liberals” (free stuff for ME!).

-Another chapter would be about those who “Punish successful people (by using gov’t to steal their property).

-And one chapter could be Greedy Race Baiter Liberals (Sharpton, Jesse Jackson, the BLM -aka “Chocolate Klan”)

Alan, good work.  I think the book would be a winner.  I like the way you've scoped out the chapters.  We need to check, but I do not believe it's been done before.

Breaking down and explaining the greedy personalities would be a great service to the MAGA movement.  So I applaud the effort and would contribute in some way.

My own inclination is to produce an interactive tool that explains the various forms of greed.

In my work life, I research the software solutions for technology fraud.  And it's fascinating to learn the various forms of fraud and how they are defeated.

So the "greed story" is much the same way.  How can we map out the way greed is perpetrated?  A detective story engages people.

FReepers were excited to follow the twists and turns of the 2016 campaign -- and now Trump's march to MAGA. It's like a Grimm's fairy tale of slaying the dragons in the corrupt swamp.

I've long felt the Milton Friedman's of the world -- though they achieved a lot -- did not bring their knowledge down to the level of the common man.

Now, I'll admit that economics is a very complex subject to teach.  But I loved Economics in One Lesson by Henry Hazlitt.  That kind of work has multi-generational value.

And just now as I write to you, I stopped for a few minutes and found The Law by Frederic Bastiat, written in 1850.  The English translation is cumbersome, but the ideas are spectacular.  And he explains the whole area of "Legal Plunder" -- another word for Liberal Greed.

So the better translation and distribution of this work could be the framework for drilling down on particular forms of greed -- most of which didn't exist in Bastiat's time.

So I ramble on because I, like you, want to contribute something of enduring value to help the MAGA cause.

I am pinging a few people who may have some ideas to help flesh out this idea -- and play Devil's Advocate.

If it's an interactive map of Liberal Greed, this image I made could be turned into that. You see a particular kind of greed in the picture, so you click on it and some text pops up to explain what it is.

I feel this would make a nice educational tool. 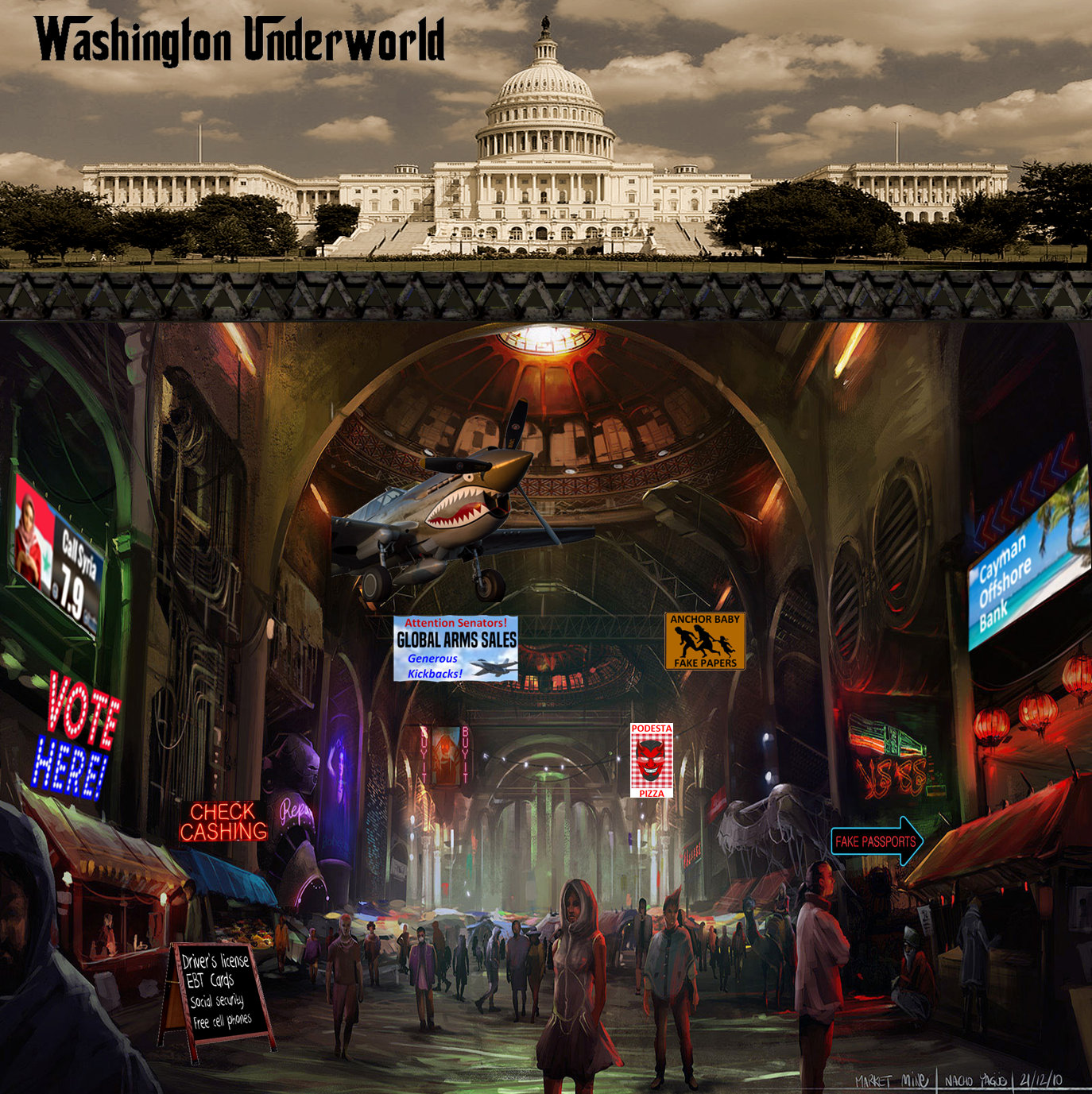 Also, the constant reference to chocolate. Chocolate = candy The word summons up an image of the Candy Man. The horror movie done by Clive Barker

Bill O'R enjoyed using the term 'pinheads'. This summons up an image of the movie HELLRAISER and the character 'Pinhead'

When BO'B first appeared on the political scene, his name was thought to make him of IRISH descent. The MFM went gaga attempting to find family history that this would be true. Of course, when he made his first trip to the Emerald Isle, they made a big to do about his 'going home'. THUS: Barack O'Bama became plain ol' BO'B to this average deplorable.

The idea of Kathy G as one of the French Revolution knitters is self apparent. Pink knitted caps, guillotine, collecting heads.

We all know of the Midas touch. Now we have seen the BO'B touch, nothing to nothing; chaos to follow.