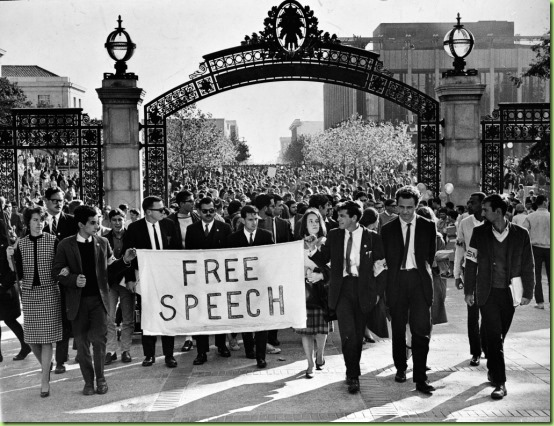 Campus protest in the 60’s has somehow morphed into “Shut It Down!” chants

This is deeply disturbing: yet another campus incident of censorship,

A throng of angry protesters converged at Claremont McKenna College on Thursday and effectively shut down a pro-police speech as they surrounded the building, forcing the speaker to give the talk via livestream to a near-empty room as they yelled “F*ck the police” and “Black Lives Matter” and banged on windows. – The College Fix

This time the target was Heather MacDonald a Manhattan Institute scholar and author of the 2016 book The War on Cops. Some of the protestors were students, the rest a crowd of who-knows-who summoned by Facebook:

Protesters organized the protest on Facebook earlier in the week, calling it “Shut Down Anti-Black Fascist Heather Mac Donald” and suggesting she pushes “fascist ideologies and blatant anti-Blackness and white supremacy. … Together, we can hold CMC accountable and prevent Mac Donald from spewing her racist, anti-Black, capitalist, imperialist, fascist agenda.”

The shut down was a profound violation of one of our basic American rights: freedom of expression. Apparently all it takes these days to be denied this right on college campuses is to be accused of being a racist, misogynist, homophobe, Islamophobe, or “fascist”  - which I doubt most of the protestors can even spell let alone correctly define.

In her article about the incident, Get Up, Stand Up,  MacDonald asks:

Where are the faculty? American college students are increasingly resorting to brute force, and sometimes criminal violence, to shut down ideas they don’t like. Yet when such travesties occur, the faculty are, with few exceptions, missing in action, though they have themselves been given the extraordinary privilege of tenure to protect their own liberty of thought and speech. It is time for them to take their heads out of the sand.

Accusing them of having their heads in the sand is a kindness. Who do you think are teaching this little robots about the meanness and danger of conservative thought? Heather continues:

The Rose Institute for State and Local Government at Claremont McKenna had invited me to meet with students to talk about my book, The War on Cops, on April 6. Several calls went out on Facebook to “shut down” this “notorious white supremacist fascist Heather Mac Donald.” A Facebook post from “we, students of color at the Claremont Colleges” announced grandiosely that “as a community, we CANNOT and WILL NOT allow fascism to have a platform. We stand against all forms of oppression and we refuse to have Mac Donald speak.” A Facebook event titled “Shut Down Anti-Black Fascist Heather Mac Donald” and hosted by “Shut Down Anti-Black Fascists” encouraged students to protest the event because Mac Donald “condemns [the] Black Lives Matter movement,” “supports racist police officers,” and “supports increasing fascist ‘law and order.’” (My supposed fascism consists in trying to give voice to the thousands of law-abiding minority residents of high-crime areas who support the police and are desperate for more law-enforcement protection.)

Ironic, is it not, that this type of campus protest against freedom of expression is actually an all out assault on the very liberal principles they portend to champion? I think here would be a good place to insert this little tale about free speech that FrancinePink posted the other day: 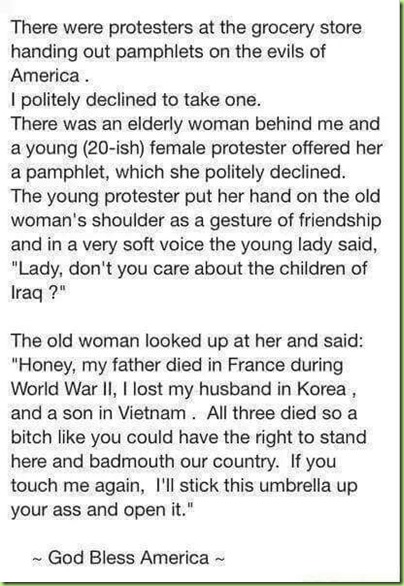 And with that I leave you with this musical accompaniment: take it away Bob: 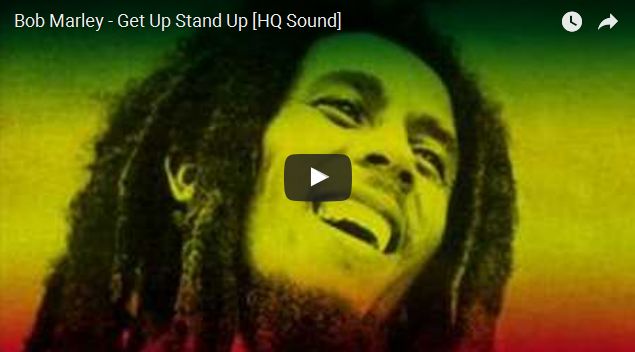 Unfortunate, MacDonald didn’t do herself any favors this morning on Fox.