Had the United States House, Senate, Supreme Court and their staffs been directly affected by the landmark legislation, ObamaCare would have been something entirely different if it was implemented at all, but they basically exempted themselves and mandated the public deal with the monetary ramifications of high premiums, high (thus unusable) deductibles, and non-compliance penalties.

Gutless Republicans now wish to repair a flawed piece of legislation they didn't create, we didn't ask for, and instead of keeping their promises to "repeal" ObamaCare; promises they made as far back as 2010 as a selling point to get the public to put them in control of the House and in 2014 to give them the Senate, they're going to "fix" the unfixable and again make us pay for it.

TOPICS: Government; Health/Medicine; Politics
KEYWORDS: liars2voters; obamacare; republicans; romneycare; trump; trumpcare; wonderful Navigation: use the links below to view more comments.
first 1-20, 21-28 next last
1 posted on 03/09/2017 7:55:10 AM PST by impetrio1
[ Post Reply | Private Reply | View Replies]
To: impetrio1
Gutless Republicans now wish to repair a flawed piece of legislation they didn't create, we didn't ask for, and instead of keeping their promises to "repeal" ObamaCare; promises they made as far back as 2010 as a selling point to get the public to put them in control of the House and in 2014 to give them the Senate, they're going to "fix" the unfixable and again make us pay for it.

The Uniparty likes the federal control of healthcare and will never repeal Obamacare.
Ryancare is a reworking to preserve the structure of federal control.

These gutless RINOs sent full repeals to Obama’s desk knowing full well he’d never sign them, but now we have the POTUS, House and Senate, they won’t go full repeal!

Trump ran on REPEAL/REPLACE, and he had better hold the RINOs feet to the fire on this! For now, I’m giving President Trump the benefit of the doubt.

And then the GOP will own this POS and all of its misery and flaws!

Trump is going to have to reject anything other than a full repeal. This was one pillar of his campaign promises that got him elected!

Fox Business shilling hard for Ryancare this AM.

Yep. And the FAIL of Obamacare is one of the main reason’s these fake conservatives were winning elections and seat after seat all across this country for the last six years.
They don’t get it do they? Or maybe they do. All that money and power that Obamacare hands to pols? They can’t let that go can they?

They ought to make all federal workers subject to Obamacare while they are fixing it. That will make the house and senate move quickly

That is exactly what is happening.

Pretty sure ObamaCare would be fully repealed within 8 days (gotta allow time for representatives and senators to milk it for speeches first.)

Enough is enough, trash it already, move on.

13 posted on 03/09/2017 8:35:52 AM PST by kingu (Everything starts with slashing the size and scope of the federal government.)
[ Post Reply | Private Reply | To 1 | View Replies]
To: Artcore
Trump is going to have to reject anything other than a full repeal

Correct - Trump needs to be reminded that this was one big campaign promise that he has to deliver on.

This has been covered, but either some of you are Democrat operatives or you can’t read.

Feel free to offer up other verbage that the Senate Parliamentarian will accept as properly part of a Reconciliation Bill. I notice none of you have.

Here’s what I do see:

1) What’s wrong with the bill we already passed to kill Obamacare? It passed. It was vetoed.

Answer: The Senate Dems didn’t even bother to filibuster it. They knew Obama would not sign it. But now they will filibuster all such bills so you need 60 votes. Got That? UNDERSTAND? Those bills won’t pass.

2) Then change the Senate rules!!!

3) Why not just DEFUND the damn thing?

Answer: That’s what the proposed plan does. It sets the mandate fine to zero. It zeros the business taxes. Did you not read it?

Answer: Feel free to offer up verbage eliminating illegals from coverage that will get accepted by the Senate Parliamentarian as a proper part of a Reconciliation Bill. You can’t.

does the senate need 60 votes to repeal ?
If so, they will never get a repeal and the way to gut is from the inside out, which is what they are trying to do now.

If they don’t need 60 votes, then shame on them.
The problem becomes political will.
If they repeal and no replace, could the Repubs lose in the 2018 midterm elections and lose the Senate and the House ? They wont take that chance, so no repeal without replace.

Thinking sending the bill that Obama vetoed is the answer? It essentially is the same bill they have going now.

Correct - Trump needs to be reminded that this was one big campaign promise that he has to deliver on.

I’m hoping that there’s some grand strategy in place here that we’re not seeing. Trump cannot possibly believe Ryan wants to work with him!

At this point I’m giving Trump the benefit of the doubt, but the fact that he appears to be working with Ryan, while discounting the concerns of his base and other conservative groups is very unsettling. We’ve been here before!

So far Trump is supporting RINOcare (Repeal In Name Only). Looks like us Cruz supporters got this one right.

You need to do some studying and understand what Reconciliation can and can NOT do.

And you guys need to go back and read the fight from articles of 2010. The Dems HAD THE SAME PROBLEM. Their far left wing base DEMANDED a single payer Canada style national healthcare system.

The Senate Dems would not agree. They would have abandoned it and then the GOP plus those few would have pushed them under 60 votes.

Reid faced THE SAME PRESSURE to just change Senate rules so that everything could happen with 50 votes rather than 60. He didn’t do it. He realized, as you should, that a day will come when you’re in the minority again and will be desperate for the power of the filibuster.

So all he could get thru was Obamacare, rather than a single payer NHS like Canada or England’s plan. His own party in the Senate would not accept more, and even with that he had to contort to use Reconciliation to get it through.

THIS CONSTRAINT WAS NOT INVENTED BY THOSE HORRIBLE GUTLESS RINO REPUBLICANS. Reid and Pelosi and the Dems faced the same constraint. Go back and read what happened in 2010. The same insane rants from the far left wing was happening. They sounded just like y’all sound. 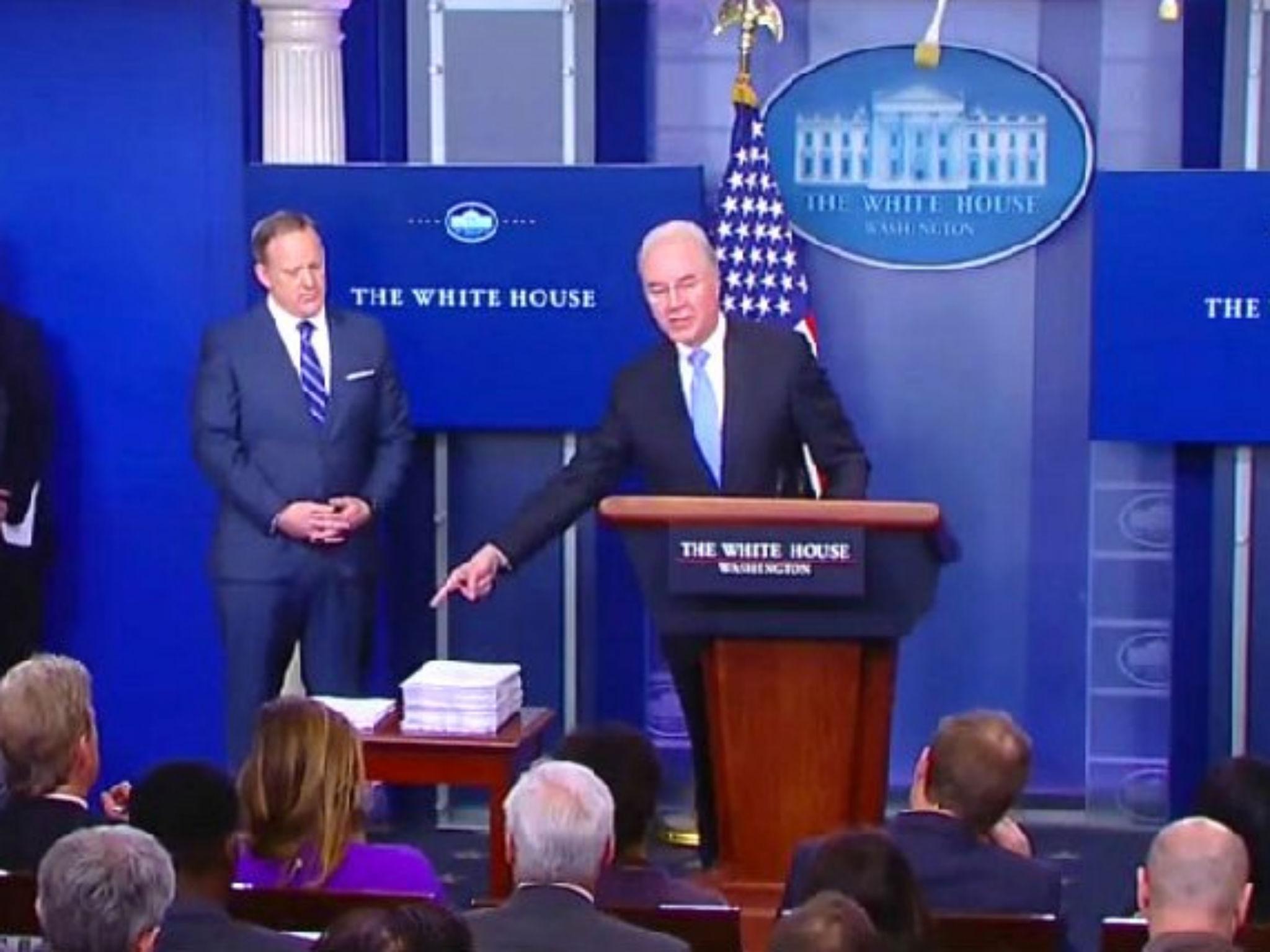 He's making an "argument" that goes like this: See that there big stack? The big awful ACA. And see that little stack? That's our bill.

And you ask, what's that supposed to mean?

Actually, they want to add that little pile to the big pile in three stages...

republicans: “If we just reduce the page count, this baby can fly again.” hat tip: TADSLOS