“When an American president has to issue veiled warnings to Vladimir Putin — say something that Putin should know as second nature — then something terrible has happened. Some upset has occurred. A thing that was previously there to keep the floor level has gone missing.” – Richard Fernandez March, 2014 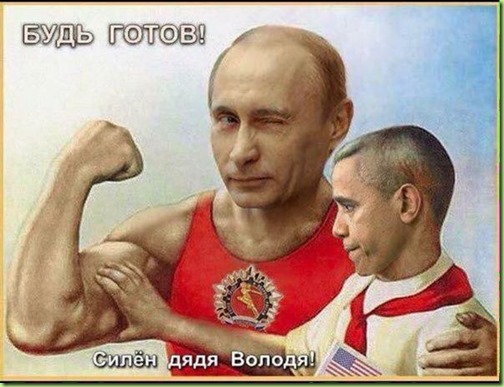 “ Ha ha ha, it’s called ‘muscle’ my little golubushka, I’ll show you how it works if you want.”

So, Barry, are you lying now?

The Obama administration is close to announcing a series of measures to punish Russia for its interference in the 2016 presidential election, including economic sanctions and diplomatic censure, according to U.S. officials.

Or were you lying then?

The Obama administration said it has seen no evidence of hackers tampering with the 2016 presidential election, even as recount proceedings began in Wisconsin.

“The federal government did not observe any increased level of malicious cyber activity aimed at disrupting our electoral process on election day,” the official added. “We believe our elections were free and fair from a cybersecurity perspective.”

“We stand behind our election results, which accurately reflect the will of the American people,” a senior administration official told POLITICO late Friday.

And besides, didn’t our most articulate president ever already handle the sticky wicket created by Russia hacking our election?

Mr. Obama said he was committed to sending the Kremlin a message that “we can do stuff to you,” but without setting off an escalating cyberconflict.

“There have been folks out there who suggest somehow if we went out there and made big announcements and thumped our chests about a bunch of stuff, that somehow it would potentially spook the Russians,” he said. “I think it doesn’t read the thought process in Russia very well.”

Mr. Obama said he told (Putin) “to cut it out, there were going to be serious consequences if he did not.”

It’s not as if we haven’t had harsh words for Putin before, like when he invaded Crimea in 2014; that time we unleashed the officially sanctioned mouthorgan know as the State Department:

Because in Russia All Our Former Peoples Are Belong To Us: (from MOTUS, an unsanctioned State Mouthorgan)

Yesterday (Obama) skipped a meeting of his national security team at the White House to discuss the Russian invasion of Ukraine to work on his fantasy football picks. He was briefed later by Susan Rice, because she’s known for her ability to cut through the facts and present just the simple parts. Then, after they sent Sam Power to the UN to put a scold on Russia, Big Guy called Putin himself.

After 90 minutes of trying unsuccessfully to persuade Pooty to pull his troops out of the Crimea be told him that he was left with no option other than to proceed with the inaction he called for on Friday afternoon. Accordingly, he cancelled plans for planning the Russian-hosted G-8 summit scheduled in June, and Putin hung up on him. So, rude letter to follow.

Alrighty then, sanctions it will be: because they

“make a very strong statement in a way that is less drastic than bombing a country and more impactful than sending out a cable from the State Department.”

We all know how Barry feels about bombs and if there’s one thing No-Drama-Obama is known for it’s being less drastic. 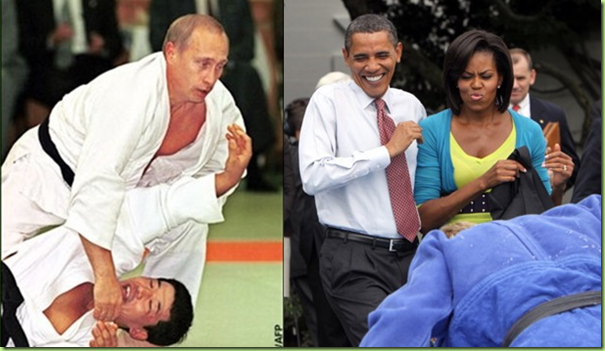 Because some dictators dictate with their pen and phone;

while others prefer a more tried and true dictatorial weapon. 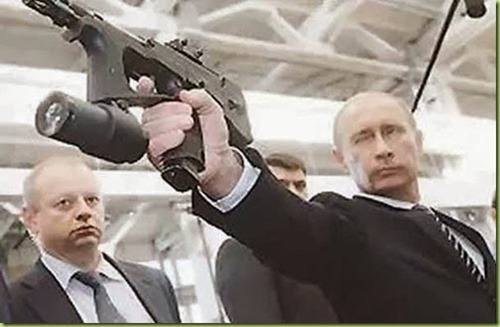 Butt now that Trump’s taking over, maybe we can get back on the right track. And apparently Putin hopes so too:

President-elect Donald Trump on Friday shared a letter he received from Russian President Vladimir Putin, who urged the next president "to take real steps to restore the framework of bilateral cooperation" while offering Trump his "warmest Christmas and New Year greetings."

"I hope that after you assume the position of the President of the United States of America, we will be able -- by acting in a constructive and pragmatic manner -- to take real steps to restore the framework of bilateral cooperation in different areas as well as bring our level of collaboration on the international scene to a qualitatively new level." 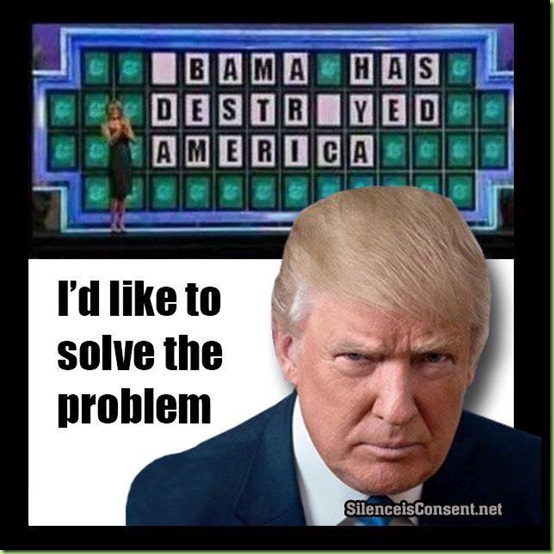 Make America Great Again and the rest of the world will follow suit.

Good writeup. I’d almost forgotten that twit, Psaki. And that last pic says it all.

We are about to witness sheer genius in the WH. This will be a refreshing change from the glib doltery of the past.

Just an aside, but I found that Putin pic interesting; holding the weapon in his right hand, but aiming using his left eye?

Do you notice that Putin shooting right-handed, but his left eye is dominant?

I have that problem, too.

Make America Great Again and the rest of the world will follow suit.

That’s the way it used to be and it created the greatest number of free people the world had ever seen. Too bad most of them never got it quite right and we veered away from it.

Putin knows which of his eyes is dominate. All sharpshooters do.

I see it regularly while teaching rifle marksmanship. You can get away with it in pistol, but in rifle, we cover the eye.

Right...Obumbo is going to squat in a corner and wet his pink panties. Pathetic fool!!