Unfortunately rather than following Breitbart’s recommendations, RINOs have instead adopted one of the most annoying tactics of the Progressive Left: virtue signaling. Except in RINO-World it’s used to discredit one of their own rather than the enemy – a unique play that generally allows the other team to score while you are still posturing and preening.

In case you don’t remember exactly how virtue signaling works here’s a good explanation from Acculturated: it is the popular modern habit of indicating that one has virtue merely by expressing disgust or favor for certain political ideas, cultural happenings, or even the weather. I would add “without having to do anything else.”

Case in point, Republicans stepping up to the mic to disavow Donald Trump: 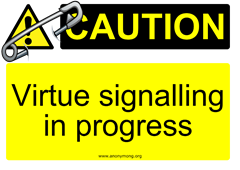 Enough! Donald Trump should not be President. He should withdraw.
As a Republican, I hope to support someone who has the dignity and stature to run for the highest office in the greatest democracy on earth. - Condi Rice


“Cindy and I will not vote for Donald Trump,” - John McCain

“However, I’m a mom and an American first, and I cannot and will not support a candidate for president who brags about degrading and assaulting women.” - Senator Kelly Ayotte

Sorry, butt I remain firmly on the Trump-mobile even though he can be a jackass. Butt he’s our jackass. And remember, one strong man with the jaw of a jackass can slay 1000 Philistines.

And Samson said, With the jawbone of an ass, heaps upon heaps, with the jaw of an ass have I slain a thousand men.- Judges 15:16 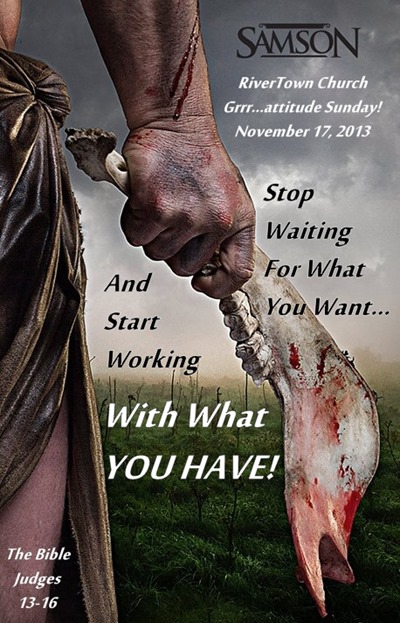 And that’s your Sunday morning Bible lesson from MOTUS.

Funny isn’t it, how Democrats rally around their candidates, and RINOS cut and run???

The jawbone of a jackass... that would be a great symbol for this race

3 posted on 10/09/2016 6:52:01 AM PDT by Mr. K (Trump is running against EVERYONE. The Democrats, The Media, and the establishment GOP)
[ Post Reply | Private Reply | To 1 | View Replies]
To: NOBO2012
Here's my take on what Donald Trump said over a decade ago- I heard that kind of talk back in the locker room when I was playing for the Meridian Wildcats, who went 23-1 my last two years there and won two State Championships. I heard this kind of talk working offshore for Mobil Oil and Zapata Offshore Drilling in the early to mid-1980's. I heard this kind of talk (from BOTH sexes) in Army Basic Training, AIT, and serving with the 168 Eng. Gp. in Vicksburg.....

....and it's still disgusting. The Lord tells us that if we look at another person in lust, it's as if we're having sex with them. Objectifying people for, what's in essence, glorified Aerobics, harms our souls. We are to look at each person as someone for whom Jesus Christ suffered a painful and humiliating death on the Cross. Anyone whose mind is on the things of this World (including having extramarital sex) can not have their mind on Jesus' Great Command, which is to bring the world to Him and make Disciples of men and women. Does what Donald Trump said over a decade ago disqualify him from running for President? Of course not. He claims to be a Sinner saved by Grace and whether he's sincere or not remains to be seen.

Hillary claims to be Christian as well. Hillary also has a record of saying disgusting things about blacks, Jewish people, Mentally challenged people, and women who, voluntary or involuntary, had sexual relations with her husband Bill Clinton.

LIke Donald Trump's statements over a decade ago, Hillary's statements and actions were a long time ago as well. So, let's see what they've done recently-

Donald Trump has opened Hotels, Gold Courses and Country Clubs who accept all people regardless of race, color, religion, or sexual orientation, and multi-billion dollar buildings. He's lost Billions- but gained it back (just like other venture capitalists of this era). He was against the Iraq War before it began, but believes that if we break it we buy it, and should've stayed longer to ensure the stability of the country. He's run a Presidential Campaign on a shoestring budget, being outspent by his Republican opponents 5 to 10-fold, yet easily won the nomination. On the negative side, he's rude, crude, doesn't have a filter, says what's on his mind, has been a philanderer in his past, and once said disparaging words about women over a decade ago.

Hillary has served as Secretary of State. During that time, we've seen the rise of ISIS, the fall of Moammar Qaddafi of Libya and Hosni Mubarak, both strong men stabilizing against al-Queda. She botched the "reset" of relations with Russia, turning a potential ally Vladimir Putin into an adversary against whom we might be going to war soon. She left the Libyan embassy defenseless against Muslim terrorists, refusing to strengthen the defenses or send in the Marines to rescue them, leading to four men being murdered by Muslim terrorists. It would've been an Alamo-type slaughter if it weren't for former Navy SEALS Tyrone Woods and Glen Doherty, who gave their lives providing cover for the Embassy Staff to reach forces loyal to former President Qaddafi and safety. Then, she blamed the attack on an obscure video produced in California and lied to the families of the men slaughtered in Benghazi. On the positive side, she's been a public figure for over 40 years.

Yes but of course most of those involved WANT a Hillary victory, they want more illegal immigration, and to turn America into a Muslim country. We have been sold to the highest bidders.

Democrats are tribal, republicans are cannibals.

The tribe bans together, cannibals eat each other into extinction.

Until the cannibals change their diet from each other, to the other tribes, they are headed for extinction.

It is not virtue signalling. It is vaginizing.

What we saw in the Trump thing, is exactly what men are when not in the presence of women.

McInsane and ANY Republican candidate that states they will not vote for the Republican presidential candidate, or harms the party in any way, should be tossed out of it!

This is what they do. It is their natural instinct regardless of the perceived enemy. They are physical and moral cowards. Vichy...

In a war, a determined soldier, through extraordinary valor and courage, and commitment to a cause, can defeat 10 enemy soldiers who are less motivated or less committed.

In an election, each person gets one vote. It does not matter how committed one is to the cause. In elections, unlike in wars, it is strictly a numbers game.

I was raised in a Protestant/Catholic family and all the women of my generation were "nice" and avoided smutty people, language and situations. But we also, in late adolescence and early adulthood, were forced to live through the marxist/feminist Sexual Revolution imposed within our culture, which hit the nation like a tidal wave of filth.

It pains me to remember that as mothers of sons, several of us women in the older generation of my family were shocked to witness the AGGRESSIVE, SEXUALIZED BEHAVIOR OF TEENAGE GIRLS towards our sons. We literally had to fend them off so our sons could get through high school and college without being seduced into a degrading lifestyle of slavery to a baby mama. Our generation's women threw more than one girl out of the house for sneaking in after hours or sending salacious social media messages to our high school boys.

What Ms Ayotte appears to take for granted is that her little girl snowflakes are telling her the truth and are pure as the driven snow. She seems oblivious that the women Trump hit on were most probably openly throwing themselves at him, arching their backs and exposing their breasts to try to "score" at least some sexual attention from him, and giving him body-language invitations to behave salaciously.

The very fact that he said that being a star meant women "let" him do things indicates that he was most definitely not "assaulting" them. He also, in talking trash that actress, said he tried hard to get at her but she said no. Quite obviously, he was admitting to Billy Bush that he did not assault or rape her in order to have his way with her. At least as far as that leaked conversation goes, it sounded like physical horseplay among people who quite frankly use their sexual attractiveness as bargaining tools in a high-stakes game of flirtation. They win some, they lose some, and both go away with varying degrees of emotional or physical trophies.

Most of us ordinary deplorables find this behavior either inherently distasteful or out of our league. If we are religious, obviously it is a mortal risk. If we are not, most of us lack the money, power and opportunity to attempt to fix what this type of behavior can break. But it's qualitatively and quantitatively different from predator/victim or abuse-of-power behavior such as that of which Bill Clinton has been accused.