Well, if she’s going to lose she’ll have to do it on her own. Like every other narcissist it appears that Julian Assange doesn’t really have all that many arrows in his quiver. The Wikileaks “leak” was just another Kardashian Kaper.

and fake polls fakes, she could lose.

Although the actual Monmouth Pollsters claim it’s a fake, I still have my doubts. Like Harry Reid’s unsubstantiated claim that Romney paid no taxes for 10 years, or the NYT claim that Trump paid none for 20 years, if you want to believe it, it’s true.

And let’s be fair, Hillary is perfectly capable of losing on her own. Take yesterday for instance, where, speaking about Trump, she told a crowd in Toledo that she doesn’t see “how anybody can lose a dollar, let alone a billion dollars.” Apparently she’s forgotten about that $6 billion that went missing from the State Department while she was at the helm for 4 years; 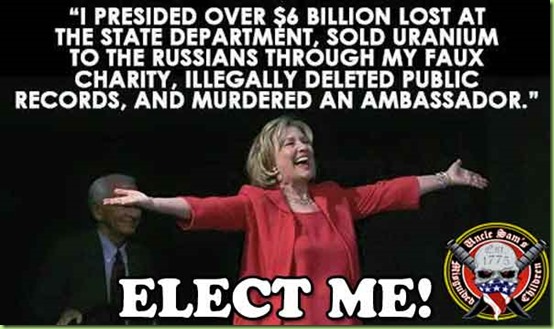 if I’ve done the math correctly that works out to $1.5 billion a year. At least Trump lost his own money.

And if she can’t somehow manage to lose on her own she’s still got old passive-aggressive Bill to help out. Here he is, reminding all potential Hillary voters just how stupidly wrong-headed the Democrat plans have been over the past 8 years:

“You’ve got this crazy system where all of a sudden 25 million more people have health care and then the people are out there busting it… wind up with their premiums doubled and their coverage cut in half.”

Where the heck was Bill back in 2010 when this sort of insight might have actually been influential instead of just obvious?

Should Hillary somehow manage to lose despite all the little boosts she’s getting along the way don’t expect her to simply fade away into the background. Convinced she was named after Sir Edmund Hillary for a reason, she will continue to pursue the Presidency until she’s dead. And she’s never going to die. 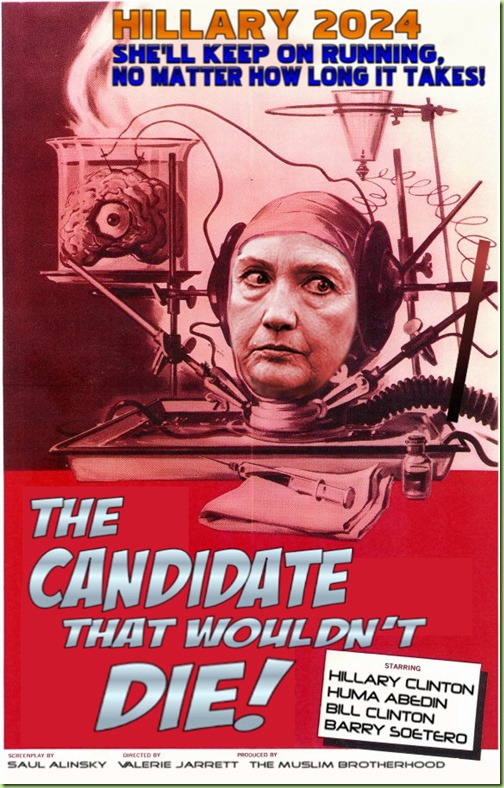 If elected, she will die during her first term. She’s ill.

If not elected, she will die even sooner. The drive to be the first female president is the only thing that keeps her going.

2 posted on 10/04/2016 5:39:53 AM PDT by ClearCase_guy (Abortion is what slavery was: immoral but not illegal. Not yet.)
[ Post Reply | Private Reply | To 1 | View Replies]
To: NOBO2012
Wow. The link displays an image of a memo to Patrick Murray from someone - presumably a sponsor - giving precise instructions to Mr. Murray as to what results the Democrats/Hillary Campaign require from future polling.

In that memo are precise instructions for skewing samples and results for publication.

If legit, it should destroy the reputation and credibility of the Monmouth University polling operation. Of course it won't.

Patrick Murray is the director of the Monmouth University Poll. He appears to be a de facto contract employee of the Democrat party.

3 posted on 10/04/2016 5:49:42 AM PDT by Steely Tom (Vote GOP: A Slower Handbasket)
[ Post Reply | Private Reply | To 1 | View Replies]
To: All
BILL CLINTON ON OBAMACARE: “You’ve got this crazy system where all of a sudden 25 million more people have health care and then the people are out there busting it 24/7...... wind up with their premiums doubled and their coverage cut in half.”

This so calculated....like everything the conniving Clintons do.

Billy mentioning the "struggling middle class" is also a clue to Hillary's campaign strategy.......when Bill Clinton ran, he calculatedly made moves to make himself attractive to the middle class.

Hillary knows she is not very appealing and at the same time she has to keep Obama stroked.

Obama setup a costly voter fraud machine for her (using our tax dollars), got her cleared of the email mess......and then there's the crucial Obama coalition votes she desperately needs.

After all that largesse, Hillary can't appear to be throwing Obama under the bus....that's where Bill comes in.

The Clintons could care less about the middle-class or about skyrocketing health premiums.......they're in this strictly for themselves.

So many polls, so many contradictions, so little reason to believe any of them, so you can believe the one you want to believe.

Wasn’t it Farage who said that pollsters aren’t reaching any of the voters who will decide this election?

Pass the popcorn. Best. Election. Ever.

Well we all know two people whose premiums weren’t at all affected!

Silly taxpayers, WE PAY FOR THEIR HEALTH CARE.

Why? Can’t former Presidents and their families afford their own, especially after selling STATE SECRETS? New legislation, please, Congress!!

Note the use of the f -word in that memo.

It may be fake.