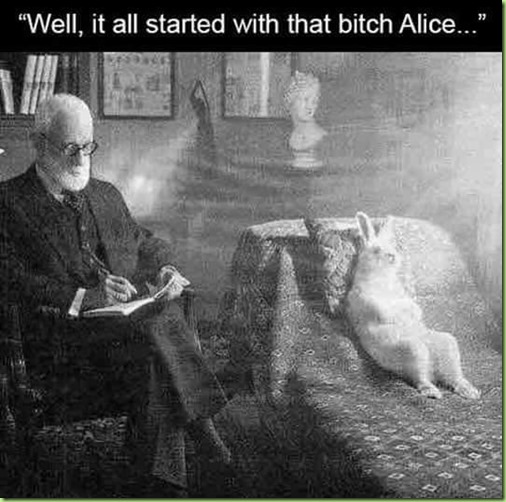 Roger Simon had an interesting post this week titled Are We Now or Have We Ever Been... a Democracy? In it he attempts to explains the RNC’s Byzantine rules for their National Convention this July.

“But then, as I understand it, you can still vote for them (Kasich, Ryan, etc.) even if they're not placed in nomination (go figure) and more importantly and most obviously, rules are made to be broken -- or, if not broken, rewritten.

So let’s just cut to the quick okay? The only rule they have is that there are no rules and even that can change. 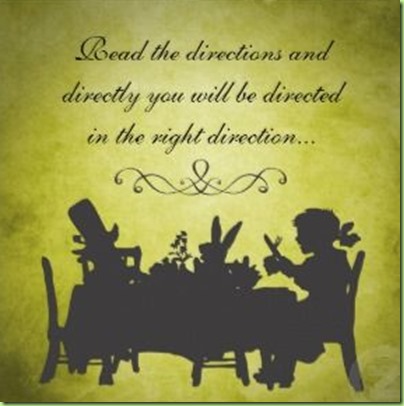 “Plenty of opportunities for the Republican delegates to vote themselves silly to find their favorite candidate.” 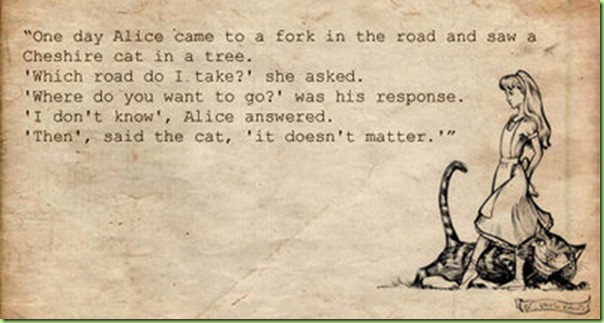 “But would that be democratic? By then, the primaries and their humble voters would be far in the rear view mirror, a distant memory of one man, one woman, one vote.” 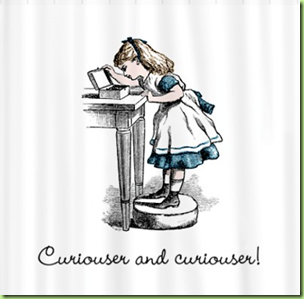 “But whatever the Republicans do, when it comes to being anti-democratic, they can't hold a candle to the ironically named Democrats whose convention will be manipulated by the Super Delegates. The "super people" -- straight out of the backroom party bosses of Mr. Smith Goes to Washington -- are so super important and powerful Hillary Clinton can lose to Bernie Sanders in New York and practically every other state from here on in by landslides and Her Chappaquaness still gets the Democratic Party nomination.” 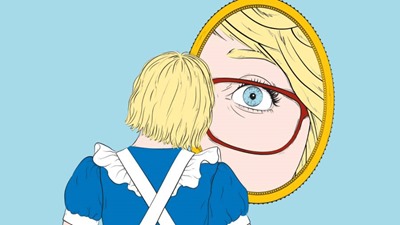 “Going further the lawyer averred that the convention, in his view, was too early and didn't give the warring sides sufficient time to come to terms, i.e. calm down.” 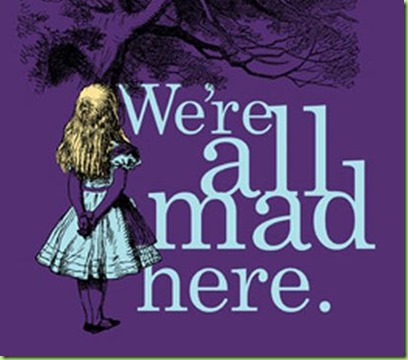 And so we find ourselves, again, at that fork in the road. 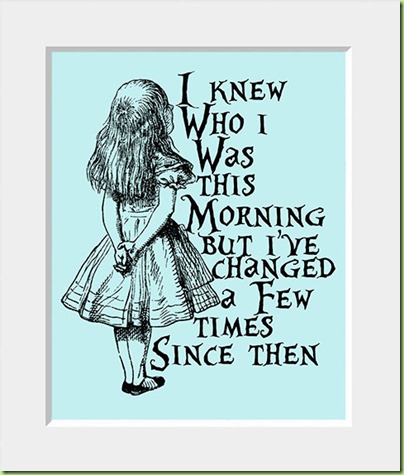 And again it’s hard to decide which way to go. Especially if it doesn’t matter. It’s enough to drive you mad. 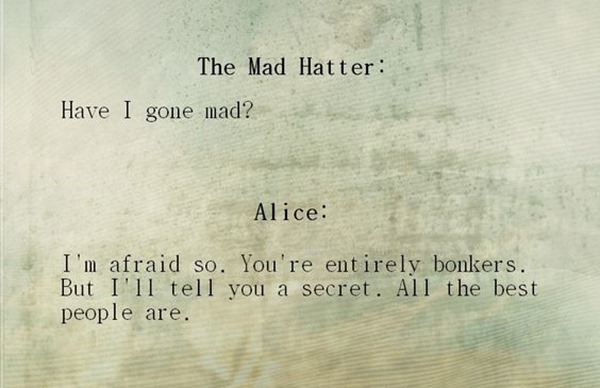 I would suggest just one rule that each party adopt for their convention. It might not get us out of the rabbit hole butt it might prevent us from falling any further: 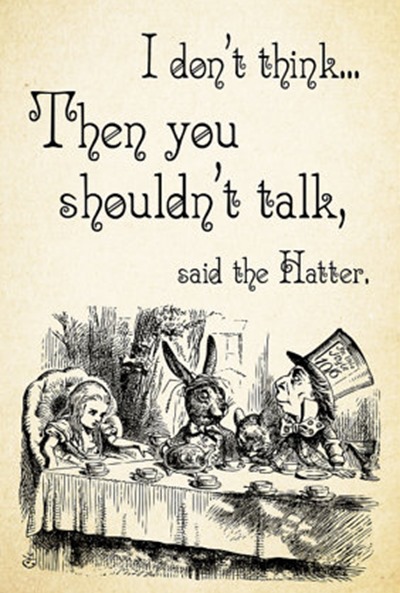 Simple, no? No Thinky, No Talkie. Capiche? 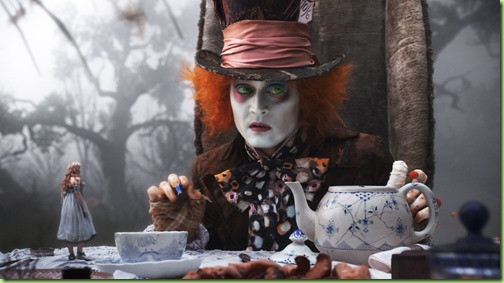 Perhaps I could have handled that whole Tea Party thing a little better.

We are supposed to be a constitutional republic, meaning that we are represented by people who have been elected by us. The problem comes when they no longer represent us.

“A democracy is nothing more than mob rule, where fifty-one percent of the people may take away the rights of the other forty-nine.” Thomas Jefferson

“Remember, democracy never lasts long. It soon wastes, exhausts, and murders itself. There never was a democracy yet that did not commit suicide.” John Adams

This is not a Democracy. It’s a Republic.

Nathaniel Chipman, Sketches of the Principles of Government 177--82

Of the Nature of Equality in Republics.

Some of the most eminent writers on government, have supposed an equality of property, as well as of rights to be necessary in a republic. They have, therefore, prescribed limits to individual acquisition. The Reason given is, that riches give power to those who possess them, and that those who possess power, will always abuse it to the oppression of others. If this be a good reason for limiting the acquisition of riches, there is equal reason for limiting the improvement of bodily strength and mental abilities. Such a step would be an abridgement of the primary rights of man, and counteract almost all the laws of his nature. It would, perhaps, could it be reduced to practice, place the whole human race in a state of fearless quietude; but it would be a state of tasteless enjoyment, of stupid inactivity, not to be envied by the lowest tribes of the animal creation.

We have just now enquired into the nature of equality among men, and have seen in what it consists; a free and equal enjoyment of the primary rights, which are, the intellectual rights, and the right which men have of using their powers and faculties, under certain reciprocal modifications, for their own convenience and happiness. The equality necessary in a republic, requires nothing more, than this equality of primary rights. I shall here instance in the right of acquisition only, as being sufficient for my present purpose.

To the security of this right, certain regulations, as to the modes and conditions of enjoying the secondary rights, or in other words, of holding property, are necessary. Not, indeed, as to the quantity, but the freedom of acquisition, use, and disposal. To give to any individual, or class of men, a monopoly, an exclusive right of acquisition in those things, which nature has made the subjects of property, to perpetuate, and render them unalienable in their hands, is an exclusion of the rights of others. It is a violation of the equal rights of man. Of this nature are all exclusive privileges; all perpetuities of riches and honor, and all the pretended rights of primogeniture. Inequality of property, in the possession of individuals, is not directly, nor by inevitable consequence, subversive of genuine liberty. Those laws are, indeed, subversive of liberty, which, by establishing perpetuities, deprive the owner of a right of disposal, and others, so far as they extend, of the right of acquisition; which annex privileges to property, and by making it a qualification in government, create a powerful aristocracy.

Riches are the fruit of industry. Honor the fruit of merit. Both ought, as to their continuance, and the influence which attends them, to be left to the conduct of the possessor. If a man, who, by industry and economy, has acquired riches, become indolent, or profligate, let him sink into poverty. Let those who are still industrious and economical, succeed to his enjoyments, as to their just reward. If a man, who, by noble and virtuous actions, has acquired honor, the esteem of mankind, will behave infamously, let him sink into contempt. To exclude the meritorious from riches and honors, and to perpetuate either to the undeserving, are equally injurious to the rights of man in society. In both it is to counteract the laws of nature, which have, by the connection of cause and effect, annexed the proper rewards and punishments to the actions of men. Wealth, or at least, a competency, is the reward, provided by the laws of nature, for prudent industry; want, the punishment of idleness and profligacy.

If we make equality of property necessary in a society, we must employ force, against both the industrious and the indolent. On the one hand, the industrious must be restrained, from every exertion, which may exceed the power, or inclination of common capacities; on the other hand, the indolent must be forcibly stimulated to common exertions. This would be acting the fable of Procrustes, who, by stretching, or lopping to his iron bedstead, would reduce every man to his own standard length.

If this method should be deemed ineligible, the only alternative will be, either by open violence, or the secret fraud of the law, to turn a certain portion of the well-earned acquisitions of the vigilant and industrious, to the use of the indolent and neglectful.

Let us not, in a Republic, attempt the extreme of equality: It verges on the extreme of tyranny. Guarantee to every man, the full enjoyment of his natural rights. Banish all exclusive privileges; all perpetuities of riches and honors. Leave free the acquisition and disposal of property to supply the occasions of the owner, and to answer all claims of right, both of the society, and of individuals. To give a stimulus to industry, to provide solace and assistance, in the last helpless stages of life, and a reward for the attentions of humanity, confirm to the owner the power of directing, who shall succeed to his right of property after his death; but let it be without any limitation, or restraint upon the future use, or disposal. Divert not the consequences of actions, as to the individual actors, from their proper course. Let no preference be given to any one in government, but what his conduct can secure, from the sentiments of his fellow citizens. Of property, left to the disposal of the law, let a descent from parents to children, in equal portions, be held a sacred principle of the constitution. Secure but these, and every thing will flow in the channel intended by nature. The operation of the equal laws of nature, tend to exclude, or correct every dangerous excess.

Thus industry will be excited; arts will flourish, and virtuous conduct meet its just reward, the esteem and confidence of mankind. Am I deceived? or are these the true principles of equality in a democratic republic? Principles, which will secure its prosperity, and, if any thing in this stage of existence can be durable, its perpetual duration.

http://press-pubs.uchicago.edu/founders/documents/v1ch15s51.html
The University of Chicago Press

Knew I could count on the republic not a democracy crowd. Apparently nobody even read the article. There is a ton of truth in it.

Everyone here knows we are a republic, however, I am tired of hearing that as an explanation for governing against the will of the vast majority of the nation. Every time the public at large expresses an opinion, we are solemnly told by some sniffing a-hole, “but then you must remember....this is a republic”.

The phrase has turned into a tool of sophistry to explain to the majority while they will be ignored yet again and why they will never have control over the direction of the nation.

The republic was expressly designed to **do the will of the people**, as expressed in elections, while maintaining a framework to ensure the individual was protected from unjust mass will. A republic was not a tool for an oligarchy to flip the finger to the masses and freely ignore them.

Yes, we all know its a republic. But a few here and in our government needs to re-examine what that really means.

SCOTUS enshrines the problem with democracy. It is the goto example of why democracy is not great.

The main argument here is not a democracy versus a republic. What’s being objected to here is one of the last vestiges of state sovereignty, and I don’t see a proposal for a Constitutional amendment.

It's not a republic. It's a Constitutional Republic.

That statement is true but inadequate.

We are a Republic because America's founder wrote these words in the Constitution.

Article 1, Section. 4. The United States shall guarantee to every State in this Union a Republican Form of Government, and shall protect each of them against Invasion; and on Application of the Legislature, or of the Executive (when the Legislature cannot be convened), against domestic Violence.

To put the importance of that guarantee into its proper perspective The People’s Republic of China is a Republic with a Communist government.

The two “major” political parties are not representative institutions.

As I said, the problem comes when they no longer represent us.