Normally the last thing on earth I have time or inclination to do is watch Fox News in the afternoon. Butt since Raj is immobile these days he happened to be watching yesterday as this news allegory played out. He then backed it up and insisted I watch the entire 30 minute segment. It was painful so I’ll summarize for you. (all times are approximate) 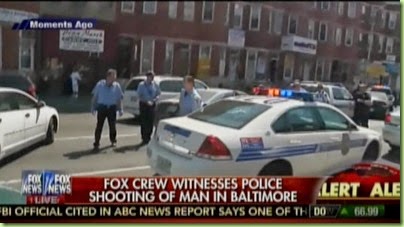 2:45 pm: Mike Tobin on site near Pennsylvania and North Avenues in Baltimore calls into Fox News with breaking news about a shooting in Baltimore that he was eye witness to and reports “as he was running away, that police officer drew his weapon and fired and struck the individual who was running away.”

3:01 pm: Tobin reports to Shepard Smith that he witnessed this go down as it happened about 40 yards from the car he was sitting in, preparing for his next “on air” report. He further reports that he didn’t actually see the man’s wound but reported the young victim looked to be “in bad shape.”

3:15 pm:  Shep goes to Leland Vittert on scene who is now interviewing Tiffany, a young black woman who was an eye witness to the shooting. 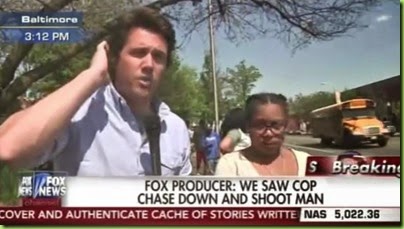 In the course of interviewing the distraught Tiffany, Leland asks her to relate what she saw as the police “shot and killed” the young man. Hearing for the first time that the “boy” was dead, Tiffany begins to grow hysterical. She gives a chilling report of how she just saw a policeman chase down and shoot an unarmed black boy in the back.

“Police just got out of the car and started chasing the boy,” the woman recalled. “And then he ran down towards the Metro PCS, the officer got in the middle of the street and he shot that boy in his back in my face.”

The woman also said the man was unarmed and she wouldn’t believe anything police said about the incident.

“This is what they are going to say,” she said, adding that she “watched it with my own eyes.”

3:20 pm: Back to Mike Tobin who now reports to Shep that he had only heard a single gunshot, and did not actually see anyone fire a weapon. There was a row of parked cars between him and the scene, he admitted. Butt there was a revolver on the ground.

3:23 pm: Baltimore police report there was no shooting.

Apparently the young man’s gun went off when he dropped it and he was taken to the hospital out of “an abundance of caution” – because, you know, they didn’t take Freddie to the hospital in time. Turns out there was nothing wrong with the young black boy arrested for having a handgun that he may or may not have been brandishing at the time of his arrest.

Wait, what? No shooting? Butt we just heard about it on Fox News. They’re the good guys in this news racket, right? Right!?! 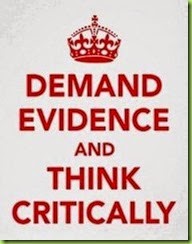 And what about “they would not, and could not, say it if it wasn’t true”? That only applies to important things, like advertising, not news and politics. So you can be certain of only one constant; the carnival of errors will continue… 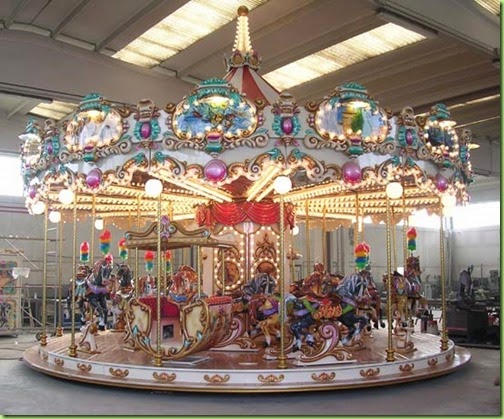 And as Calvin discovered to his great disappointment, it doesn’t even apply in advertising. Or Obamacare:

Rude girls in short skirts punctuated by long comments from Karl Rove, Juan Williams, and assorted homos seems to be a working formula for Fox.

LOL Although the gals have brains, and most are fairly conservative. Now that I think about it, there are more looney men, like Jerry Rivers and Shep, than looney women.

So, it turns out not to be true and the fairy at FOX said so, explained how it all came about and apologized

Why is FOX being castigated by FReepers ?

Fox is a cartoon show with nice looking gals.

Apparently because subsequent events seem to have completely refuted that black girl’s claim and SS and Fox aired it all like it was verified fact.

Would you at least said something like “I personally, nor my reporter has seen or verified this? See my earlier post re: South Park “We’re reporting....”

I’d say because one of their reporters, who supposedly was hired to actually REPORT WHAT HE SAW, made a claim that he saw an officer shoot a person, and later had to admit that he wasn’t in a position to see anything, he just heard something.

That person should be suspended for a week without pay. He failed at a basic part of his job. He incited people, and he made his network look like idiots.

I think a suspension for Shep for saying the boy was killed might also be a good thing, but anything that got Shep off the air would be a good thing apparently.

Oops, sorry — it was VItland who said the boy was killed, not Shep. I guess Shep was OK this time.

TV promotes the leftist agenda. The only way you can do that is by lying.

12 posted on 05/05/2015 9:23:28 AM PDT by I want the USA back (Media: completely irresponsible. Complicit in the destruction of this country.)
[ Post Reply | Private Reply | To 1 | View Replies]
To: NOBO2012
I remember some decades ago when ABC anchor i.e. newsreader Frank Reynolds became very upset on air when he had to retract a story he had just broadcast shortly before.

I think FOX news with that great... uh... semi-competent newsreader Shep Smith should be more careful.

A lot of people on this site don’t seem to think for themselves. They post these articles for no other reason than they need to be angry about something. True this reporter was an idiot, but if it were me the same thing could have easily happened. He jumped in without any facts because in this day and age that is the only kind of reporting there is. Broadcast first, get the facts sorted out later. Some of the posts written on freerepublic.com are done in the same fashion. Someone will hear something that they heard from a friend who heard it at the barber shop and they hop on their keyboard and post something that is not accurate.

Why doesn’t Fox News play the video of Freddie Gray standing straight up and turning around right before he gets in the van? They cut it right before he does just like all the other networks.

NOT! TV is STRAIGHT where I go for ALL my laughably contrived fictional account of events, self-conscious, Hollywood wannabe’s spewing THEIR opinions, BS, biased and criminally inaccurate news!

That is ALL TV news has been for decades!!

The net made TV news one step away from glossy, melodramatic and farcical entertainment, decades ago!!

And here I thought I was the only one who noticed this.

How easy do you suppose it would be to spoof a shooting in Balto?

Stage your people just around the corner from where news crews are set up; check closely to make sure that no real po-po are around; have your white actor in a po-po outfit chase then shoot (with blanks) your young black actor.

Then have your ambulance arrive; load the black “victim” and race off. Have your fake po-po cruiser pick up your white actor and disappear.

If your white actor doesn’t get ventilated by locals, count on the riot starting within 10 minutes. Count on the “news” reports of eye witnesses going on the air in half that.