I know there has been much discussion here and elsewhere regarding Big Guy demeaning the office of the Presidency by agreeing to an interview with green-lipped GloZell Green. Butt just because she eats Fruit Loops out of a bathtub, don’t be so hasty in your judgment. Did I not tell you that GloZell is a national treasure? I suspect several of you did not believe me. 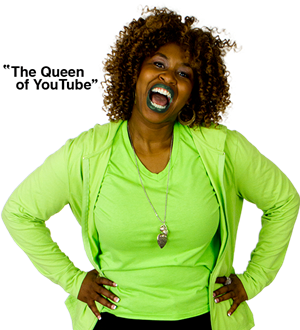 Allow me to present my case, which will require you to review an actual clip from her interview with Big Guy, butt do it with this in mind: GloZell, the crazy YouTube vlogger who will do practically anything, may have actually gone rogue on the Prezzy. And I’m not the only one who thinks so; NewsBusters also speculates that GloZell might have punked the Punk-in-Chief too.

As you watch, note at the beginning where she tells Big Guy that she has 3 family members in law enforcement, and her husband is a retired Air Force veteran. Hmmm, that should be considered fair warning. Next she tells him that she’s cut all the hoods off her husband’s hoodies so he won’t get shot by the “Po-Pos” and then asks BO what can we do about this black guy/white cop situation:

Not knowing exactly how to play her game Big Guy goes all serious and drones on endlessly, at one point offering this insightful advice as to what white police officers should ask themselves before pulling someone over:

“Am I stopping this person because I should be stopping them, or is there some bias at work?”

Hee. Maybe we should draw up a flowchart for cops to consult before they stop someone for running a stop sign: “Is the perp white? Yes? Okay to stop. Are they Black? Check your white privilege.”

I think the point goes to GloZell in that round.

Perhaps Big Guy’s little people should have actually screened the content of some of GloZell’s greatest YouTube hits before booking her. Here, for example, she lampoons people for idolizing Oprah and Obama just “becuz they black…they black, they black!”

And then there’s this video, featured here a long time ago: “Thanks for paying for my ObamaCare…shouldn’t you be at work?”

And then she takes her interview up a canal that few in the MSM would dare dip their oar; she asks BO about…Cuba. After pointing out that she was raised in Florida and has many friends whose families escaped from Castro – who, she reminded him, put the “dick” in dictator – asks essentially “what were you thinking?”

Although she’s better known for her “My push-up bra will help me get my man,” “Ghetto Hunger Games” and ”Cinnamon Challenge” videos, GloZell makes a pretty good provocateur. And she may have just conducted the first undetected drone attack inside the White House – all while getting BO to discuss cyber security with her!

So let’s hear it for GloZell: she’s not your ordinary video fool, she just plays one on the internet. 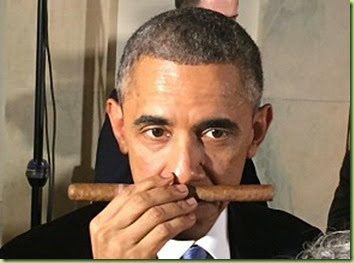 There’s a lot of “butt”s in there where they don’t belong.

I sure wish the author would learn the difference between “butt” and “but”. I have noticed this before.

Watching a video, you do get the sense that perhaps GloZell is actually Paula Prius under deep cover. Drawing them in with over the top mockery misinterpreted as sistahood.

It is intentional. Look at the title of the blog.

I remember GloZell because of that video she made where she goes on and on about Obama and how great he is going to be and how she voted for him because he were black, and that’s the only reason she voted for him, and that was enough for her, and how he was going to pay for her food and her kids and her house and her cable, and then when someone off-camera tells her he’s not going to do those things, she says “is it too late to vote for the white guy?”

I have watched a few GloZell videos since 2008 and I know she’s spoofing people. I was shocked when Obama chose her for an interview. I guess like most things American, he and his flunkies just do not get it.

Typically long-winded, narcissistic, delusional, and self-aggrandizing carpalia from the post tuttle in chief.

It’s done on purpose. I’ve read the blog since it started and it’s a reference to the wide load sign the Mooch needs for her backside.

11 posted on 01/26/2015 9:02:43 AM PST by leapfrog0202 ("the American presidency is not supposed to be a journey of personal discovery" Sarah Palin)
[ Post Reply | Private Reply | To 4 | View Replies]
To: NOBO2012
And I’m not the only one who thinks so; NewsBusters also speculates that GloZell might have punked the Punk-in-Chief too.

One of the best articles I have ever read even though I have no idea who that NewsBusters guy is.