Well that was a spectacle to end all; words fail me. Butt not Big Guy, his words – and he had plenty of them – shined like a million points of spite.

I was up all night trying to figure out how best to summarize the SOTU for those of you who were too busy to watch it for yourself. Succinctly: it was 50 pounds of bullshit crammed into a 1 pound doggie poo bag. 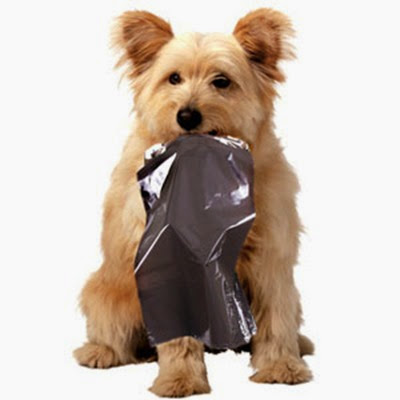 Butt before getting into any of the insignificant points of the speech allow me to comment on a couple of the more superficial aspects of the evening: First, I noticed that Big Guy decided to go with the full-metal gray hair for his Big Read. I believe it added gravitas: 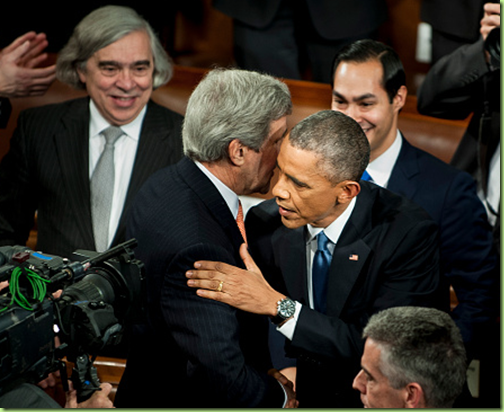 Second, it looked like the dressers got Lady M’s and Dr. Jilly’s frocks mixed up: 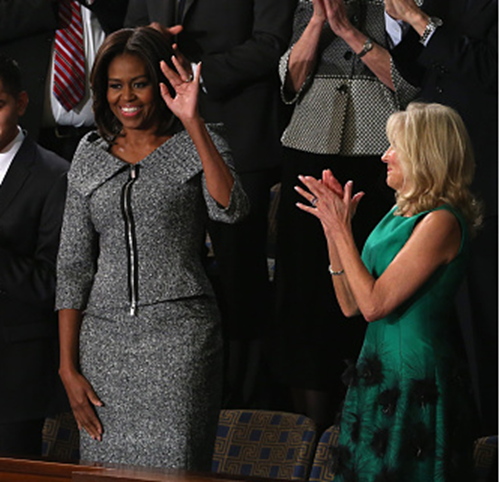 And now, on to the more substantive stuff. It struck me that only a complete narcissist would take a victory lap after his team came in last; and wink at you as he does so. 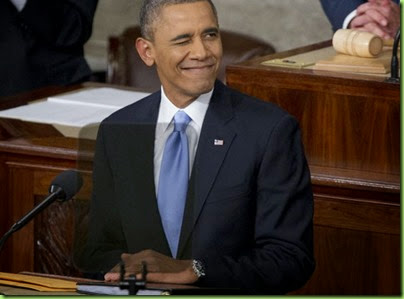 Next, if you’re going to pat yourself on the back for having done such a bang up job on the economy you probably shouldn’t turn around and whine about an "economy where only a few of us do spectacularly well"  - as if your policies have nothing to do with the lowest labor participation rate since Jimmy Carter, 30 hour work weeks, wage stagnation and under reported inflation.

Then Big Guy laid out some newly discovered constitutional rights –  free child care, paid sick leave, increased minimum wage, and free community college tuition - that he wants the “few of us who are doing spectacularly well” to pay for.

And he highlighted several things he’ll veto in the wink of an eye: 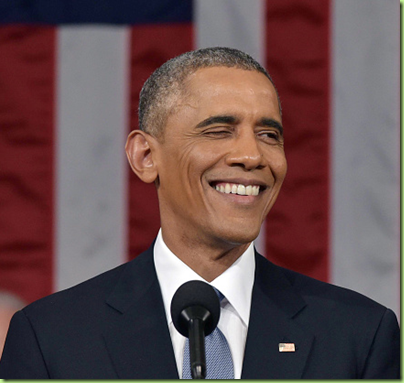 So here’s the deal: as long as the Republicans don’t dare pass bills that reverse any part of ObamaCare, Dodd-Frank or Big Guy’s unilateral immigration reforms, we can turn the page and begin to practice some better politics in Washington. Which is to say, if Big Guy continues to get everything he wants we will have a very different atmosphere around here. Because remember, if his fans hadn’t stayed home on the couch during last fall’s midterms, his policies - which were all on the ballot - would have won big.

In summary then I would put this SOTU in the record books as just another nursery rhyme: Wynken, Blynken, and Nod sailed off in a wooden shoe – because “it’s the right thing to do.”

Goodnight from the land of Winkin’, Blinkin’ and Nod.

Wynken, Blynken, and Nod one night
Sailed off in a wooden shoe –
Sailed on a river of crystal light
Into a sea of dew.
"Where are you going, and what do you wish?"
The old moon asked the three.
"We have come to fish for the herring-fish
That live in this beautiful sea;
Nets of silver and gold have we!"
Said Wynken,
Blynken,
And Nod.

P.S. I REALLY WANTED TO GET INTO THE “BIG CHEESE” EVENT TODAY, BUTT I GUESS IT WILL JUST HAVE TO WHEY(T) – H/T JTE – TILL TOMORROW.

Can Nancy even blink?

Nancy needs a calcium supplement. She looks like her skeletal structure is sagging a bit there, at least the shoulders.

That’s way too kind. It was nothing but Islamocommie hate.

Can anyone imagine George Washington, in a State of the Union address, reminding everyone that he had been elected unanimously twice?

Can anyone imagine George Washington, in a State of the Union address, reminding everyone that he had been elected unanimously twice?

Someone explain to me why Obama’s poll numbers improve when he comes out swinging at congress, yet the numbers of the Republican congress go down when they put out a tough line.

Push polling, probably.
Also, “congress” is some amorphous entity, ‘bammers is an identifiable person, so a person being attacked by a faceless entity (that has already been demonized) will be a sympathetic figure.

His numbers are higher because gas is lower. Most people don’t keep up with politics. However, if they have more spending money they give the credit to the president (mainly it is the only politician they know the name of). They are our low info voter and are growing daily.

Whoever winks with their eye is plotting perversity; whoever purses their lips is bent on evil.

The Democrats keep bragging about the lower official unemployment rate. George Will on Special Report last night pointed out that if the same percentage of the population was in the labor force as when Obama took office, the unemployment rate would be 9.9. So the apparent improvement is entirely from people giving up on trying to get a job.